I especially care for the SPLUNK!

I feel it’s probably necessary to present to the jury the case for the defence: that it really is okay to like How to Murder Your Wife, despite the rampant sexism, misogyny and chauvinism. I mean, after all, it’s a very, very silly movie. A brazen example of a “You’d never get away with it now” cheeky wish-fulfilment fantasy with a jet-black streak that can only truly be labelled offensive if you take its characters’ positions literally.

Well, okay. No. It is offensive, but it’s also clearly absurdist: it knows it’s being provocative (see the poster). The finale revolves around the idea that all married men – all of whom are harmless chumps, forced into servitude once the knot has been tied – would wipe their spouse’s out of existence if they could, at the press of a button. So the hyperbole that “The court scene turns into one of the most appalling scenes since the veneration of the KKK in Birth of a Nation” is almost as funny as the film itself. That said, George Axelrod’s screenplay, while frequently sharp in its satire, is also at times guilty of failing to put in sufficient effort.

Charles: Look at us, the last stronghold of gracious living in a world gone mad. Mad!

This is not a balanced affair like The War of the Roses (1989); Virna Lisi’s Mrs Ford – she rather pointedly lacks a first name – has no character to speak of aside from being an Italian sex bomb who bursts from a wedding cake and vies for her husband’s affections by offering him food (which makes him fat) or sex (which enfeebles him, per defocusing zooms).

Lisi has a strong presence, and as a caricature – everyone in the film is a caricature, barring perhaps Lemmon, who is simply fostered certain staunch-bachelor traits – she makes Mrs Ford vibrant and appealing. However, there’s no doubting that, when Stanley Ford (Jack Lemmon) goes back to her at the end – giving the lie to his presentation to the jury – it isn’t because he’s fallen in love in any discernible way. Rather, it’s because, in his mind’s eye, he sees her lying undressed under a bedsheet. Which is how he actually sees her at the end (she, meanwhile, takes him back without a murmur, because she’s a sex object).

Stanley has a carefully arranged, only-in-the-movies lifestyle. He’s a magnificently paid newspaper comic-strip cartoonist, such that he has his own luxury townhouse, his own butler (I mean, I say), takes daily trips to the gym and is a member of an exclusive club, all while observing a strict no-sustained-romantic-entanglements policy. He’s a kind of mash up of PG Wodehouse –a more capable, sexually-active Bertie Wooster – and Bond – his fantasy-life alter ego as Bash Brannigan.

So the rude intrusion on this routine’s very foundations – with consequent sleeplessness, burgeoning waistline, his comic-strip hero reduced to a laughing stock – represents the most unconscionable act imaginable. Stanley’s position is entirely unjustified – of course, it is – but the emphasis is on his lack of adjustment to the loss of his sacrosanct routine. The problem with the finale isn’t really that Stanley posits the suggestion (because it’s not true, right? Every husband doesn’t secretly want to get rid of his wife. Does he?) No, it’s that structurally Axelrod – previously of The Manchurian Candidate (1962) and Mickey Rooney’s racist caricature in Breakfast at Tiffany’s (1961) – has failed to make the most of his tale’s potential.

We know Stanley never had any intention of killing Mrs Ford, and we know he didn’t kill her (while anyone reading the comic strip would presumably conclude that neither did Bash Brannigan, since he buys a shop mannequin; therefore, the jury would also conclude this “evidence” didn’t wash, if Stanley’s lawyer was any kind of lawyer. But then, there’d be no third act). This was the opportunity to create some “did-he, didn’t he?” tension. Instead, How to Murder Your Wife rather lets the air out of the balloon by making his fantasy an obvious fiction; the trial is frequently funny, but it fails to pay off the observational comedy hitherto.

Yes, the daydream of life being so much better if you could wish your wife all away is effectively delivered – husbands lose their essential essence once dominated by a wife – resulting in a unison of agreement (from judge and an all-male jury). Except that… they don’t really agree, in a grass is always greener sense. Such that Stanley has no doubts about what he wants when he discovers his wife has returned. Stanley has, of course, concentrated so hard on what he is losing that he has been unaware of what he is gaining: in crude terms, a doting beauty who makes magnificent feasts and fixes any situation between them by plying him with sex (and wants to change the décor, buys a snappy dog, watches TV all night, makes a mess of the bathroom…)

Axelrod’s real payoff in the trial scene isn’t the newlyweds reunited. Rather, it’s Harold (Eddie Mayehoff), Stanley’s buddy and lawyer, allowed his worm-has-turned moment as he puts wife Edna (Claire Trevor) in her place (“Shut up, you old bat!”) It’s offered as a genuinely triumphant moment (the like of which we won’t see again until Robert Duvall lays down the law in 1993’s Falling Down).

It’s a development that provides easy cathartic laughs, with even the judge telling Edna to shut up. And yet, it doesn’t fit with our previous picture of Edna; she certainly knows how to get her way, but she hasn’t been marked her out as a vile harridan entirely ruining his existence. As such, the battle-of-the-sexes humour is more balanced earlier in the movie, as Edna educates Mrs Ford in preventing husbands from getting away with doing exactly what they want, to Harold’s befuddlement. This includes accusing him of having conversations he hasn’t had; he’s also so trained, he’ll parrot Edna’s opinions as his own to Stanley. And then there’s Stanley’s horror when Mrs Ford is incited to go to his men’s club, leading to his expulsion – in 123 years, not one woman of any description has set foot on the premises.

Another consequence of Axelrod’s structure is that Terry-Thomas – the simply splendid Terry-Thomas – is side-lined for much of the later proceedings, butler Charles having been so instrumental in establishing the picture’s heightened norm. Stanley, he announces at the outset, has never married: “He is, therefore, a completely happy man”. Like Jeeves, the news of nuptials necessitates a tendering of resignation. Charles’ horror at Mrs Ford’s intrusion on first “his” perfect abode, and then on the kitchen, is priceless.

It isn’t until the courtroom that he is given another memorable scene, unable to contain his joy at the realisation his master really “did” murder his wife (“Oh, what a silly, silly ninny I was not to have seen through it before!”) He does receive a masterstroke final scene, though, as the terrible mother-in-law turns out to be a middle-aged, gap-toothed beauty; Charles can only shrug at the inevitability of it all.

Director Richard Quine, ably supported by cinematographer Harry Stradling (who had just won an Oscar, his second, for 1964’s My Fair Lady) and infectiously so by composer Neal Hefti, is clearly at his most enthused during the first hour (it’s also the case, if we’re to be brutally honest, that the two-hour movie would have been better served if it had been a bit tighter). We have Terry-Thomas talking to camera, even gesturing for it to follow as he and Lemmon exit the house. Hefti’s score leaps from dashingly jaunty during the photoshoots (for comic strip supporting material) into the romantic strains of a fateful marriage and the change in the Bash Brannigan strip as he transforms from spy into hapless boob.

Stanley: I may take this lying down like that drooling, feeble-minded idiot that I am, but Bash Brannigan will not, I promise you that!

The expedition to arrange Bash’s murder is particularly inspired, involving as it does buying the aforementioned mannequin, along with the most powerful remote-control device in the world and tranquilisers – Alphodexabenzatheropatazelamine, or goofballs – that will have the effect of making the taker go “BRRRRP right up the wall and then Blaaaaap. Right down again” if they’re taken with alcohol (Stanley proceeds to drug first Mrs Ford and then Edna with them at his party). And then, he deposits the dummy in the ingeniously named and onomatopoeically inspired Gloppitta-Gloppitta machine.

Lemmon makes for a highly dependable, elastic lead, very much in the exasperated mode of his mid-50s to mid-60s period – before he got the idea that playing serious was his calling – and he and Terry-Thomas have fine chemistry. Mayehoff, Lisi and Trevor are pitch perfect. If Axelrod can’t sustain his conceit, he’s given all the help he could have asked for to get there.

Should How to Murder Your Wife apologise for being outmoded? I think it would only have a case to answer if it weren’t funny (although some will tell you it didn’t even pass for comedy in 1965. To which I say: to the Gloppitta-Gloppitta machine with you!) Added to which, it would be doing the makers a gross disservice to suggest they were unaware of the pitch-black, provocative and heightened terrain they were treading. 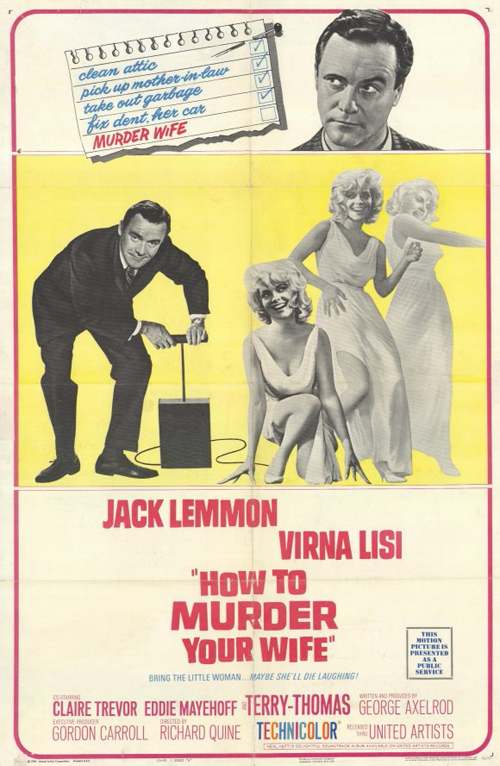