I don’t like the way Teddy Roosevelt is looking at me.

North by Northwest gets a lot of attention as a progenitor of the Bond formula, but that’s giving it far too little credit. Really, it’s the first modern blockbuster, paving the way for hundreds of slipshod, loosely plotted action movies built around set pieces rather than expertly devised narratives. That it delivers, and delivers so effortlessly, is a testament to Hitchcock, to writer Ernest Lehmann, and to a cast who make the entire implausible exercise such a delight.

Hitchcock would come up with ideas he wanted to include in Lehman’s “ultimate Hitchcock film” – a chase across Mount Rushmore, a deadly tornado (that morphed into a crop duster plane, given Lehmann needed some degree of logical progression) – and the screenwriter would weave them in. The everyman Hitch hero thrown into perilous circumstances was originally conceived as a James Stewart travelling salesman, but in the end, Lehman gave Cary Grant’s protagonist a job he’d had, that most unscrupulous of professions: an advertising executive. Who, yes, as per Mad Men, does get very, very drunk (though admittedly, against his will in this instance).

Vertigo has emerged as the most critically acclaimed Hitchcock in recent years, but North by Northwest is undoubtedly his peak as crowd pleaser. Here, he positively revels in his established milieu of giving the audience a particular type of spy movie, but this time no holds barred. It’s one of his wittiest films, features some of his best gags, and boasts the most audacious constructions in terms of suspense.

North by Northwest’s MacGuffin never really takes on more than the vaguest tangible importance (microfilm of government secrets), and the climax is of the sort that would be inconceivable today. Grant’s Roger Thornhill and Eve Marie Saint’s Eve Kendall are in peril on Mount Rushmore, Martin Landau’s sadistic Leonard about to do for them; suddenly, the latter is shot, by handy Leo G Carroll’s “Professor” and his park rangers – we also see that James Mason’s Phillip Vandamm is in custody – and Thornhill reaches to pull up Eve, who is dangling, dangling. Cut to them in an upper berth of a train which – fnar, fnar – enters a tunnel. It’s almost alarmingly economical – Hitchcock had unswerving trust in his audience – and extremely funny.

Grant complained to Hitchcock that the script was terrible (“We’ve already done a third of the picture and I still can’t make head or tail of it”), but it’s the great strength of his performance and Hitchcock’s direction that you don’t notice – or if you do, you don’t care – how it fails to function satisfyingly in terms of a classic spy yarn. It bears some similarities in its chase format to The 39 Steps, but it is even more obscure in purpose and objective. At one point, while Thornhill is up to his neck in it, the Professor is helpfully introduced to explain all the things our hero would usually have to work out for himself (that George Kaplan doesn’t exist, that they know Thornhill is an innocent, but that he’ll have to look out for himself as it wouldn’t serve their purposes to intervene). Later, when the Professor has to explain vital exposition to Thornhill, Hitch helpfully drowns him out with propeller noise.

Roger Thornhill: Kaplan has dandruff.
Mrs Thornhill: In that case, I think we should leave.

Hitchcock wastes no time throwing Thornhill into danger, but the weaving in and out of peril is most curious. Thornhill’s initially interrogated, and then, when his interrogators learn nothing, he has an auto accident arranged. Which he amusingly survives, completely blotto (one wonders why he wasn’t detained until he did talk). Then, it looks as if, for a brief spell, Thornhill will be conducting his investigations with his mother (Jessie Royce Landis, eight years older than Grant) along for the ride. She’s certainly more fun than Eve (“Gentlemen, you aren’t really trying to kill my son, are you?” she asks his pursuers in a lift; Thornhill having to explain “No mother, they didn’t give me a chaser” when he explains how came to be drunk under charge).

Eve: I’m a big girl.
Roger Thornhill: Yes, and in all the right places too.

Despite a very Hitchcock mother complex (see also his next movie) and a decidedly non-macho demeanour, debonair Grant is entirely proto-Bond in his unruffled smoothness. He may not entirely believe he is in mortal danger, but he’s full of droll quips to his kidnappers (“By the way, what are we having for dessert?”), not to mention put downs (asked by a nosy clerk if there’s something wrong with his eyes, the sunglasses-wearing Thornhill replies “Yes, they’re sensitive to questions”). His sex talk would make Roger Moore proud (“The moment I meet an attractive woman, I have to start pretending I have no desire to make love to her”; “I never discuss love on an empty stomach”; happening upon a female patient in bed, she commands him to stop, first in alarm and then because, well, he’s irresistible, isn’t he?)

Thornhill’s also highly inventive, as everymen tend to be in such plots. Perhaps the highlight of this is the auction scene, in which he proves so disruptive that he’s thrown out and thus eludes Vandamm’s men once again. He even uses the old “dollars rather than thousands of dollars” misunderstanding Mel would call upon in Lethal Weapon while trying to buy heroin. Hitchcock may structure the movie around these set pieces – the drunken car sequence; the murder at the UN building (the eye for the iconic frame, almost tableau, with Grant holding the knife in his hand); the long slow burn of pure cinema that leads to the crop duster sequence (Hitch talked to Truffaut about “moments when you have to stop time, to stretch it out”); and of course, Mount Rushmore – but you never feel as if you’re being prodded along artificially, such is his assuredness.

If North by Northwest is the epitome of Hitchcock’s American movies (as Truffaut suggested), it’s also the Grant role, his most Grant-like incarnation of himself, perma-tanned and defying the passage of time (mid-fifties but comfortably a decade younger). And, in the form of Mason, he’s ably supported by an actor who can match him in the suave stakes. Mason makes even slightly mealy dialogue work (“With such expert play acting, you make this very room a theatre”). More importantly, he’s every bit as funny as the lead, so makes the bad guy as enjoyable to watch, dryly asking why Thornhill’s shown up at the auction (“What possessed you to come blundering in here like this? Could it be an overpowering interest in art?”) Best of all, he’s entirely unruffled at being apprehended, and so makes a joke at his own expense, having previously been fooled by blanks (“That wasn’t very sporting, using real bullets” at the sight of Leonard being shot).

Eve Marie Saint is fine as the female lead, but suffers from being a post-Kelly blonde foil for Hitchcock. That and the plot requiring her to be unreadable means there’s only so much she can give. Landau is suitably sinister, offering a homoerotic undertone with his “woman’s intuition”. And Caroll, in his sixth and final teaming with Hitch, is like a comfortable old pair of slippers. Bernard Herrmann’s score is, of course, in a class of its own, along with Saul Bass’ estimable titles.

Various other thematic elements feed into North by Northwest too, naturally. The director’s favourite paranoia of an innocent man wrongly accused. Inherent suspicion of women’s motives (not just mothers’). The elemental, no further questions needed, of countries at odds as a driving (and MacGuffin) force, a narrative end in itself. Being Hitchcock, there’s an innate scepticism; while the presence of Carroll is effective short hand that these are the good guys, they are quite willing to use Thornhill to achieve their ends, every bit as much as Mason. And there are the vestments of the more lightweight classic Hitchcock narrative, whereby however perplexing reality becomes, mettle, determination and perseverance – even from an adman – will see order restored.

In a remark that would have made later purveyors of action cinema proud, the director commented, at the tail end of discussing the crop duster sequence “The fact is I practice absurdity quite religiously!” He went on to detail a scene he couldn’t squeeze into the film where Thornhill and a Ford auto assembly line worker are deep in discussion as they walk along, observing a car being put together and marvelling at it, only for a corpse to drop out when they open the door. Of his reason for not including it, Hitchcock said “Even a gratuitous scene must have some justification for being there, you know”. North by Northwest is a medley of gratuitous scenes, and the skill of it is that you watch spellbound, unmotivated to justify their inclusion.

Addendum 18/09/22: Jay Dyer identifies Huxley and Tavistock connections to Hitchcock, via Michael Minnicino, such that “the technique of creating an atmosphere of fear and paranoia related to a ‘super reality’ that is imposed upon some situation through a given narrative”. He notes Thornhill’s services are secured through sexual blackmail, the prominent modus of the CIA. Plus, The UN is good! 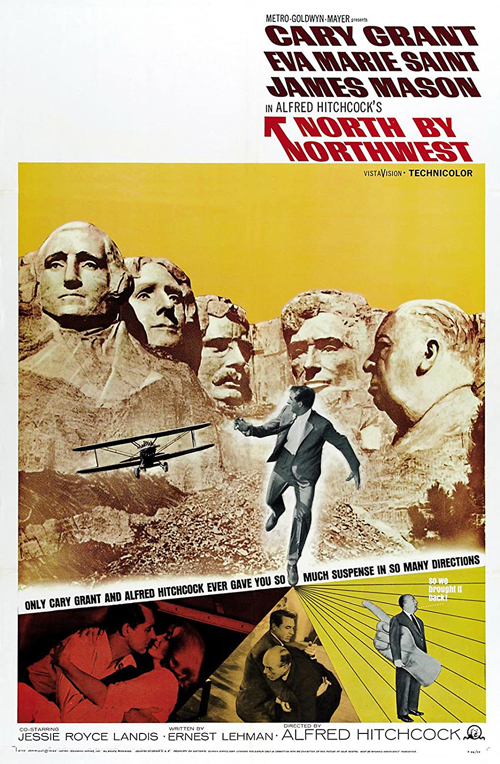