There’s nothing trashy about romance.

The Terry Gilliam film everyone loves, especially those who aren’t Terry Gilliam fans. Often claimed as his best picture, it’s one he himself says he made “in the real world”. Which is true, if you consider the real world to be composed of a slightly less sugary Hollywood confection than usual. The Fisher King finds the director making an “acceptable” film. Which is basically one the critics can fully embrace as he navigates the path he is expected to navigate when going the studio route, with a very conservative sprinkling of his own idiosyncrasy. It is essentially, fine. It’s likeable, whimsical, feel-good. Which means it finds Gilliam losing his edge.

Gilliam talks of how he went and got himself an agent, willing worked from someone else’s script, in America, and gave up final cut; all the things he swore he wouldn’t do. He purposely sold out to make a point. But the sell out is actually that he actively succumbs to the clichés of “truthful” storytelling. Which only makes it slightly less shameless than the prime offenders he would usually gleefully eviscerate. Perhaps the core problem is that The Fisher King is conceptually trite in its journey of forgiveness and healing, contriving to mash up a fairy tale and realism as if that’s possible or even a remotely good idea; Gilliam is so keen to prove he has the required skillset in dealing with depth of character that he ends up exposing how shallow the material is.

You have a Howard Stern shock jock Jack (Jeff Bridges) who develops a conscience and a drink habit when one of his listeners embarks on a massacre in a Manhattan restaurant; three years later, Parry (Robin Williams), who lost his wife in the killing, saves Jack from thugs. Parry believes he’s on a quest to find the Holy Grail (the instant lure to Gilliam) and Jack comes to the conclusion he may be able to find some kind of atonement if he brings Parry together with the girl he dotes over (Amanda Plummer’s Lydia). Jack in turn is doted over by brassy Anne (Mercedes Ruehl).

There’s nothing authentic about the conception, which isn’t a problem in itself, except that it means The Fisher King can’t support the “real” emotion Gilliam and LaGravenese try to foist upon it. There’s no substance to its depiction of the homeless, less still its main characters. Bridges is very good, very grounded and credible. But Jack has no edge. You don’t believe he’s really that character at the outset (Bruce Willis was interested, and he would probably have pulled off that part better), even if he handles Jack being a complete dick with aplomb. Bridges is almost too good an actor for the role. He brings too much focus to a part that is borderline incoherent in terms of bridging Jack Lucas with bum Jack.

More problematic is that Parry never lands as remotely believable. Whoever he was in the flashback is completely undiscernible in the homeless Parry we see. And the homeless Parry we see is whoever Gilliam and LaGravenese – and Williams – want him to be from scene to scene. So mawkish and craving love (Williams’ standard serious acting schtick), or succumbing to hallucinations, or piercing “not mad” insights (“We just met, made love and broke up all in the space of thirty seconds”) or typical Williams routines (“What were the Crusades? The Pope’s publicity stunt”; inviting Anne to come up on the table and have sex with him). There’s about as much substance here as Mrs Doubtfire. Or Awakenings. That said, if Bridges is too real and Williams too maudlin, as a duo they do kind of click; there’s definitely odd-couple chemistry between them, but I’m never persuaded by their roles, or any kind of urgency in their quest.

Which may be partly because The Fisher King is so flabby and indulgent – there’s no earthly reason it needs to be two and a quarter hours. Gilliam may boast how he eschewed storyboards, but I instantly missed them, his knowing where he is going with a scene. In broad terms, the looser he becomes as a director, the less drilled down and engaging is his vision.

The positive of the running time is that we spend more time with the supporting characters than we otherwise would. Ruehl in particular is a knockout as Jack’s long-suffering other half. In fact, she exactly gets the tone that the leads seem to struggle with, managing to be affecting, poignant, very funny and “big”. She doesn’t put a foot wrong in her performance (although, I always wince at comedy slapping of men in movies, even though, obviously, all men inherently deserve to have physical violence inflicted upon them for what they have the potential to do).

Plummer is also great, in a daffy female Crispin Glover kind of way; the tension between Lydia and Anne is perfectly pitched, and I’d go as far to suggest that the sequence where Anne is doing Lydia’s nails is superior to any scene between Jack and Parry. But then, everyone on the edges of The Fisher King fares well; Michael Jeter is an amazing scene stealer as “Homeless Cabaret Singer” with a proficiently acid tongue; when Jack suggest he’s probably fine lying in the dirt of Central Park he replies “Oh sure, yes. I like bleeding in horse shit”. Later, a scene at the station with Jack finds the latter a far more complete person than he ever is with Parry.

And if the finale feels like its competing with The Return of the King for multiple endings, Gilliam undoubtedly scores a justly feted earlier sequence at the Chinese Restaurant, shot in one camera position aided by screen wipes and culminating in Parry singing Lydia the Tattooed Lady. It’s very charming in a way the picture often struggles with otherwise, no matter how insistently mood-instructive George Fenton’s score attempts to be (in contrast, the Grand Central Waltz is quite nice, but there’s nothing show-stopping about it in the manner usually suggested).

Gilliam said of the lack of Pythons here,“I finally grew up. I became a real boy” (which is what Jack does, hence the Pinocchio motif). If that’s the case, though, the maturity the pity. As with his two previous pictures, The Fisher King garnered multiple Oscar nods, most notably in the win for Ruehl (as Gilliam noted, it proved to be something of a career killer) and Williams’ third best actor nod, the peak of the Academy’s strange attachment to his uncomfortable quasi-comic hybrid turns.

Gilliam’s next two pictures (in his American trilogy) would also be affairs he was brought in on, embellishing as he saw fit. Fortunately, both would be far superior to The Fisher King. But this movie is the strongest indicator of where he would be as a post-millennium filmmaker. Not so much in content (it remains his only romantic comedy, if you want to call it that) but in the sense of a lack of structural discipline, a willingness to let the picture sprawl languorously rather than rely on the tight concepts and visuals that defined his early work. 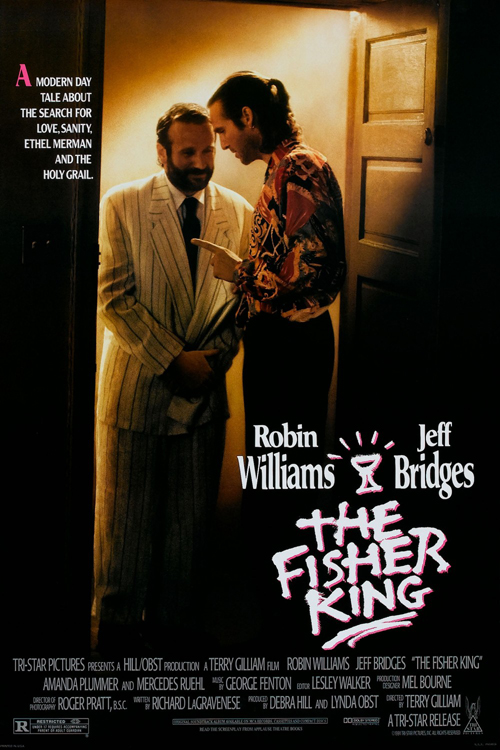