The bonniest, brightest little blue egg you have ever seen.

The Adventures of Sherlock Holmes
1.7: The Blue Carbuncle

Sherlock Holmes does Christmas. Jeremy Brett Sherlock Holmes at that. An antidote to the ghastly likes of the nu-Who festive instalments, where the only thing going for them is provoking a gag reflex for those who have overdone the turkey dinner, The Blue Carbuncle eschews saccharine and fake tinsel. Indeed, it is possessed of a proper plot, the sort of thing rarely scene in Christmas TV special episodes post-80s. Of course, that comes courtesy of the 1892 Conan Doyle original, taking a very Christmassy element – the aforementioned dinner, albeit in this case a fattened goose – and creating a mystery around it.

Holmes: Well, what of it, man? Has it come back to life and flapped off through the kitchen window?

Or what’s inside it, as it has been stuffed with the priceless titular gemstone following its purloinment from the Countess of Morcar (Rosalind Knight). And then mislaid by its thief, owing to the confusion that arises from one goose looking very like another. Holmes’ involvement is at the behest of commissionaire Peterson (Frank Mills), first puzzled by the manner in which it has been deserted (by Frank Middlemass’ Henry Baker – as it turns out, he was pished). And then again by the astonished Peterson, returning to the Baker Street sleuth on learning what lies within.

Holmes: A man with so large a head must have something in it.

As such, this adventure is particularly lacking in portentousness. It’s fairly sparse too, when it comes to the Yuletide trappings (there’s only “snow” in the final scene). Jeremy Brett’s Holmes leads David Burke’s Watson on a quest to track down the heart of the mystery. During which, he deduces Baker’s brainpower and poverty, leaves Watson unable to savour his pint after procuring information from the publican of the Alpha Inn, and cunningly persuades a disgruntled goose seller to reveal exactly where his star birds came from (they’re town bred, not country bred).

Holmes: Sadly, it is no longer here. But it laid an egg. After it was dead.

The best scene comes with the arrival of Ken Campbell’s hotel attendant James Ryder, helpfully revealing himself so Holmes and Watson don’t have to chase him down. Campbell’s on particularly good form as a rather forlorn, sad sack of human being, fretting over his rash act, having been manoeuvred into a criminality through his dalliance with the countess’ maid.

Brett’s forte can be seen here, abrupt in dismissing of Ryder’s grovelling (“No more words. Get out”) yet entirely unconvinced by the workings of official justice; prison will only turn him into a hardened criminal. Besides which “I am not retained by the police. To supply their deficiencies!” And “Maybe I am commuting a felony but I may be saving a soul”.

There’s a subplot about John Horner (Desmond McNamara) being fitted up for the crime by Inspector Bradstreet (Brian Miller, Mr Elizabeth Sladen), but it never takes on any dimensions, largely due to the fact that Holmes never crosses his path (on another occasion, his plight would have been the focus).

The episode was directed by future Star Trek: Generations bungler David Carson and features an opening taster of the carbuncle’s allure, suggestive he might have just finished watching Nicolas Roeg’s Eureka. On broadcast, The Blue Carbuncle was the only episode of the season to rise above eight million viewers (and that’s with its unseasonal June broadcast). Lest you fell into the trap of believing Brett’s Holmes was a homerun from the get go (I’d certainly laboured under that assumption).

Elsewhere, Mrs Hudson (Rosalie Williams) is predictably annoyed that Holmes and Watson dashing out will mean their food is spoiled. Which, since they finally ready themselves to eat at midnight (“Merry Christmas”) – and then, because Watson is so diligent towards the fate of Horner, delay indulging again – wasn’t unreasonable of her. There’s good reason these Brett Holmes (the early series at any rate) are held up as the finest screen adaptations of the sleuth, even if the milieu is sometimes a little too polished and set-dressed. 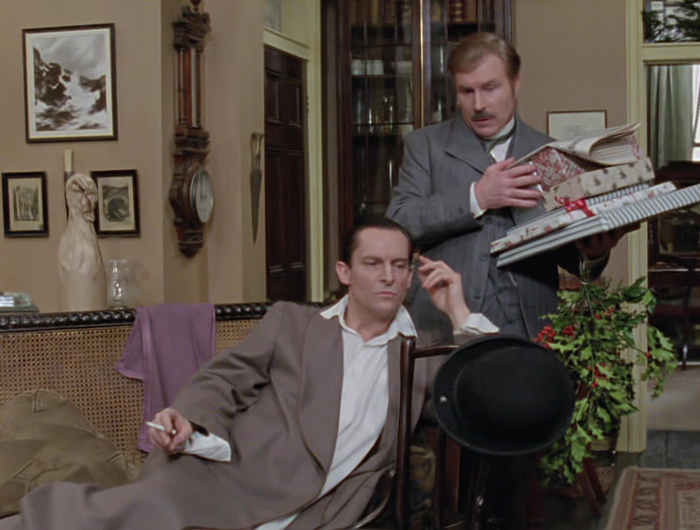 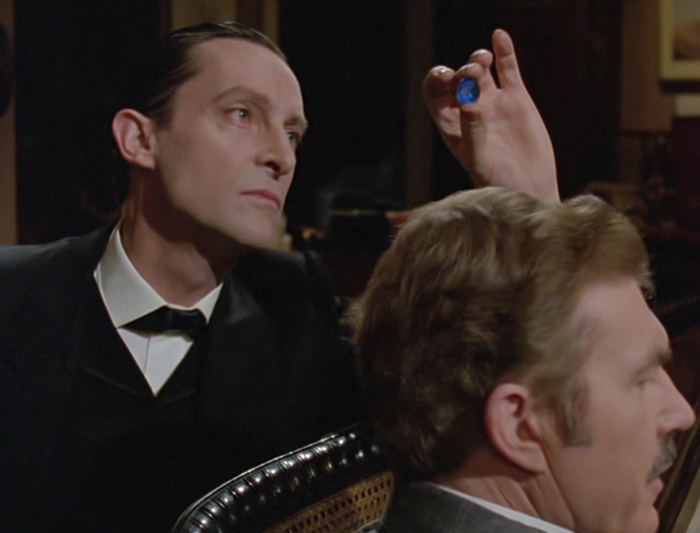