Sean Connery starring in a western sounds like the kind of lame idea a Bond star grabbing any options available would choose, just to keep working and see where he might land (see also Harrison Ford in The Frisco Kid). The result, then, is a particularly lame movie. Not in the sense of Shalako being awful, but rather entirely redundant, dull and outmoded. Aside from some content signifying the era (the rape of Honor Blackman’s character, usually cut for TV showings), this could easily have been made a decade prior. It’s only really Connery’s presence that announces otherwise.

Wikipedia makes the – unsurprisingly unsourced – assertion the Shalako has become a cult classic. I find that entirely unconvincing, as I’ve never seen or heard anyone mention it in such terms elsewhere. It’s also routinely labelled as nursing spaghetti western traits. However, aside from being filmed in Spain, where the Dollars trilogy was made, seasoned genre director Edward Dmytrk does absolutely nothing stylistically to support such a notion. Indeed, this is trad western stodge in every respect.

Connery’s the title character, introduced via a Jim Dale-penned title song (telling you just how trad it wants to appear). He’s an upstanding former cavalry officer attempting to herd a hunting party intruding on an Indian reservation to safety before the Apaches decide to take matters into their own hands. As a set up, it suggests some potential. Indeed, first sight of the party, indolent entitled folk indulging full-dress dinners in the desert complete with silver candlesticks, is suggestive of something wittier, more pointed and eccentric than anything unfolding subsequently (while there’s nothing spaghetti-ish here, this is the sort of idea Leone would have had a field day with).

And it isn’t as if the casting generally is a slouch. Jack Hawkins (voiced by future Blofeld Charles Gray) is Sir Charles Daggett, whose wayward wife Lady Julia (Honor Blackman) is more interested in a dalliance with Stephen Boyd’s tour guide Bosky Fulton. Peter van Eyck is great value as a priggish Baron (“If you had any breeding, I’d kill you” he tells Sean at one point; it turns out he can climb mountains, though, so he ends up okay in Shalako’s book). Eric Sykes is a butler and Woody Strode is Apache chief Chato. Brigitte Bardot, aside from being Brigitte Bardot, is entirely forgettable as Sean’s love interest (apparently, she was up for On Her Majesty’s Secret Service – the one, of course, Connery stupidly snubbed – which was a lucky escape, as the picture would have had none of the emotional heft). Blackman reportedly came on board at short notice, which figures, as it isn’t her kind of weak sauce (“We’re all going to die!” being a typical line).

Everything about the plot and characterisation is tepid, unfortunately. Sure, Sean is nominally sympathetic towards Native American rights (“You’re a pack of whites breaking a treaty“), but Shalako is nevertheless built upon the assumption of their violent tendencies, and concludes with him, the white man, showing moderation and leniency when he refuses to kill Chato. Worst of it is, Connery doesn’t get to be Connery in any kind of memorable way. Pauline Kael attested that “He has more presence and style (even in his indifference) than this picture deserves”, but that’s overstating his case as an asset to the production. 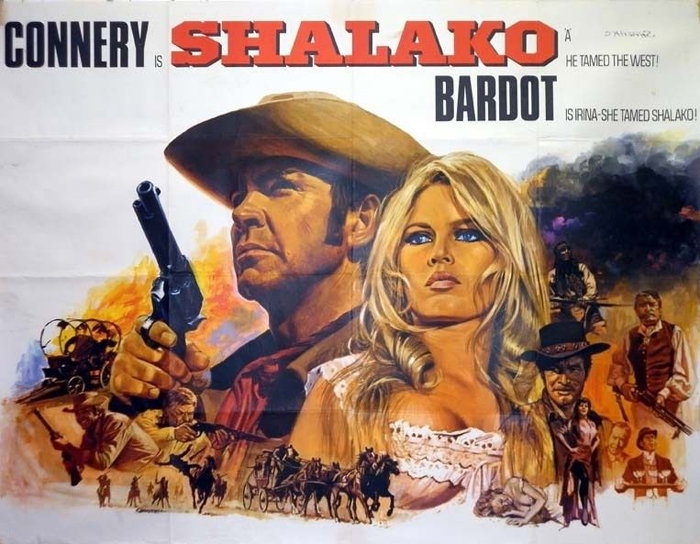