I don’t want to spend the rest of my life in Casablanca, married to a man who runs a bar.

When Harry Met Sally… is undoubtedly indebted to the oeuvre of Woody Allen, but I disagree with those who dismissed it as a shallow steal of his best moments. It lands somewhere between the Allen of Annie Hall and the knowing New York-ness of Seinfeld (and like the latter, it is remarkably honed; there isn’t an ounce of fat on it). But what mostly distinguishes the picture is that it allows itself warmth and optimism in a manner Allen would surely have scorned. Woody’s “romcoms” were all about the bittersweet, about reflecting on the loss of love in a melancholic manner. So while I’d never suggest When Harry Met Sally… is a better movie, or a better comedy, than Annie Hall, it is a more satisfying romantic comedy.

Which isn’t to say it’s a sentimental movie. Cast a Guantanamo Hanks in it, and it would have curled up and died. Billy Crystal is as crucial to the picture’s alchemy as Nora Ephron and Rob Reiner; it’s very noticeable that no one involved came close when they returned to the romcom genre (even if, in Ephron and Meg Ryan’s cases, they had box-office successes that far eclipsed it). The lore states that Reiner’s divorce was the inspiration, and he provided the famous premise – a man and a woman can’t simply be friends – which Ephron went away and turned into a story. Crucially, though, we have Crystal’s voice in there (he rewrote Harry and made him funnier) and Ephron’s decision to provide broader context and contrast (she interviewed actual couples who were rewritten and then staged with actors as punctuation to the main narrative).

Most romcoms lack sufficient bite – stand up the later Sleepless in Seattle – or more recently have descended into a romance/gross-out combo that limits their options. It’s the balance of elements that ensures When Harry Met Sally’s success. Harry’s a cynic, but an affable cynic; he’s a charmer, in a manner you couldn’t say of Jerry Seinfeld, however funny he may also be. This means Harry’s egotistical digressions (“bits”, if you like) as Sally listens on – sometimes amused, sometimes repelled, sometimes thoughtful – only rarely feel as if they’re straying into the realm of unwanted indulgences.

When you’ve seen When Harry Met Sally… enough times, the gags that don’t land are the ones that usually feel over-scripted or begging for laughs. Obviously, that’s also true of the deli orgasm scene, but the timing there is pitch perfect, complete with the “I’ll have what she’s having” punchline, so it can’t fail. In contrast, the preceding “You made a woman meow?” is trying too hard. And I can never quite decide if Harry resorting to a gag about Auld Langsyne after professing undying love is a good idea or not, since it shows him retreating into his standard comic distancing from depth of emotion (Ryan plays her reaction as benign indulgence).

I’m also not sure I ever buy that Harry and Sally are about the same age (Crystal does manage to look younger in the 1977 sequence, courtesy of, I presume, some prop hair, but not that much younger). However, Reiner and Ephron never seem that obsessed with pinning down the passage of a dozen years. There are no date subtitles, only references to the period since they last saw each other (usually after the completion of the sequence itself). Today, the era would be a whole thing, complete with laboured pop-culture signposts. But again, the Allen “timeless” route is taken – instead of Gershwin, we get Harry Connick crooning.

And if it seems as if Harry is essentially the more proactive protagonist – which he is, both in terms of talking and talking and talking, and being required to make the declaration of love that makes Sally swoon – Ephron is essentially writing herself in Sally. Crystal brings with him a “Notice me, like me” comedian characteristic, but Ryan, identified by OCD fixations, weaves Sally for the long haul. It’s an exaggeration to take Harry’s backhanded compliment of her being uptight when he first met her as verbatim truth, but Sally is the one we really benefit from getting to know as the movie progresses. Ryan makes Sally’s quirks feel germane, partly because of the naturalism she brings to the part, but also because Harry gets to act as the incredulous audience for her specific habits (such as ordering from a menu). Harry changes too, but he’s still given to grandiose generalisations. And to reading the endings of books first (Robert Ludlum’s The Icarus Agenda).

Also key is that they’re as winning a pairing as Allen and Keaton in Annie Hall, exuding a palpable chemistry; they aren’t remotely alike as performers but simply mesh on screen. We see that in the Surry with a Fringe on Top, as Crystal embraces his showman (and soon-to-be Oscar host) qualities while Sally spirals off with a toneless rendition (“It’s my voice, isn’t it? I hate my voice”). Or her masterpiece emotional breakdown preceding their sleeping together as he follows her around the room with Kleenex while she delivers a hilarious weeping monologue leading into the “And I’m going to be forty”. Eventually to be punctured by what looks like the genuine laugh resulting from invoking Chaplin (“Yeah, but he was too old to pick them up”). Which would be plausible, as Ryan’s look off camera during Crystal’s “Pecan pie?” riff was a genuine amused response, and she was looking for Reiner’s say-so to carry on.

It’s a while since I last watched When Harry Met Sally…, long enough to find it genuinely impressive both structurally and in terms of Reiner judging the tone. I might not have gone with all those fades to black (suggestive of meaning that might not be there, rather than simple ellipsis), and it was probably unwise to base two highly important sequences on the protagonists’ exes getting on with their lives, even if both are, on their own terms, first rate (the wagon wheel coffee table and the all-important having sex).

Generally, though, the picture is amazingly well judged in terms of balancing the laughs and lightness with the main themes and melodrama. Many scenes, such as Mr Zero, the post-coital shared phone call, the double date culminating in Fisher and Kirby sharing a cab, “Baby fish mouth”/Pictionary, the late-night TV chats (picking up a decade-earlier conversation on Casablanca) seem to flow effortlessly. And there’s even room in there for tastefully, not overdone, seasonal asides (Christmas, and the all-important New Year confession of love, which gets probably the most Meg Ryan of responses “You say things like that, and you make it impossible for me to hate you”. Of course, these were the days of ancient history, when Christmas week was a time of goodwill and celebration).

The movie was the making of Ryan as the romcom queen, even after Julia Roberts came along the following year, but I think it’s Crystal who deserves the unsung credit here, mostly because his persona is so fully-formed that to some it simply seems like a repeat of his schtick. Yet When Harry Met Sally… sees him fully capable of handling the serious relationship business once they have punctured their platonic pledge. If it was all about Ryan, the movie wouldn’t work.

With all the (misplaced) gushing over Carrie Fisher as Leia, her expressly comedic roles, for which she displayed much more talent and natural flair than as a space princess, have been rather forgotten. It may be that it’s the only frame of reference for many viewers, but 1989 gave us two of her most enjoyable comic turns, both in supporting roles but doing that thing of enriching the flavour of the whole perfectly. In The ’Burbs, she’s Hanks’ persevering wife, while in When Harry Met Sally… she’s Sally’s best friend, and manages to make you believe Bruno Kirby’s somewhat flavourless straight man (“baby fish mouth” aside) might in some way be loveable.

The picture’s original climax was very much in keeping with the Allen oeuvre, whereby Harry and Sally didn’t end up together (Annie Hall, Manhattan), but that relenting, and concordant humanity, is key to why When Harry Met Sally… is still more broadly beloved than Annie Hall (it’s not just because of Allen’s falling form grace). The picture deservedly received a Best Original Screenplay nod that year, but it really merited that rarity for the romcom (one Annie Hall overcame), a Best Picture nom. Particularly since it’s superior to the five films that did get nominated. Still, When Harry Met Sally…’s afterlife is the kind of reward actual awards cannot buy. 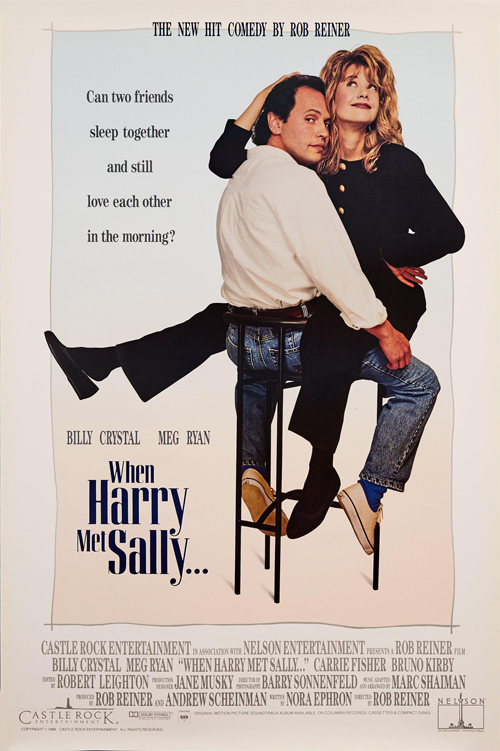