He’d better get that trunk out of there, before it starts to leak.

The consummate Hitchcock movie, and the one that probably best distils and displays his ongoing obsessions, certainly in terms of crowd-pleasing spectacle. Rear Window is rightly rarely far from the two or three most highly regarded of the director’s films, and it remains as quick, witty and peerlessly staged as ever.

You could claim the same of any of Hitch’s best-known movies, but there really is little left to say about Rear Window. It ties together his voyeuristic fascinations with a casually dour appreciation of romantic love. It’s also more risqué than I remembered. In a very ’50s way, obviously, but still: there are no bones about Grace Kelly’s Lisa Carol Fremont staying the night with invalided (thanks to a broken leg) LB “Jeff” Jeffries (James Stewart). She comes complete with luxury nightie. Even on the matrimonially acceptable side, a newlywed husband (Rand Harper) is forever escaping to the window for a quick cigarette before his insatiable wife (Havis Davenport) calls him back in to give her another good seeing to. And there’s the anecdote about Dr Crippen and his secretary, getting very intimate with her dressed in a sailor uniform.

For much of Rear Window, the pace is quite sedate, safe in the knowledge that the material has an irresistible hook. Namely, the “did he? didn’t he?” murder and dismemberment of his wife by Raymond Burr’s shockingly white-haired Lars Thorwald. And like any first-rate movie of such ilk, repeat visits fail to diminish it at all. In part, because there’s so much else going on besides, and so the pleasure becomes less the destination than getting there (the picture has, of course, been much imitated, including rip-off Disturbia and the raucously funny – even with comedy-heyday Guantanamo Hanks – The ‘Burbs).

Rear Window was adapted by John Michael Hayes – the first of a run of four mid-50s collaborations with Hitch – from Cornell Woolrich’s short story It Had to Be Murder. Hayes added all the incidental pleasures to the bare bones, everything that makes the picture so rich: the romance with Kelly; the vignettes and diversions of the peeped upon neighbours; Thelma Ritter’s deliriously straight-shooting nurse Stella.

Hitch rightly saw the visual storytelling potential and took full advantage of an elaborate set to create a Greenwich Village apartment block during a particularly sultry heatwave. The “possibility of doing a purely cinematic film” appealed, with the action taking place entirely from Stewart’s point of view; the protagonist is laid up with a broken leg. But while the picture is purely cinematic from that perspective, so much focus is on the exquisitely delivered relationships and exchanges that Rear Window could quite feasibly work as a radio play (notably, Hayes was a radio writer).

All those observed by Stewart are sketched out just enough that we find their activities as absorbing as he does, from Miss Lonelyhearts (Judith Evelyn), whose suicide attempt is stalled by an inspiring piece of music, to the extremely supple Miss Torso (Georgine Darcy). Stella suggests “She’ll end up fat, alcoholic and miserable” but in one of the picture’s few genuinely cheesy moments we see her boyfriend arrive home on furlough, a near dwarf. Then there’s the couple – Sara Berner and Frank Cady – doting on their dog, the killing of which forms the picture’s emotional centrepiece. Berner harangues the act’s lack of neighbourliness (bringing everyone to their windows, except for Burr, who sits in the darkness, only his burning cigarette announcing he is even there).

Stewart’s associates are great value too, particularly in the way he gradually drags them into his obsession. He calls cop Doyle (Wendell Corey), and it’s a fine scene, even covering objections to the conceit (“It’s too obvious and stupid a way to commit murder”). When Jeff gets Doyle to show up a second time, the conversation fascinatingly becomes more about Jeff and Lisa than the detective (“Careful, Tom” he keeps saying to Doyle, as the latter pushes the innuendo).

Ritter, I’ve mentioned, and she’s a delight, at once expressing disgust and possessed of the most lurid imagination of all of them. Before protesting “I don’t want any part of it” when she is finally offered the chance to see what was buried in the garden. She also, ensuring Hitch is careful to cover his moral bases, provides the precautionary rebuke to Stewart “We’ve become a race of Peeping Toms. What people ought to do is get outside the house and look in for a change”.

Indeed, in answer to the affability Stewart brings to the part, Hitch insisted unapologetically of Jeff that “He’s a real Peeping Tom… What’s so horrible about that? Sure, he’s a snooper, but aren’t we all?” Although, as Truffaut noted, Jeff doesn’t answer when Thorwald confronts him with “What do you want of me?” Because his actions are unjustified: “That’s right, and he deserves what’s happening to him!” commented Hitch. Chris Peachment asserted in his Time Out review “this is the one that most reveals the man” and that “Quite aside from the violation of intimacy, which is shocking enough, Hitchcock has nowhere else come so close to pure misanthropy… No wonder the sensual puritan in him punishes Stewart by breaking his other leg”.

That’s true to an extent, but this is also an incredibly human film, with a real depth of feeling. Truffaut notes that he changed his initial view that Rear Window was “very gloomy, rather pessimistic and quite evil” to one where the sights seen by Stewart are “simply a display of human weakness and people in the pursuit of happiness”. Which is rather the way I see it.

More than the murder itself, I was most engrossed in the relationship between Stewart and Kelly on this viewing, though. Truffaut again (he’s mostly on the ball in his take on this one, as it was one of his favourites, with Notorious): “… the stories have a common denominator in that they involve some aspect of love. James Stewart’s problem is that he doesn’t want to marry Grace Kelly. Everything he sees across the way has a bearing on love and marriage”. It has also been suggested that one of Hitch’s obsessions was the “terrible incompatibility of male and female positions”. Which is writ large in Rear Window, but in a hugely amiable way (it has also been suggested Hitch was determinedly unconvinced by the concept of romantic love).

And Stewart is a real stinker to Kelly (“Lisa, it’s perfect. As always”, he says resignedly of the feast she has laid on for him). At the same time, Lisa wants to mould Jeff into an acceptable form of photographer, one amenable to her lifestyle; his protestations give way to a thrill when she embarks on his obsession (“Tell me everything you saw, and what you think it means”), particularly in the close up when she returns from delivering the note to Thorwald.

And then we see starkly that he has pushed his strange fascination too far (“Stella, what do we do?” Jeff asks impotently – one might make a case the whole picture is about impotency, and that this is the crux of his resistance to wedding Lisa – as she is caught by Burr in his apartment. Managing to steal, as it turns out, a wedding ring, a prize she’s had zero luck procuring from Jeff).

Stewart brings that patented effortless charm to the main protagonist, but Kelly is equally effective, and the twenty-year age gap between them never feels inappropriate the way these things often can.* Rather like Patrick Macnee and Diana Rigg in The Avengers, it’s sustained because Kelly is so innately mature and self-possessed. Curtis Hanson referred to her here as “one of the most incredibly idealised women in movie history”. It’s hard to disagree with that when we see someone who devotedly brings Jeff food (a Hitch hankering) and who is, by the last shot, apparently resigned to his lifestyle, such that she is reading a travel book… Until Jeff is asleep, at which point Lisa pulls out a fashion mag.

Others in Hitch’s top tier offer individual riches, from North by Northwest’s effortlessly breezy adventurism to Psycho’s shock value, but it’s Rear Window that feels like the true all-rounder, delivering an irresistible mixture of popcorn and substance. It’s one worth taking a peek at whenever possible.

*Addendum 13/09/22: Whether one feels it’s appropriate that Grace was only masquerading as desirable specimen of womanhood will likely largely depend on how woke one is. 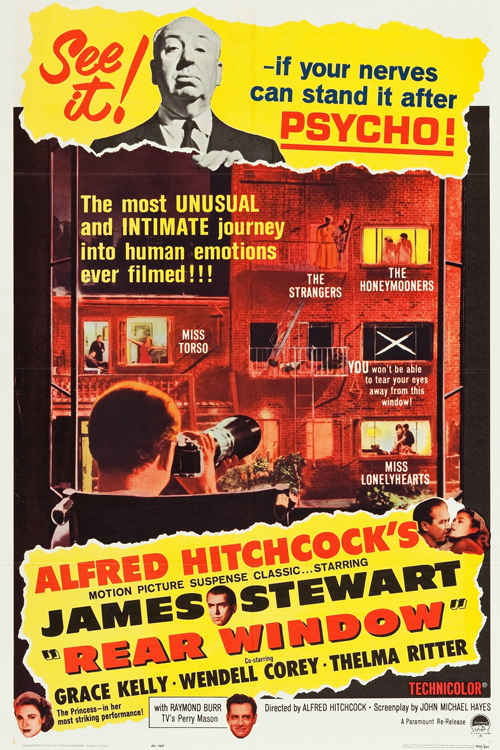 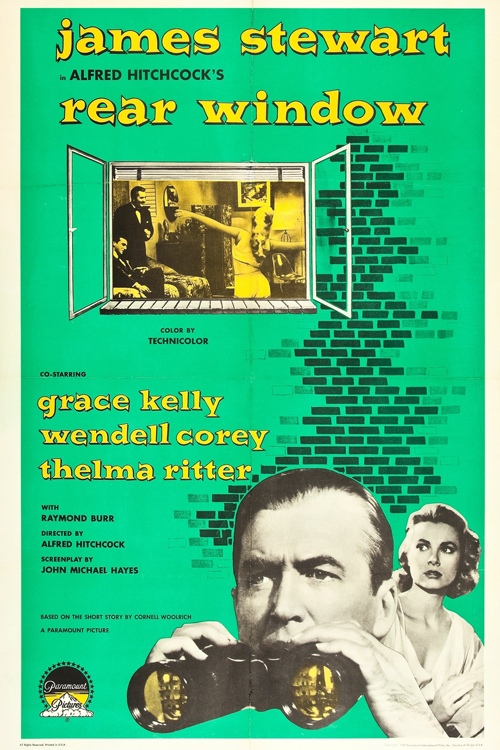