Michael Apted and workmanlike go hand in hand when it comes to thriller fare (his Bond outing barely registered a pulse). This adaptation of Martin Cruz Smith’s 1981 novel – by Dennis Potter, no less – is duly serviceable but resolutely unremarkable. William Hurt’s militsiya officer Renko investigates three faceless bodies found in the titular park. It was that grisly element that gave Gorky Park a certain cachet when I first saw it as an impressionable youngster. Which was actually not unfair, as it’s by far its most memorable aspect.

That and the casting. Hurt is solid, but not really a perfect fit for such mainstream fare, bringing ill-serving passivity and introspection to a character whose most noteworthy trait is a very capable ability to reimagine the scene of the crime and the circumstances leading up to the victims’ deaths (in the novel, Renko is said to suffer from the made-up Pathoheterodoxy Syndrome, or “misguided arrogance”). If Renko sounds like a pet detective (as in, the author’s pet), Smith would use him in a further seven tomes. I can feel Netflix calling…

Hurt’s supported by Joanna Pacula, whose character knew two of the victims, and further American muscle in the form of Brian Dennehy, filling out the kind of brawny sidekick role you entirely expect of him. If anything, there isn’t enough Dennehy, although he’s memorably disposed of at a late stage, courtesy of disembowelment by Lee Marvin’s sable-smuggling businessman. Marvin’s fine; he always makes an impression, even here where he’s called upon to underplay, but the intended Burt Lancaster would have been better.

The ante ups agreeably during the Stockholm-set closing stages of the picture, when the net draws in on Marvin. Unfortunately, though, the sheer mundanity of his operation rather lessens the impact of the web of intrigue in which Renko becomes embroiled. Sure, there’s the requisite dodgy superior (it’s clear quite early on that Ian Bannen’s Chief Prosecutor Iamskoy isn’t straight as a die), and the KGB are constantly lurking on the edges of the investigation, but Apted fails to create the kind of oppressive atmosphere that would ensure a lingering impact.

In principle, Gorky Park represents a nice shift from the norm: a Cold War thriller from point of view of the Soviets. But the movie lacks the resonance of more “authentic” western protagonist fare; maybe it’s partly the hurdle of presenting a Hollywood-ised, English-speaking tale that does for it – more recently, both Child 44 and The Girl With the Dragon Tattoo went down underwhelmingly – but the presence of a broad selection of British faces in the cast tends to underline that this is from the same era as classic La Carré, just much lower calorie (both Bannen and Alexander Know had appeared din Tinker Tailor Soldier Spy, while Hurt eschews his native accent for an English one).

You’ve also got two later Withnail & I players: Michael Elphick (as Renko’s sergeant) and Richard Griffiths. Plus Alexei Sayle as a Muscovite wideboy. Best of the lot is the same year’s Emperor Palpatine, Ian McDiarmid, in the part of a professor asked to reconstruct the faceless faces; it’s the one role where you can actually hear Potter’s voice coming to the fore – “Promise me I can have your face when the breath has left your body” – and McDiarmid relishes it.

There are other well-written scenes; Hurt meets with Marvin, more concerned with the food on his lip than the corpses; Hurt’s confrontation with Bannen in a bath house. And there’s a nimble piece of action where Renko leaps, Bourne-like, through a window to save Pacula. For the most part, though, you wouldn’t place the screenwriter’s involvement if you hadn’t been told.

Likewise, you might not realise Helsinki was cast as Russia. Unsurprising, given the less than laudatory depiction of the KGB, although the reason given for denying access was that there was no crime of the movie’s ilk there. Naturally. James Horner furnishes a disappointingly anonymous score, the epitome of intrusive ’80s blare, which rather adds to the sense of Gorky Park’s lack of finesse where it counts. 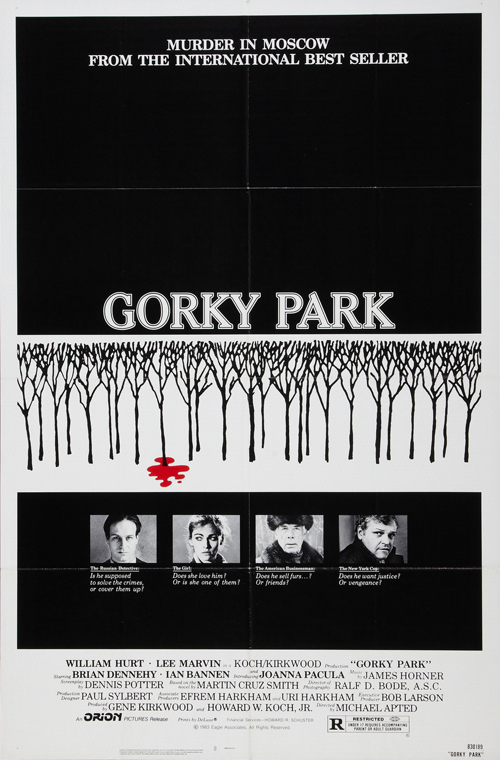