You took part in an unsavoury debauch with the scum of the convict colony!

Under Capricorn remains one of Hitchcock’s most under-the-radar films, particular so considering it comes just before his most feted, populist period. An independent picture and an adaptation of Helen Simpson’s 1937 novel, it became a massive flop; Truffaut suggested that many of Hitch’s admirers regarded it as his very best work, but I think a citation would definitely be needed on that one (apart from Cahier du Cinemavoting it one of the ten greatest movies of all time in 1958, suffering no doubt from an especially pseudish malaise). Like many of the directors’ films where you can’t readily identify what attracted him to the material, the results are simply “okay”; Under Capricorn’s a serviceable melodrama most distinguished by the self-imposed technical rules to keep him interested.

As such, it’s little surprise that Hitchcock indicated he probably wouldn’t have made Under Capricorn, were it not for his star Ingrid Bergman (their third collaboration; it was also his second with co-star Joseph Cotton). And yet, he noted her presence “made the whole thing so costly that there was no point to it”. He readily confessed getting her went to his head, the act of being able to return to England with the biggest star of the day (“I can only say now that I was being stupid and juvenile”).

Set in 1831 Sydney, Under Capricorn finds Michael Wilding’s Charles Adare – think a David Tennant type, with a similar penchant for flippant frivolity – arriving penniless and without prospects, barring being upper class and having an uncle as governor (Cecil Parker, The Lady Vanishes). The latter forbids his consorting with successful businessman Samson Flusky (Cotton). Flusky’s so successful that he offers Charles money as a means to circumvent land ownership regulations. Adare is more taken with Flusky’s lush wife Lady Henrietta (Bergman), who turns out to be a family friend. He sets himself on improving Henrietta’s health and well-being, initially with Flusky’s approval and the opposition of housekeeper Milly (Margaret Leighton, later to marry Wilding); she does her utmost to put an end to Adare’s influence and suggest something is going on between him and Henrietta.

Which it is, to an extent, although Henrietta is, in the end, devoted to Flusky. The biggest issue with Under Capricorn, which ticks along in a mildly engaging fashion, is that as much as it doesn’t want to offer an outright villain of the piece, by the same token, there’s no one really to relate to or root for. Adare has carefree charisma going for him, particularly when it comes to dealing with his overbearing uncle, but he’s too easily capable of underhand behaviour and duplicity; were he the gentleman Flusky, a commoner with a huge chip on his shoulder, disdains so much, he certainly would not have continued consorting with Henrietta when he was aware of his feelings for her. And his decision to gate-crash his uncle’s ball backfires spectacularly for all concerned, particularly since it leads to him getting shot.

Bergman, meanwhile, is so enormously wet, or soaked, that Henrietta may well have represented an appealing prospect for the “acting” challenge it promised, but her lead is rendered ineffectual and underdeveloped, with none of the agency of Joan Fontaine in Rebecca. Sure, she gets her moment at the ball, and manages to spy out that Milly is trying to poison her, but she’s otherwise a permanently wilting violet.

Cotton is fine as a hard-to-like man with a grudge, and manages to telegraph that Flusky is trying to do the right thing in spite of himself, but he never really convinces as someone Bergman would have fallen for; we need to see that in there somewhere for the picture to have any hope of balance and conflicted sympathies. Ironically, for all that Milly’s written heavy-handedly – the class divide is pertinent, but too broadly signposted – complete with confession of her feelings for Flusky at the end, I found Leighton’s the most interesting performance of the main quartet.

Hitch was critical of his own approach, but also of his choice of writers (actor Hume Cronyn and James Bridie) and the third act, which does somewhat fizzle into nothing; it looks as if Flusky, a former convict, may be sent back to the colony, while Henrietta faces the prospect of a murder charge (for the act that had Flusky transported in the first place). Everything is resolved with a conspicuous lack of tension and drama, however.

As Truffaut noted, there are some strong gothic elements in the mix that echo Rebecca, in particular the domineering housekeeper and a house full of brooding secrets; there’s even a shrunken head in a box for good measure. But Under Capricorn has very little atmosphere, or personality of location. It was shot in England and California, so there’s no real antipodean flavour. And while it’s perhaps most notable for Hitch’s use of long takes (from six to eight minutes), they feel more like a conceit than anything truly justified. I don’t think they actively harm the film – one only really becomes over aware of them sporadically, when they draw attention to themselves – but it’s easy to concur with the director’s feeling that the fluid camera was “probably a mistake, because the easy flow emphasised that the picture wasn’t a thriller”.

Hitch also expressed regret that Under Capricorn lacked a sense of humour (“If I were to make another picture in Australia today, I’d have a policeman hop into the pocket of a kangaroo and yell, ‘Follow that car!’”) To be fair, Wilding’s casual insolence does provoke occasional amusement, and there’s a nice little sequence where three competing convict cooks vie for whose breakfast will result in permanent head of the kitchen duties. It’s true however, that there’s a staid quality that rather underlines that Hitch’s decision to steer clear of period pictures in future was likely a wise one. He finds himself bound by the historical confines, rather than discovering a new arena to explore. 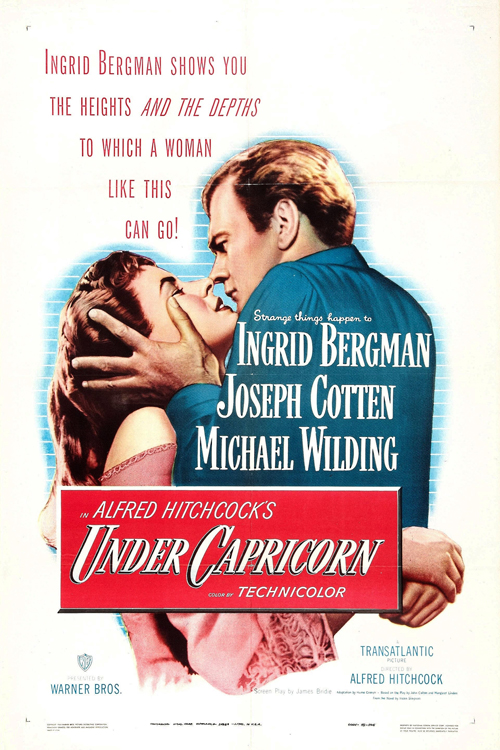