Never lose any sleep over accusations. Unless they can be proved, of course.

Watching a run of lesser Hitchcock films is apt to mislead one into thinking he was merely a highly competent, supremely professional stylist. It takes a picture where, to use a not inappropriate gourmand analogy, his juices were really flowing to remind oneself just how peerless he was when inspired. Strangers on a Train is one of his very, very best works, one he may have a few issues with but really deserves nary a word said against it, even in “compromised” form.

It’s also a picture with more than enough written about it already. It may not be quite as universally feted as his peak populist productions like North by Northwest and Rear Window, but the level of analysis awarded Strangers on a Train sees it trailing only Psycho and Vertigo. The double theme, the homoerotic subtext, dark/light, success/failure. At its core, though, is selling the “criss-cross” premise of Patricia Highsmith’s novel (in which both parties fulfil their bargain). The playful, casual way in which Bruno Antony (Robert Walker) impresses himself upon tennis pro Guy Haines (Farley Granger) and walks away with what he has decided is permission to do away with the wife (Laura Elliott) who won’t grant Guy a divorce – in exchange for Guy murdering Bruno’s father – is both crucial and masterful on the director’s part. So much so, it inspired Danny De Vito’s comic riff in Throw Momma from the Train (where the only problem is that everyone, Anne Ramsey’s hilarious brutal momma aside, is too damn nice).

The casting of the leads is key, and like the earlier Shadow of a Doubt, the director’s choices are perfect. This merits stressing, as Hitch had cause to complain (“As I see it, the flaws of Strangers on a Train were the ineffectiveness of the two main actors and the weakness of the final script”). It’s the kind of remark that even leads one to question his judgement (although, this was mid-60s, and past his peak). I could perhaps see his criticism of Granger, in terms of “the stronger the hero, the more effective the situation”, but I agree with Roger Ebert that Hitch’s preferred William Holden would have been all wrong.

The key to Strangers on a Train’s effectiveness at the outset is that Guy is too amenable, too tolerant; we have to believe his “niceness” would give Bruno an “in”. And Granger, working with the director after a much nervier showing in Rope, conveys that perfectly. He’s handsome, successful, moral, but also quite shallow, with none of the charisma or edge of Bruno; he’s the perfect opposite, essentially.

As for Walker – who died the following year – any negatives at all are baffling. Pauline Kael noted of this “bizarre, malicious comedy”, that “Walker’s performance is what gives the movie much of its character and peculiar charm”. There’s enormous amusement to be had from the supporting cast – notably Pat Hitchcock as the younger sister of Guy’s would-be fiancé and Marion Lorne as the hilariously oblivious Mrs Antony – but Walker, suggestive of a combination of Robert Vaughn and Kevin Spacey, is devious, mischievous, superior, and quite, quite mad (we know just what a bad ’un he is when he bursts the little boy’s balloon).

Bruno represents yet another outing for Hitch’s mother fixation, but in this case showcasing the classic gay mummy’s boy stereotype: stern, domineering dad and mother who can see only his positives (the scene in which Ruth Roman’s Anne goes to plead with Mrs Antony, and she dismisses her concerns, is as chilling in its own way as anything Bruno actually does). And he, being a very clever fellow, lightly mocks her throughout (asked if he is taking his vitamins, he replies “I took a bottle yesterday, mother. A whole fifth”. Looking over her grotesque abstract artwork, he has a fit of infectiously hysterical laughter, seeing his father in it: “That’s the old boy, alright. That’s father”).

Certain suspense sequences are justly famous, but some of the most fun ones simply see Bruno up to his devious business. In particular, his inviting himself along to Senator Morton’s (Leo G Carroll) party and proceeding to announce his fascinations to anyone who will listen (leading to his passing out as he relives his murder of Miriam, the similarity to Pat Hitchcock’s Barbara overcoming him). He eivdences just how batshit crazy some of his notions are (“My idea for harnessing the life force. I’ll make atomic power look like the horse and buggy”) and chats up older women (more mother types) with his perfect murder gambit. Most uproariously, he interrogates a judge’s ethics in what surely reflected one of the director’s pet views (“Tell me judge, after you sentence a man to the chair, isn’t it difficult to go out and eat your dinner after that?”)

Nevertheless, the moments we remember most are the suspense related ones: Bruno stalking Miriam at the amusement park before strangling her in the reflection of her fallen glasses, to the accompaniment of jaunty fairground music; revealing himself in Mr Antony’s bed when Guy enters to warn Bruno’s father; the brilliantly simple siding-with-the-villain suspense – how could Hitch criticise Sabotage’s climax then get behind this? – of his attempt to retrieve Guy’s lighter from the storm drain.

The latter sequence forms part of, as Truffaut referred to it, the director’s “bold manipulation of time, the way it’s contracted and dilated”. It’s notably paralleled in suspense with Guy’s tennis match (on this evidence, Hitch could have directed a whole sports movie… but only if there was a body somewhere on the court). There is a minor problem here – probably something Hitch was addressing in his disparagement of the screenplay – in that Guy is suddenly required to be very deductive in respect of the fate of his lighter, far beyond his natural capabilities. Neverthess, it’s also put together with such panache by Hitch, it scarcely matters.

The insane merry go-round scene is both a marvellous piece of effects work (compare the integration of elements here with the kind of redundant pick-ups against a blue screen that would later become the bane of his colour work) and all-the-stops out in its escalation. Everything is going on, including a little guy crawling under the ride to turn it off. That it all kicks off due to a ridiculously trigger-happy cop – by any standards – is Hitch through and through.

Generally, he has great fun with the fairground, just as he did in Stage Fright, but here with added waiting and ratchetting up of tension. Hitch objected to several studio mandates, including Ruth Roman; she’s entirely forgettable, in contrast to the rest of the supporting cast (Jack Warner insisted, and Hitch made her life miserable). Elliot is really good as a quite awful gold-digger, a shrewd move as it makes Bruno’s act that bit less horrifying and thus spreads the culpability (we don’t like her anyway).

Hitchcock also objected to the studio-imposed ending. The final line was supposed to be “a very clever fellow”, which entirely makes sense, even if the release version’s finish still feels like a very typical Hitch piece. Albeit, by this point, we’re very used to him cutting to the chase and wasting no time with epilogues; we can tell it is off tonally. The preview version, included on the Blu-ray release, is neither fish nor fowl, cutting off sooner, but on the rather slack Miriam, relieved to hear Guy is fine (“He says he looks silly in his tennis clothes”). In either form, though, Strangers on a Train is a masterpiece. 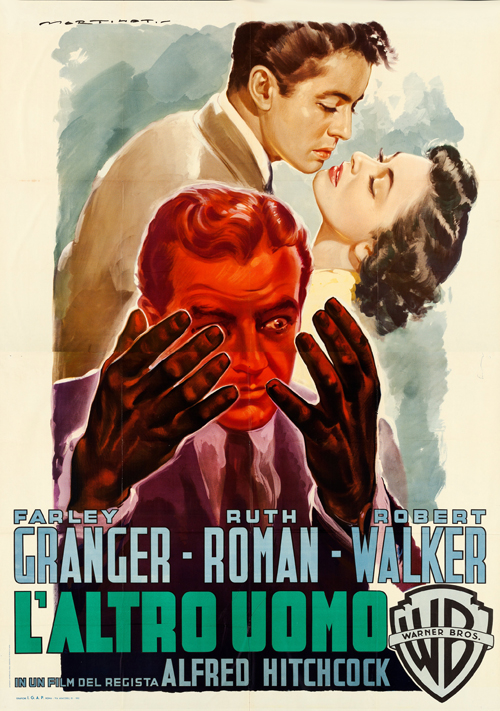 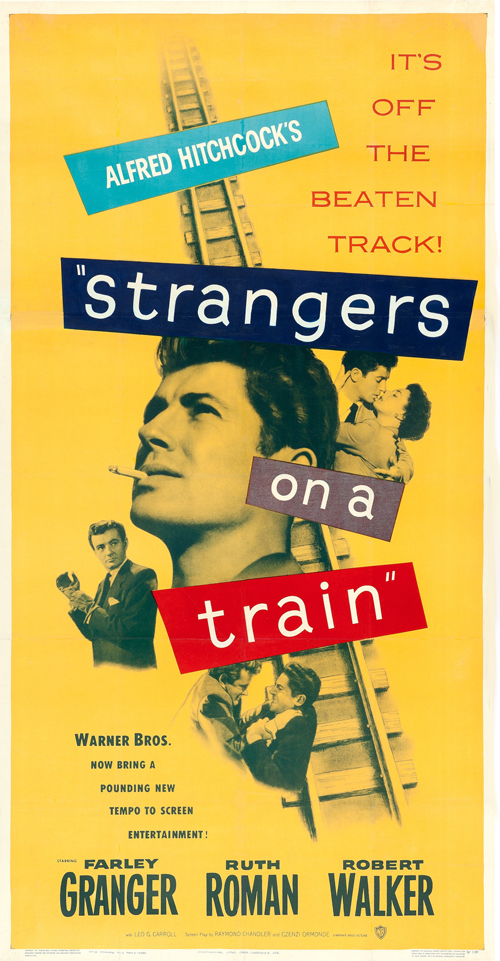 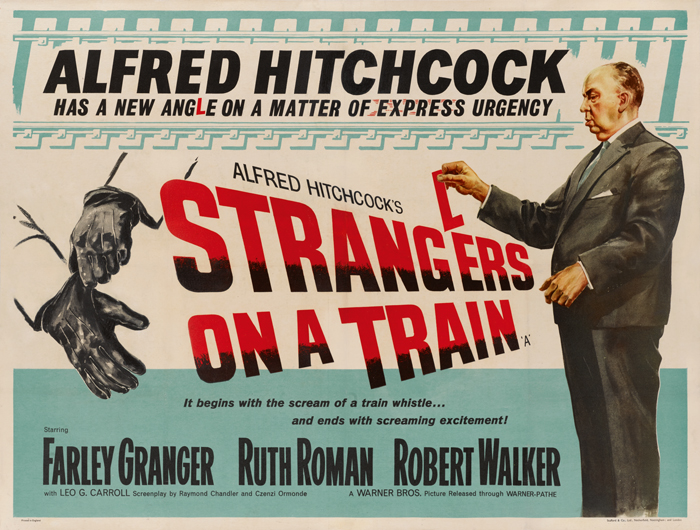