I never strangled a chicken in my life!

Rope doesn’t initially appear to have been one of the most venerated of Hitchcocks, but it has gone through something of a rehabilitation over the years, certainly since it came back into circulation during the 1980s. I’ve always rated it highly; yes, the seams of it being, essentially, a formal experiment on the director’s part are evident, but it’s also an expert piece of writing that uses our immediate knowledge of the crime to create tension throughout; what we/the killers know is juxtaposed with the polite dinner party they’ve thrown in order to wallow in their superiority.

As a consequence, Hitch’s technique is not, for the most part, intrusive or self-conscious, except on the occasions of his cuts (most frequently via a blackout on someone’s back). More distracting is the obviously artificial panoramic Manhattan skyline outside the murderers’ window. It’s fine – pretty good, even – as the evening progresses into night (this was the reshot section, as Hitch wasn’t happy with the lighting), but unflatteringly phoney before this, compounded by dirty great spun-glass clouds sitting ponderously between the skyscrapers like great blobs of porridge. Hitch explained his objective to Truffaut – between reels they were shifted from left to right – but he’d have been better to ditch them completely; they only serve to accentuate the artifice.

This was also the director’s first foray into colour. It would be fair to say his work in the medium was less consistent than his black and white fare. On this occasion, he was careful to reduce the colour to a minimum (presumably to avoid dictating the mood). In his interview with Truffaut, he asserted “I truly believe that the problem of the lighting in colour films has not yet been solved”.

The director claimed “I undertook Rope as a stunt… I really don’t know how I came to indulge in it” and “I got this crazy idea to do it in a single continuous action”. The answer is likely one of hubris, given his growing rep and attention as the star of his own pictures. He recognised that it broke with his own credo with regard to “the importance of cutting and montage for the visual narration of the story”; on this occasion, the rhythm was already set out and Rope was, essential pre-cut. If he was self-deprecating about the validity of his stylistic choice, he was correct to suggest the reason for revisiting it on his next picture was much flimsier (“As an experiment Rope may be forgiven, but it was definitely a mistake when I insisted on applying the same techniques to Under Capricorn”).

The technical dictates mean the camera is as in thrall to the actors as the actors are to the camera. And both are subject to the demands of the screenplay. It’s ironic that Hitch dismissed some of his earlier efforts (Juno and the Paycock, for example) as simply filmed plays he brought nothing to, where here you have a filmed play – Patrick Hamilton’s 1929 piece was based on the famous 1924 Leopold and Loeb case –that remains very much true to its origins (Arthur Laurents wrote the screenplay and Hume Cronyn of Shadow of a Doubt gets a story credit). The one-take choice is more the sort of conceit a director would choose today on the grounds of preserving a theatrical performance, as opposed, say to drawing attention to just how clever he is (Sam Mendes, please stand up).

The upshot, however, is that you don’t feel the performances or drama are diminished by the technique (although, Roger Ebert for one found it distracting). Farley Granger (as Phillip) and particularly John Dall as the cocky, arch Brandon are perfect Hitchcock protagonist/antagonists, committing a heinous act and thus allowing the director to play with audience sympathies when it comes to their potential discovery. We open on Phillip strangling David (Dick Hogan), and the division between them in temperament and morality that will be their undoing is instantly clear. Brandon is over-confident and unmoved by their deed, indulging abundant black humour (“Of course, he was a Harvard graduate. That might make it justifiable homicide”). In contrast, Phillip is instantly remorseful and unnerved. Their philosophical underpinnings – or Brandon’s really, since he is the motivating force – are also announced, the Nietzschean presumption of superiority that puts them on a different level. Their act has been killing for the sake of killing, “the difference between us and the ordinary man”.

But Phillip objects, and quickly spirals into drowning his guilt. Brandon meanwhile believes himself such a master that he can spin multiple plates at once while flaunting his prowess. Hence his contriving to rearrange the love lives of his friends as if they are puppets and rubbing David’s family’s faces in their deed (unknowingly dining off a surface – or “ceremonial altar” – containing their son’s/lover’s corpse). He ensures their old tutor Rupert Cadell (James Stewart) is invited, as “The one man who might suspect” and with the ring of the first guest arriving announces “Now the fun begins”. Granger doesn’t have much to play with here beyond highly strung; it’s Dall who has the really showy part, and he runs with it.

Cadell: You aren’t planning to do away with a few inferiors, by any chance?
Brandon: I’m a creature of whim. Who knows?

One might be inclined to bracket Rope with the more realist likes of Shadow of a Doubt and The Wrong Man, but despite the seriousness of its act/debate, it operates on a very heightened level, reflecting its stage origins. Brandon is constantly bating his guests, and for all his professed aloofness craves Cadell’s adulation or adoration as his perceived mentor/ubermensch equal. Which is why Stewart’s measured, contained deadpan demeanour makes for a perfect counter flow (“You always did stutter when you were excited”); if there’s a disappointment in Cadell’s detection, it comes from the handy hat as he leaves. He shouldn’t need something so obvious to deduce fully the final truth.

The fringes are also populated with memorable performances, possibly excepting Douglas Dick’s Kenneth. Joan Chandler makes a strong impact in the early stages, combative with Brandon, before Jimmy arrives to hog the limelight; it’s easy to see the grounding of the educated urban sophisticates here that would later inform the likes of The Secret History and American Psycho. Edith Evanson is the talkative housekeeper Mrs Wilson, a doddle for Cadell to mine for information, and Constance Collier is very amusing as well-to-do Mrs Atwater, lightly mocked by Cadell (being superior) but remarkably accurate in her divinatory skills (“These hands will bring you great fame!” she informs piano player Phillip).

Cadell: Think of the problems it would solve. Unemployment, poverty, standing I line for theatre tickets.

There’s also Cedric Hardwicke as David’s father, subjected to the philosophical espousals of both Cadell and Brandon. Prompted by Brandon, the former holds forth in a lightly mocking manner on the benefits of a murderous approach, before caveating, in a way the makers of The Purge would doubtless approve, that he isn’t suggesting it should be open season all year round (“cut a throat week”). Mr Kentley comments that he does not approve of the morbid humour, to which Cadell quips, “Well, the humour was unintentional”. This is the cue for Brandon to launch into an increasing rant (“Hitler was a paranoiac savage!”), but the discourse is more than enough to raise serious questions about Cadell later professing to wash his hands of his former students’ behaviour.

Brandon: Remember we said, we’ve always said, you and I, that moral concepts of good and evil and right and wrong don’t hold for the intellectually superior? Remember, Rupert?
Cadell: Yes. I remember…

Cadell’s is very much a “doth protest too much” response, failing to acknowledge the extent of his irresponsibility in acting impressionably upon young minds while failing to make it clear where he actually stands. After all, no one could accuse Brandon of being stupid or of lacking a sense of humour; it’s clear that, even if he does not advocate the extremes of enacting such behaviour, Cadell entirely relates to notions of superiority over the many (a modern analogy might be the Elite, unbound by the constraints imposed on normal mortals).

His attempt to scramble back some moral high ground from Brandon is weak and unconvincing (“… you have thrown the sound of reasoning at me, not reason itself. You have given my words a meaning I never dreamed of… They never were that, Brandon, and you can’t make them that”). And while it’s probably true enough that “There must have been something deep in you, from the very first, to let you do this thing”, it doesn’t let Cadell off the hook for lighting the blue touch paper. More even, it stresses the very delicate, responsible position the teacher/mentor holds.

The problem is, this nuanced element devolves into rather pat moralising on Cadell’s part in order to wrap things up and knock Nietzsche on the head (“…tonight you have made me ashamed of every concept I have ever had of superior or inferior beings… Because now I know the truth, and the truth is that humanity cannot be divided into categories to suit our own ends”). Still, Rope undeniably progresses Hitch’s eagerness to explore the “transgressive” in a populist way, be it moral or sexual; one can readily imagine him nodding amusedly along with Cadell’s murder speech. And following Freeman in Saboteur and the relationship of the Charlies in Shadow of a Doubt, Rope is his most explicit implicit detour yet into the impermissible with Brandon and Phillip’s gay couple.

One can only speculate at the additional tension, had original choice Cary Grant – or Montgomery Clift – played the Stewart role (Stewart, back from the war and forty, has the grey highlights suggesting a man a decade older). Or further still, if Cadell had been 29, as per the play; Cadell also being gay, and having once engaged in a relationship with one of the boys, would add a whole raft of additional and pointed context. But aside from bachelor Stewart showing “interest” in the housekeeper there’s little in the way of implication here…

Because of its iconography (Jimmy Stewart, Hitch’s first colour feature), one might get the false initial impression that Rope is a forerunner of the increasingly populist push of the director during the 1950s. Instead, it stands very much distinct and apart. An experimental piece that, for all his declaiming, really works, and which stands tautly today as one of his superior pictures. If not necessarily in a Nietzschean sense. 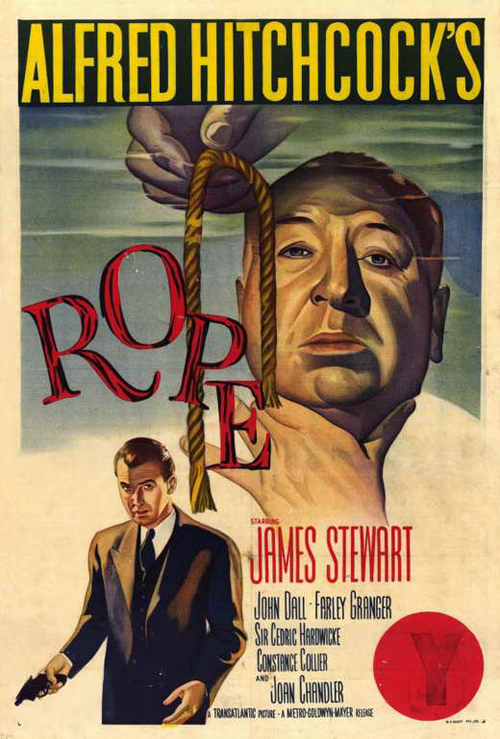