My whole family are private detectives.

Hitch pretty much dismissed this one with a wave of the jowl; he made it as a favour to Carole Lombard, so he told Truffaut. Perhaps a slight embroidery, since RKO records apparently show he actively pursued the project. Either way, it’s an appealingly light confection, unfairly neglected in some quarters, perhaps because it doesn’t feel thoroughly Hitchcockian at any point, even for a moment or two. Lombard and Robert Montgomery have terrific chemistry, and if Mr. & Mrs. Smith rarely elicits the laughs associated with a peak-period screwball, it bubbles along very nicely.

Of its stylistic inconspicuousness, the director commented that he essentially treated Norman Krasna’s screenplay as gospel (“Since I really didn’t understand the type of people who were portrayed in the film, all I did was to photograph the scenes as written”). It’s thus unsurprising he didn’t look back on it fondly, since such an approach was anathema to him. He might have been keener on it in retrospect had first choice of leading man Cary Grant been available. Nevertheless, the director’s light comic touch is a virtue, and I’d argue the playfulness here works better than the later, more esteemed To Catch a Thief or the less esteemed The Trouble with Harry.

Anything overtly risqué about the set-up, in which Ann and David Smith learn that, due to a quirk of jurisdiction, their three-year marriage is invalid, is quickly thrown into relief by the assurance that it still counts as common law. Unfortunately for David, his admission that, should he get to live it all again, he’d stay single is compounded by his failure to own up regarding the legal loophole to his already apprised now non-wife. Ann throws him out, repeatedly, and embarks on a tentative romance with David’s business partner (in law) Jeff Custer (Gene Raymond). Naturally, David’s escalating attempts to get back with her and Ann’s corresponding rebuffs eventually lead to reconciliation (via an amusing shot of her skis, lodged above her head, crossing as David bends over to kiss her).

There’s a procession of gently antagonistic vignettes along the way, offering embarrassment to one or both partners. David causes a scene at the department store where Ann has just been taken on (courtesy of an older proprietor who has designs on her), so losing her a job. At the Florida Club, David finds himself with a decidedly uncultivated date, and his attempt to escape by giving himself a nosebleed only makes his situation worse. All of which is observed by Ann, on a date with Jeff. They in turn get stuck on a ride, in a downpour, at the 1939 New York World’s Fair.

It looks as if Jeff has been earmarked as a thoroughly disreputable louse during the early stages, opportunistically inveigling himself with Ann as soon as he gets a chance and so betraying the trust of his friend and partner. But come the mid-section, Raymond is doing sterling work in nearly stealing our sympathies and disrupting our wish to see the couple reunited. Developing a cold due to the time spent enduring the elements, teetotal Jeff is forced to drink strictly medicinal liquor by Ann, by way of an amusing temperance-league anecdote (“That’s what corn crinkles do to the lining of your stomach”).

When the now inebriated Jeff confesses “My only fear is that I may not act like a gentleman”, it’s evident that, while he may not have gone about things very nobly, his intentions are honourable. Several amusing scenes follow featuring his increasingly alarmed parents (Philip Merivale and Lucile Watson), as David, continually referencing their former relationship, does everything within his power to make it look as if Ann is a bit of a tramp (“What kind of white trash have you taken up with?” implores Jeff’s father). I also wondered if a gay coding might have been intended for Jeff, on account of “It’s the most tasteful man’s bedroom I’ve ever seen”, his overtly empathic desire to see true love win through, and Ann’s insistence that he hold David’s hand.

Mr. & Mrs. Smith concludes in snowy Lake Placid, with David showing up at Jeff and Ann’s romantic retreat and feigning illness (“I will never forget you in that little blue dress” he informs Jeff “deliriously”). At one point, David pretends he’s a detective to a cabby he’s utilising to follow Ann around; perhaps, if there’d been an actual detective element to this, à la The Thin Man, the results would have satisfied Hitch more. As it was, it would be more than a decade before he ventured back into the arena of frothier fare. A shame, as it may not foreground his auteurishness, but Mr. & Mrs. Smith is an underrated romcom. 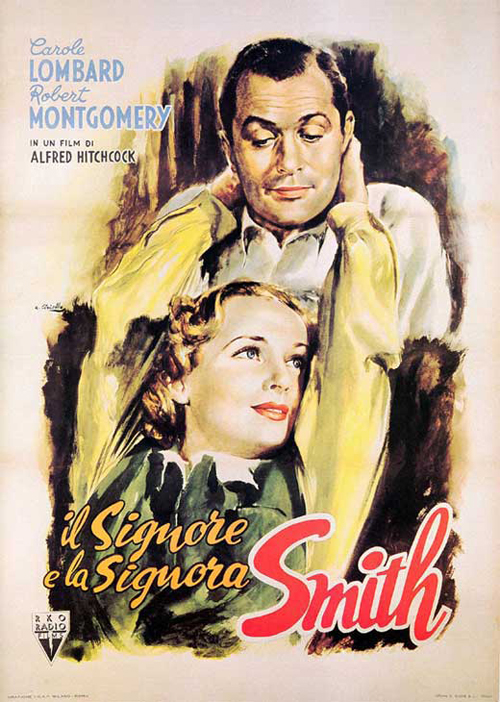