I’m an old ruin, but she certainly brings my pulse up a beat or two.

Hitchcock wasn’t very positive about The Paradine Case, his second collaboration with Gregory Peck, but I think he’s a little harsh on a picture that, if it doesn’t quite come together dramatically, nevertheless maintains interest on the basis of its skewed take on the courtroom drama. Peck’s defence counsel falls for his client, Alida Valli’s accused (of murder), while wife Ann Todd wilts dependably and masochistically on the side-lines.

Hitch seemed hung up on his ideal version, understandably so, since he suffered so many mandates from producer David O Selznick, not least screenplay rewrites (having been adapted by Alma and Hitch, then James Bridie): “He would write a scene and send it down to the set every other day – a very poor method of work”. Further, he believed the instances of miscasting were “very detrimental to the story”. He wasn’t keen on Peck playing an English lawyer (although I thought there was a touch of Timothy Dalton to his cadence). Hitchcock wanted Olivier or Ronald Coleman, and hoped to woo Garbo for Valli’s Mrs Paradine. Selznick dictated Valli, and Louis Jordan as the valet and lover; Hitch favoured Robert Newton, as he “should have been a manure-smelling stable hand”.

Certainly, Jordan is never that, but his is nevertheless a compelling performance as Andre Latour; victimised by Peck’s Anthony Keane, who is blind to Mrs Paradine’s guilt, he is suitably tortured, indignant and defiant. It is Keane who kills his case by proceeding to “prosecute” Latour over Mrs Paradine’s protestations. Finally, she confesses her culpability in court, so as to make it clear that Latour was not involved (mirroring Keane’s infatuation with her, she murdered her husband to be with Latour, who hates her for what she did, and for succumbing to her wiles).

The chief problem with the picture is that Keane’s blinkeredness is too extreme to be believable. Ultimately, that’s down to both Valli and Peck, but since The Paradine Case hinges on his obsession and refusal to hear common sense in respect of her and the case, it’s a significant shortcoming. Maybe Hitch was right, and a more experienced actor could have added layers (Peck merely adds whitened sideys). Pauline Kael complained, “Talky and stiff, the film never finds the passionate tone that it needs”. Which is true, but the talky and stiff courtroom proceedings of the second half are considerably more engaged than the rather faltering first, in which Keane does his own detective work while others recite opinions on his smitten-ness.

Todd’s Gay Keane is especially curious. Hitch referred to her as “too coldly written” but I wouldn’t quite characterise that as the issue. If she were coldly written she might sensibly have thrown her husband out. Instead she over-empathises with his every response, comforting herself in the knowledge that nothing can truly come of his mental liaison yet coming across as a self-flagellating doormat in the process. It’s probably symptomatic of the picture being so brazen with Peck’s infidelity of intent, if not deed, that the yo-yo is a paragon in the form of his wife; ultimately, she’s no more believable than her husband.

Nevertheless, Charles Laughton is dynamite as Judge Horfield (Laughton was by a considerable distance the best thing about Hitch’s earlier Jamaica Inn). He’s introduced as a dining partner of Keane, forthright in his views of any and everyone (“I do not like to be interrupted in the middle of an insult”) and shockingly lascivious towards Gay when he gets her alone-ish on the sofa.

It’s the kind of moment where Hitchcock excels, emphasising the minutiae of Gay’s discomfort (the director’s technical showboat moment, however, finds Latour entering the courtroom and round behind Mrs Paradine, achieved in two takes). During the trial, the back and forth between the dismissive Horfield and Keane, attempting to force in his agenda, makes for the best material in a picture that needs as many fireworks as it can get. Later, Horfield dispassionately relates to his wife that Mrs Paradine will be hanged, picking his teeth as he does.

Also of note are Leo G Carroll as the prosecuting counsel, Charles Coburn as a solicitor friend of Keane, and Joan Tetzel, overwritten as Coburn’s inquiring and instantly astute daughter (referring to “Men who’ve been good too long get a longing for the mud and want to wallow in it”). Ethel Barrymore is also very good as Laughton’s oblivious wife.

Hitchcock complained “I was never too clear as to how the murder was committed… I never truly understood the geography of that house, or how she managed the killing”. That aspect, however, is small potatoes, since the hows are never as important to the picture – which in any case eschews flashbacks – as motive. As usual too, he was interested in the individual at the mercy of the system, of someone who had never been in such a situation subjected to the harshness of prison; little of that translates in Valli’s impervious performance. The Paradine Case definitely isn’t helped by Peck’s presence, which serves to button the material down, but there’s enough going on around the edges to make this at least diverting. 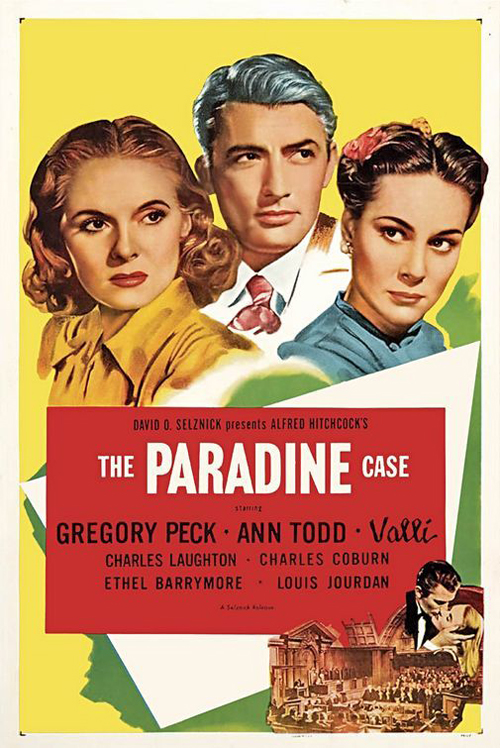