I think you’re some kind of deviated prevert.

Dr. Strangelove or: How I Learned to Stop Worrying and Love the Bomb
(1964)

Kubrick’s masterpiece satire of mutually-assured destruction. Or is it? Not the masterpiece bit, because that’s a given. Rather, is all it’s really about the threat of nuclear holocaust? While that’s obviously quite sufficient, all the director’s films are suggested to have, in popular alt-readings, something else going on under the hood, be it exposing the ways of Elite paedophilia (Lolita, Eyes Wide Shut), MKUltra programming (A Clockwork Orange, Full Metal Jacket), transhumanism and the threat of imminent AI overlords (2001: A Space Odyssey), and most of the aforementioned and more besides (the all-purpose smorgasbord that is The Shining). Even Barry Lyndon has been posited to exist in a post-reset-history world. Could Kubrick be talking about something else as well in Dr. Strangelove?

If we run with the suggestion that Kubrick faked the Moon landings (filming them, according to some suggestions, in Laurel Canyon, although that would have entailed him reluctantly leaving England), then 2001 is about something he knew to be potentially highly questionable (the nature of, and possibility for exploration of, space). Even if he did not, and took the official account of the cosmos at face value, a conspiracy to withhold a consciousness-shattering discovery on the Moon from the public is at the core of developments in that picture; it goes to the root of the protagonists’ understanding of their paradigm (the effect might be similar, say, to their learning that the Earth is, in fact, flat, or that the planets are not really what we think they are).

At the core of Dr. Strangelove too, there is conspiracy. Or perceived conspiracy, as espoused by Sterling Hayden’s uber-paranoid Brigadier General Jack D Ripper, who believes the fluoridisation of water is a communist plot to sap and impurify his (and by extension everyone else’s) precious bodily fluids. Hence, Jack drinks only distilled or rain water. The Brigadier General considers fluoridisation “the most monstrously conceived and dangerous communist plot we have ever had to face”. He explicitly links this plot to the disruption of his sex drive (“… a profound sense of fatigue… a feeling of emptiness followed” the “physical act of love”). Hence, while he does not avoid women, “I do deny them my essence”. Kubrick and Terry Southern might as well have pointed to something as ludicrous as fluoridisation causing, oh, I don’t know, the calcification of the pineal gland. But that might have hit too close to home, and besides, it isn’t nearly as funny as an emasculated army officer.

The only real difference between Jack’s theory and one whereby the Elite are responsible – “It’s incredibly obvious, isn’t it? A foreign substance is introduced into our precious bodily fluids without the knowledge of the individual. Certainly without choice” could as well be applied to vaccines – is that Jack lays it at the door of the “hardcore commie”. As we know, at a higher level, the Cold War was a lot of smoke and mirrors. Although, some are still keen to refer to the intentions of the New World Order as “communist”. Which I suppose they are, under a certain definition, but not one that is particularly helpful.

Group Captain Lionel Mandrake: I mean, after all, let’s face it. We don’t want to start a nuclear war unless we really have to, do we?

It’s Jack’s paranoia that leads to the conviction that he needs to deal with the communist threat by means of a pre-emptive strike, not having counted on the Soviets having a doomsday machine that is “triggered automatically and at the same time impossible to untrigger”. It’s a very conveniently all-encompassing device, as its name suggests, one that “cost us a small fraction of what we had been spending on defence in a single year” and it “will destroy all human and animal life on Earth” via a shroud of cobalt chlorium G, “a cloud of radioactivity that will encircle the earth for ninety-three years”.

The Soviets developed it so quickly because “we were afraid of a doomsday gap” (see also the space race, the arms race). Accordingly, their description of its possibilities is very similar to that of nuclear stalemate: “Deterrence is the art of producing in the mind of the enemy… the FEAR of attack” whereby there is an automated and irrevocable decision-making process, one without human meddling. The machine is “terrifying and simple to understand…. And completely credible and convincing”.

Of course, nuclear bombs are real, and a cobalt chlorium G bomb is not. Aren’t they? There’s no record of Southern and Kubrick being aware of the nuclear weapons hoax theory (which is, variably, that all nuclear weapons are fake but nuclear power is not, or that the whole nuclear deal is one big lie). Indeed, Dr. Strangelove played as much of a long-term part as the Cuban Missile Crisis in promoting and perpetuating the dread fear of the bomb. Albeit, in this case with an acidic streak of black humour; Kubrick had optioned the thriller Red Alert but concluded the only way to treat the inherently absurd subject matter was to make a satire (Fail Safe, in production at the same time but released after, presented the serious case).

But was Kubrick really telling a tale of elites nursing a largely flippant attitude towards the devastation of life on Earth (personified by George C Scott’s cheerfully combustive General Buck Turgidson). Indeed, in consort with Soviets (Peter Bull’s Ambassador) and Nazis (Seller’s Dr Strangelove), the picture concludes with the appealing prospect (to those present) of a great reset, one in which they get to wipe out the population and start afresh. True, events unfold accidentally in Kubrick’s scenario, rather than with united – more or less – global hoodwinking of a somnambulant populace, but the results may ultimately be seen to yield similar fruits.

Is it likely that Kubrick would make a film promoting something he knew to be a sham? Well, if he did it in 2001, why not (the initial Dr. Strangelove draft was bookended by aliens arriving on a devastated Earth and working out what has happened, a structure that carried into Peter George’s novelisation)? Which is to say, I don’t know, other than on the face of it, it doesn’t seem that he did (any more than I profess to have definitive knowledge regarding the nuclear hoax theory). Certainly, if the story that he planned to move to Australia with his family during the Sixties, on the grounds that it would likely be a safe haven in the event of nuclear war is true, that would rather scotch any such outlandish conjecture. It does rather goes against the omniscient gaze often accorded the director by retrospective acolytes of his oeuvre (the idea that he took the Cold War seriously).

In which regard, as a filmmaker openly talking about conspiracies designed to impact the health of the population and the overpowering importance of the fear of the dread weapon (whether or not the dread weapon exists), the hoax theory surely wouldn’t have been beyond him; Dr. Strangelove and 2001 both did a bang-up job of delivering the atomic and astronautic messages.

Everything about Terry Southern’s screenplay (credited with Kubrick) is top drawer, from the puerile character names (Keen Wynan’s Colonel Bat Guano is the best, even more than Seller’s President Merkin Muffley) to the emphasis on insane, antithetical logic underpinning military and political strategy (Armando Iannucci’s entire oeuvre of contrived political hysteria could have been modelled on Strangelove). It’s probably telling that none of Southern’s other screen work has the same kind of impact. Of course, he’s helped by his director’s rigour (no retiring flower in taking other people’s credit) and a lead performer at the zenith of his creative abilities (commercially too, this and the preceding year saw Sellers at his most commanding).

Sellers reportedly improvised most of his dialogue, and when you see Bull struggling not to corpse behind Strangelove, it’s entirely easy to believe it (his delivery of “Animals could be fed and slaughtered” is magnificent). Each of his performances is a gem, and while Slim Pickens is indelible as Major Kong, I do think it’s a shame that Sellers fell out (literally, allegedly) of that role. The temperamental Scott reputedly hated Kubrick for using his OTT takes, but this results in one of his very best performances (certainly his most revelatory).

True, Kubrick’s penetrative visual fixations (refuelling mid-air, Jack and his cigar, Pickens riding the bomb) are a little adolescent, but then, the basic plot of the picture was hugely influential on the movies’ biggest adolescent, the Bond series. Both The Spy Who Loved Me and Moonraker posit an evil mastermind planning to wipe out the world’s population, but for his carefully-chosen specimens intended to facilitate the ultimate reset.

Several Doctor Who stories in the decade following Dr. Strangelove also deal with plans to reset the planet, via engineered global catastrophes (The Enemy of the World) or time travel (Invasion of the Dinosaurs). And in both those cases, a select and deceived group living underground are promised to inherit the Earth. Of course, pretending there’s a virus loose, then injecting the entire populace with a poison (while engineering varied methods of culling) and herding them into megacities is much tidier in the long run, if you want that now empty, unspoilt countryside exclusively for you and your Elite pals. 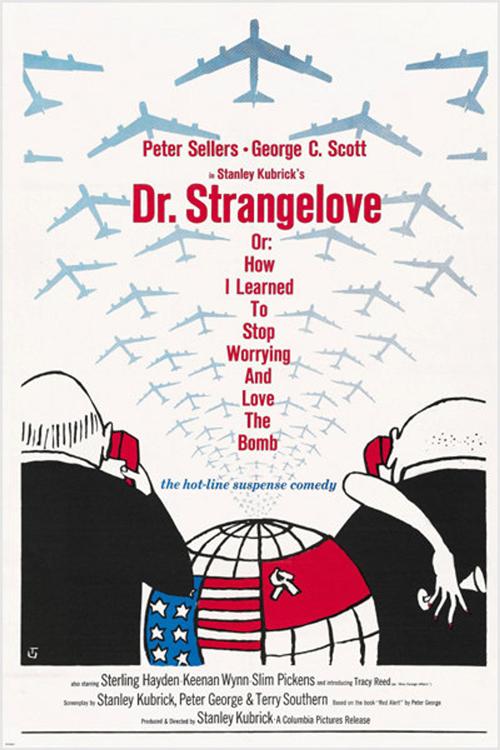 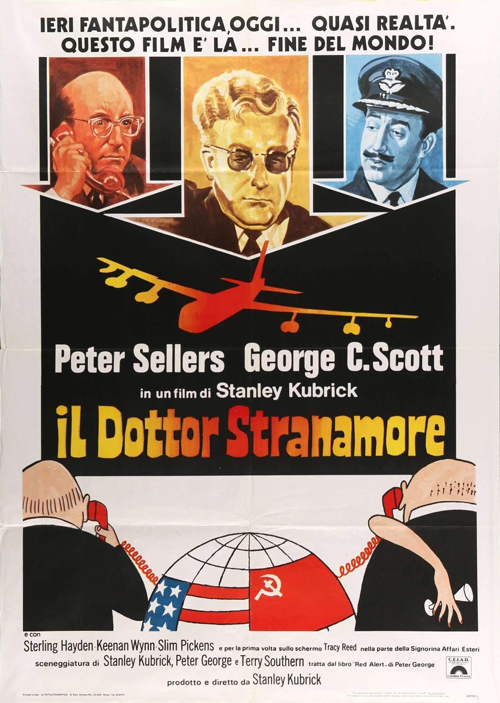