A herbal enema should fix you up.

There are plenty of sub-par Bonds in the official (Eon) franchise, several of them even weaker than this opportunistic remake of Thunderball, but they do still feel like Bond movies. Never Say Never Again, despite – or possibly because he’s part of it – featuring the much-vaunted, title-referencing return of the Sean Connery to the lead role, only ever feels like a cheap imitation. And yet, reputedly, it cost more than the same year’s Rog outing Octopussy.

I won’t rehearse all the rights issues involving Kevin McClory, who ran with a remake for an age before getting it into production (earlier titles included Warhead and James Bond of the Secret Service; later, in McClory’s attempt at another rehash, this time with Timothy Dalton, it went by Warhead 2000 AD). Connery had been involved in the production at various points since its being floated during the previous decade, although George Lazenby was also apparently mooted for the lead at one stage (he’d have been a better fit for a bastard production; with Connery, it just whiffs of bad form).

The ruthless cash grab on Sean’s part – let’s face it, whatever input he may have had, and it’s said to have been extensive, it didn’t result in any visible greater depth or quality in either the character or the production – succeeded in securing him leading man success again. And yet, it makes for an ironic anomaly at that point in his career, when he was otherwise – or was about to – reaping the greatest kudos for supporting roles (his real lead actor second wind would come as he entered his sixties).

More than Connery with a terrible rug and a series of fashion disasters (particularly egregious is the ’80s tracksuit during the health clinic episode), and his never really coming across like he’s part of a smooth ensemble – which is revealed as vital when it’s absent – is that, of all his heyday 007s to remake, the last you’d choose is the indigestible stodge of Thunderball. Well, okay, maybe not You Only Live Twice either.

I know Thunderball has its fans, and I know it was the biggest Bond movie (inflation adjusted, until Skyfall), but it isn’t actually very good. It finds the series becoming the victim of its own success, scuppered by bloated set pieces and the first really obvious piecemeal approach to plotting. All of which ends up being carried through here, because McClory and screenwriters Lorenzo Semple, Jr (illustrious fare like The Parallax View and Three Days of the Condor, as well as Flash Gordon) and the uncredited Dick Clement and Ian La Frenais (and also, some cite, Francis Coppola) are stuck sticking to the original template; veering off target would have infringed copyright.

Despite such slavishness of concept, Never Say Never Again crucially fails to carry through Thunderball’s saving graces: Connery still just about giving a toss and an Eon production that really punched up everything on screen. Just compare the idyllic Bahamas of the original to the muggy, cloudy, drab vision in the remake. Sadly, that stylistic inelegance is largely true of the entire picture. If Bond doesn’t have that surface sheen, he rather falls apart, and Never Say Never Again looks too much like any old ’80s action movie, complete with subpar score from Michel Legrand and a piece of dreadful dreck posing as a Bond song.

Perhaps strangest is that, on paper, the pedigree promised so much more, even given that producer Jack Schwartzman’s production was reputedly a shambles (Connery was never shy about disdaining those failing to meet his standards). Irvin Kershner, who worked with Connery on A Fine Madness fifteen years earlier, was coming off the lush, stylish, assured and epic The Empire Strikes Back. Never Say Never Again was none of those things (similarly, Robocop 2 would confirm that straight action material really wasn’t his bag; it’s perhaps a shame Richard Donner resisted the call).

And then there’s the crew, including cinematographer Douglas Slocombe, who made a visual feast of Raiders of the Lost Ark, and first AD David Tomblin (a godsend to many a production); there’s no lustre to Never Say Never Again. They also bring in Pat Roach as an imposing foreign brick shit house for Bond to have an extended fight with (à la the big Nazi in Raiders). Chortlesomely, he receives a face full of special agent urine.

In some respects, the transposed ransomed nukes plot ought to fit quite comfortably into the Cold War-reinfused ’80s (a nuclear countdown also features in Octopussy), but it just feels clunky and bereft of any tension or direction. There are compensations. The opening training exercise, only revealed as such after Bond is stabbed in the gut by the damsel he rescues, is quite neat.

There are several scores on the supporting cast front. Klaus Maria Brandauer is a far more impressive Largo than Adolphe Celli in the original, bringing a real psychotic flair to the part; when Kim Basinger’s Domino Petachi asks what would happen if she left him, his “Then I cut your throat” is grimly believable. And if the never-more-aging-it video game contest between Bond and Largo is the silliest sequence this side of Die Another Day (the worst of it is, you don’t even have any idea how the game works), Brandauer gives it his all in showing the character’s irritation at being beaten by Bond.

Barbara Carrera – apparently, she turned down Octopussy to work with Connery – is also a lot of fun as Fatima Blush; it’s a sadistic turn that surely inspired Onatop in Goldeneye. There’s also something a little The Girl Who Was Death (The Prisoner episode) about her following Bond around, trying to blow him up but continually failing, leading to her being blown up (thanks to an experimental Q branch pen) while obsessing over Bond writing a note attesting to her being the best shag he ever had (“I’ve just remembered. It’s against service policy for agents to give out endorsements”).

Basinger, who really didn’t get on with Kersh, is utterly forgettable as Bond girl Domino (Claudine Auger is the clear winner on that front). Albeit, she features in several memorably uncomfortable scenes, such as Bond posing as a masseur and getting his mitts all over her; when she learns he wasn’t, she looks positively exultant to have had a stranger molest her. It’s an area where the self-conscious self-deprecation of the aging Moore would have worked in Bond’s favour. Greying Connery may only have been 52, but he seems much too old for this shit, and much too old to receive all these swooning responses.

Bernie Casey is a forgettable Felix Leiter, although you might charitably suggest his casting paved the way for Jeffrey Wright. Edward Fox gives it the M caricature to full effect. Max von Sydow has a rare off day as Blofeld (he mostly ended up on the cutting room floor, apparently, such that his cat makes more of an impression).

Pamela Salem is barely in Never Say Never Again, but makes probably the most appealing Moneypenny the series has seen. Rowan Atkinson’s comic relief epitomises the problems with the picture. While it’s curious to see him deliver his patented schtick in a scene with Connery (as the Foreign Office’s Nigel Small-Fawcett), it’s also too broad and undiscerning, emphasising that the makers are willing to throw elements haphazardly into the mix without any real care over whether they mesh into a coherent whole.

Hence the sub-Street Hawk jet motorcycle chase, and the gun battle on a very obviously polystyrene studio set during the climax; you’d be forgiven for zoning out completely during this sequence, which has the benefit of not going on as interminably as Thunderball’s but the contrasting deficit of lacking that film’s superb underwater photography, complemented by John Barry’s score.

You also rather wonder why the makers insisted on releasing Never Say Never Again the same year as Octopussy, since Connery or not, it surely didn’t help its box office by arriving in Rog’s wake (in the end, it made less, albeit not substantially so). Connery should have left it at that with Diamonds are Forever – not a common view, I know, but IMO his finest Bond outing – but I can see why he felt he needed to wrestle back some audience cachet after a decade without a big hit as a leading man.

Unfortunately, while it was generally well received at the time (mostly due to Connery nostalgia and a view that Rog was too lightweight), his seventh Bond outing doesn’t stand the test of time. Less still as worthy of his iconic stature. Never Say Never Again isn’t quite Operation Kid Brother, but it is mostly a charmless, imitation Bond. 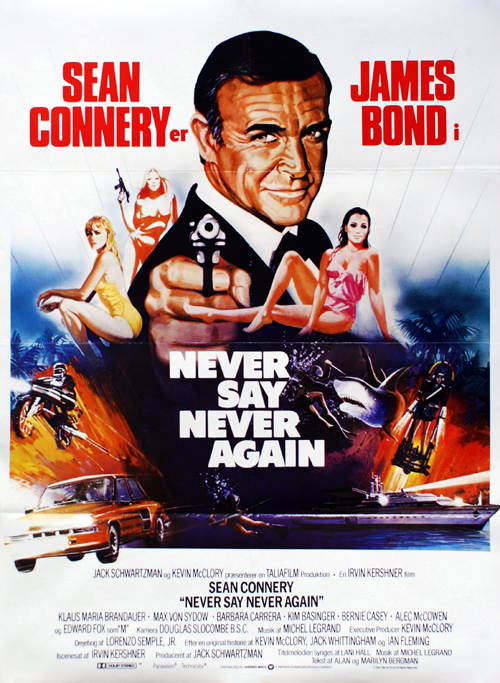 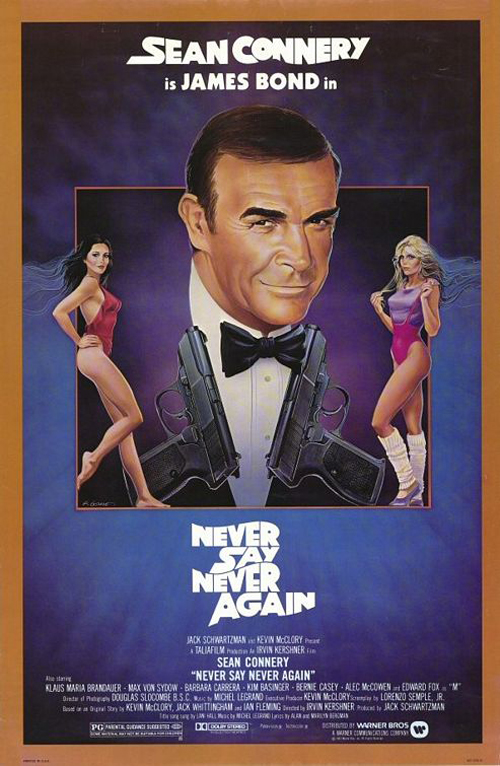