We aren’t hunting a fox. We’re hunting a man. He’s an oldish man with a wife. Oh, I know it’s war. It’s our job to do it. But that doesn’t prevent it being murder, does it? It’s simple murder.

John Gielgud, dashing (romantic) leading man? I’m unclear how many times Gielgud took the main protagonist role in earlier pictures – four, maybe? – but from the 1950s onwards, he’s chiefly known for his supporting turns. Which makes Secret Agent something of a rarity. As for Hitchcock, this finds him settling comfortably into the standard thriller format and is, relatively speaking, a lesser picture.

Hitchcock pointed to a series of what he saw as failings in Secret Agent, although at least some of those make it a more interesting picture than it otherwise would have been: “in an adventure drama your central figure must have a purpose. That’s vital for the progression of the film. It’s also a key factor in audience participation… the hero of The Secret Agent, has an assignment, but the job is distasteful and he is reluctant to do it”. Hitch considered that, because of this “negative purpose, the film is static – it doesn’t move forward”. He also regarded the botched killing – Gielgud’s Ashenden and accomplice Peter Lorre’s General mistake Caypor (Percy Marmont, also of Young and Innocent) for their German agent target – as a mistake in terms of audience sympathy.

Certainly, if your objective is to make a crowd pleaser, as his generally was, Hitch’s comments are entirely cogent. But Secret Agent marks itself out as something slightly different, both in plotting and the casting of Gielgud. The actor lends a more cerebral air to his stiff-upper-lip Brit, even when he’s coolly courting Madeleine Carroll’s fellow agent (posing as Mrs Ashenden).

Pauline Kael considered the film wasn’t altogether successful but “fixating, partly because the two male leads… are so ill-used”. She added that Gielgud “looks like a tailor’s dummy for Leslie Howard”. That’s a little unfair, albeit it’s true you can see little of the later Gielgud in this performance (for me, that makes it the more fascinating). Apparently, Hitch persuaded the actor that Ashenden was a Hamlet type, but Gielgud could see only that the director had made the villain more appealing (again, an aspect that adds contours the picture would otherwise lack; Robert Young’s Robert Marvin, coming across like an early Vince Vaughn, effortlessly schmoozes everyone,).

Secret Agent is set in 1916, albeit it’s in the nature of such things – being made twenty years later – that it feels closer to WWII. Based on a W Somerset Maugham novel and Campbell Dixon play (screenplay credited to Charles Bennett, who penned five other Hitch movies), it very much wears its distaste for making light the paraphernalia of war on its sleeve. As such, the very areas Hitch criticises as making it a bitter pill are, in fact, essential to its construction.

There are trappings of traditional fare with spymaster R (Charles Carson) sending Ashenden on his mission and Lorre as the latter’s comedy sex pest sidekick. There are quips (“Do you love your country?” asks R; “Well I just died for it” replies Ahsenden, his demise having been faked for the mission). Hitchcock delights in the suspense effects, from loud noises drowning out conversation (the death of a church organist, his foot stuck to the pedal; in a bell tower; in a – it is Switzerland –chocolate factory), to the incriminating button thrown on the gambling table, to the marvellous premonitory scene in which Lorre does the deed as Caypor’s dog and then his wife (Florence Kahn) realise something terrible has befallen him.

Young’s agent is very much the charmer – asked by Kahn if he understands German, he replies “Not a word, but I speak it fluently” – but he’s also quite unflinching, pulling a gun on Carroll and then shooting Lorre when he charitably goes to give the dying man a cigarette (not British!) Lorre’s interesting too, acting the light relief most of the time, but also given revealing touches such as his laughter – the laughter of someone left with no other response – on realising their murderous mistake: “Seems very much like these buttons are more common here than we thought”.

Carroll, reteaming with Hitch following a superb part in The 39 Steps, is expectedly very good but sadly underserved by a character who starts off looking immature, seeing war as a game in contrast to the po-faced Ashenden. Later, she just seems just stupid when she threatens to expose them if they don’t call off killing Marvin. There’s some sparky dialogue with Gielgud (“Bit fond of yourself, aren’t you?”) but he’s too stern for it ever to become zesty.

The train-set climax is suitably tense, with hanged bodies visible as evidence of the fate befalling spies in Turkey (the plot revolves around an attempt to stop the Germans securing allies the British want). Naturally, our pretend couple wind up married but swear off spying (“Home safely but never again”).

The most interesting aspect of Secret Agent is that it has no thrall to patriotic fervour. Perhaps because there’s sufficient distance from the conflict it depicts. While it is not quite close enough to the one brewing. At one point, Ashenden comments “Fighting in the front lines is a damn sight cleaner job than this”, and the message is clear enough that, whatever the service given to the war effort, it isn’t worth the sacrifice to the soul (although, he doesn’t personally get his hands dirty). This is not the kind of substance Hitchcock would often embrace, at least not so overtly. Not a forgotten gem, perhaps, but Secret Agent is rewarding as a more contemplative spy picture. 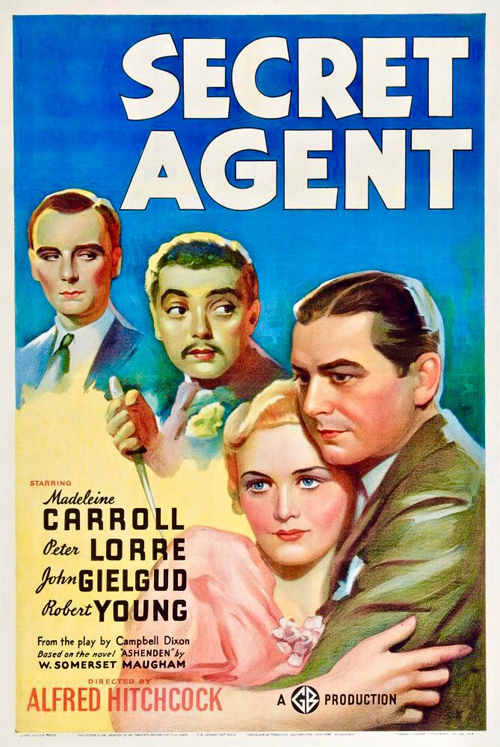