Sir, I have one question. Where do all the tubes go?

Michael Bay would probably have been better advised to remake the Michael Caine The Island, which has just the kind of excesses that would better suit his tastes. Instead, he attempted to tackle a nominally cerebral actioner and so strove to expose that it really has little going on under the hood. The Island, set just over a year ago (it begins on July 19, 2019) is at its best when it’s focusing on the plot rather than the rather rote spectacle. Which is to say that the second half of the picture becomes something of an endurance test. Michael Bay films are too damn long!

By this point, Bay had already turned the events of Pearl Harbour into a rousing action fest (when an Oliver Stone-esque conspiracy tale would have been considerably more interesting. But then, Stone didn’t even go near that with his The Secret History of America documentary series). Perhaps he fancied proving he wasn’t just the guy who could out-excess himself with Bad Boys II. It’s hard to figure for certain, as The Island is visually amped up to eleven even in conversational scenes. Perhaps Bay was making up for his undercharged leads.

McCord: Oh no, why do I get to be the guy who tells them there’s no Santa Claus.

Ewan McGregor and Scarlett Johansson are entirely bland presences as clones – or Agnates – Lincoln Six Echo and Jordan Two Delta. You might suggest that’s the point, but if so, that’s why you need actors with more natural presence. Hollywood quickly got the message with McGregor, who wouldn’t be headlining a big studio production again until last year (although, arguably the star of that was Stephen King, while the CGI bear was the main attraction in Christopher Robin). In fairness, he is quite good as his Lincoln’s human original, an unapologetically libidinous weasel…

Johansson had just segued to adult roles, and would soon segue to Black Widow; she’d never have a problem getting good parts, but would face much bigger ones making an indelible impression. Both actors being swallowed up by a Bay production bears noting; while the subject matter definitely didn’t play to the director’s strengths in this case, he undoubtedly needs leads who can anchor his maximum carnage. The strange thing is, the likes of Mark Wahlberg and Shia LaBeouf are able to do this.

The Island has a sprinkling of notable supporting presences – Kim Coates and Steve Buscemi, with Ethan “Neelix” Phillips proving just as annoying sans prosthetics – but mostly fails across the board. Sean Bean is forgettable renta-villainous-scientist Doctor Merrick, presumably cast because he could deliver competent action moves at the climax rather than because he makes a convincing genius. As the guy employed to retrieve the clones, Djimon Hounsou is possibly the least discreet operative since… well, the last Michael Bay movie. Michael Clarke Duncan meets a grisly fate. The consequence is that, with the rare exception, the movie feels very one-note, pedestrian and uninvolving, particularly once the second half has devolved into inconsequential action.

The Island was Alex Kurtzman and Roberto Orci’s first credited screenplay. Caspian Tredwell-Owen came up with the idea, although DreamWorks settled with the creators of Parts: The Clonus Horror (1979) for their a very similar premise. That itself is interesting, as I’m unsure how much The Island is really about cloning. Kurtzman and Orci had graduated from TV, notably Alias, and would soon be widely loathed for their contributions to/crimes committed against Star Trek and Spider-Man; Kurtzman is still wreaking carnage on the former (although, it’s rumoured such wanton desecration may soon end).

McCord: The life you think you has before” the Contamination”? It never happened.

The Clonus Horror concerns an isolated desert facility where clones are bred for the elite (including a US President). They are intermittently awarded the honour of going to “America”. Sound familiar? It’s pretty undeniably similar to The Island, just not as upbeat for the main parties. But you’d be forgiven for thinking the set-up of isolated innocents in a sealed environment fed a lie about their world and eventually acceding to a reward or change of status isn’t so dissimilar to Logan’s Run (for going to the Island, read the rite of Carrousel).

Essentially then, one might very easily see The Island a reset tale, illustrating how easy it would be to raise an oblivious populace (as Cristof says in The Truman Show: “We accept the reality of the world we’re presented. It’s a simple as that”). In this case, it’s as simple as telling the tale of the Contamination. It takes someone capable of seeing the limitations of the lie (Lincoln) to disrupt the enforced order of things and seed others’ doubts (most amusingly, the confusion over where all the tubes go).

Lincoln is the equivalent of a Flat Earther, or a Truther (like Orci). Winning the Lottery in this environment is tantamount to religious salvation or retirement (significantly, the clones have no knowledge of sex or spirituality: “What’s God?”). The Island “is the one thing that gives them hope…. Gives them purpose”. It represents something to invest oneself in above all else. Knowledge and understanding are withheld, such that the clones are “educated to the level of a fifteen-year-old“. So pretty much as we are, give or take.

There are some nice touches here, Kurtzman and Orci recognising the struggle to make sense of a world that does not. Phillips’ Jones Echo Three uses numerology to attempt to make order of the processes controlling his environment (suggesting that those selected for the Island can be predicted). Unfortunately, his system is so convoluted it comes out as nonsense (in a world where the conspiracy theory-minded can have a tendency to brandish rudimentary numerological or gematric tools wherever one looks, to “make sense” of things, that sounds about right).

McCord: Well, just because people want to eat the burger, doesn’t mean they want to meet the cow.

But from the cloning point of view, the movie doesn’t have too much to say. The Island uses the classic Hollywood set up of a bad seed going out on a limb (meaning order will be restored once the picture ends). We’re asked to believe the Department of Defence is unaware that Merrick has been breaking the Eugenics Law of 2015, which instructs that clones may only be grown if they remain in a persistent vegetative state (such a precondition is an all too believable “safeguard” for permitting such activity). This at least acknowledges the prospect of public objection to such unethical behaviour; Never Let Me Go, another cloning pic, leaves it as an unaddressed elephant in the room.

According to Merrick, it was discovered that clones could only become suitable donors for their rich doubles through being grown fully conscious. He and his employees, aside from Buscemi, maintain a dissociative attitude towards their humanity, as one would expect. “It’s a product… not human” and “They have no souls”. Desensitisation is such that they are in fits of laughter at the traumatic escape attempt by Starkweather Two-Delta (Duncan).

Lincoln: A dump? Take it where?

There’s no real attempt to investigate the identity of the clones beyond these markers, though, or the process by which Lincoln develops the memories of his original. Once Lincoln and Jordan escape the facility, much of the potential is dropped in favour of hyperbolic action sequences and determined escalation, such that by the third act, Lincoln is delivering a more than serviceable impression of his human counterpart.

Perhaps Orci and Kirkman’s reticence is because, in contrast to their 9/11 parable Star Trek into Darkness, they feel the jury’s out on actual cloning. It is, after all, one of THE big conspiracy theories, with frequent evidence of glitchy clones breaking down cited on YouTube, be it Hillary, Eminem or numerous news anchors.

Equally, there’s dispute as to whether what we are seeing in many of these cases really does represent clones; maybe they are variously deep fakes, doubles, or MKUltra subjects springing a leak. Or something else besides. You have a line of this kind of duplicate narrative running from The Beatles through to Dave Chapelle. It could be another smoke-and-mirrors psyop, masking what is really going on. After all, it wasn’t so long ago that Donald Marshall’s explanation for celebs and politicians’ prominent black eyes related to lurid tales of Vrill/aliens possessing them (soul scalping), in tandem with accounts of underground cloning centres/fight clubs. Currently, that has been supplanted by association of the black eye with adrenochrome – which, not dissimilarly to The Island, also promotes the Elite cannibalising victims to sustain their youth and vitality.*

Guard: You two, watch your proximity.

Then there’s the side of The Island that may represent predictive programming. It’s set in 2019 and concerns secretive and illegal activities that favour the Elites. Those subjugated are required to maintain a safe distance from each other and fed lies about the dangers of their environment (the idea of global contamination “keeps them fearful of going outside”).

Lincoln: Why is everyone wearing white all the time?

Ultimately, though, The Island offers slim pickings. There’s some nice production design from Nigel Phelps (Bay didn’t like his big train, but the Coma-esque room where clones are indoctrinated with key words – “You have a very special purpose”; “I want to go the Island” – is memorable). Unfortunately, though, Bay’s frenetic style and Mauro Fiore’s complementary cinematography tend to avoid letting anything stand out. Sometimes, such an approach can distract from the issues with plot, but in The Island’s case, it shows up that everything is pretty shallow.

*Addendum 12/09/22: Best to stick with the Marshall explanation. 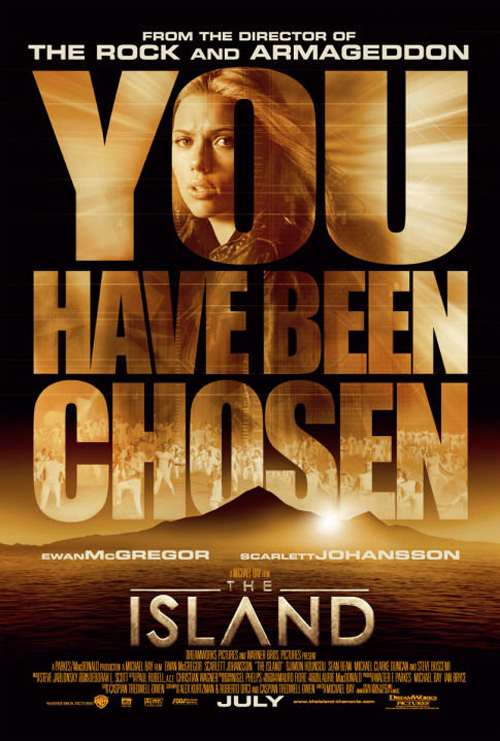 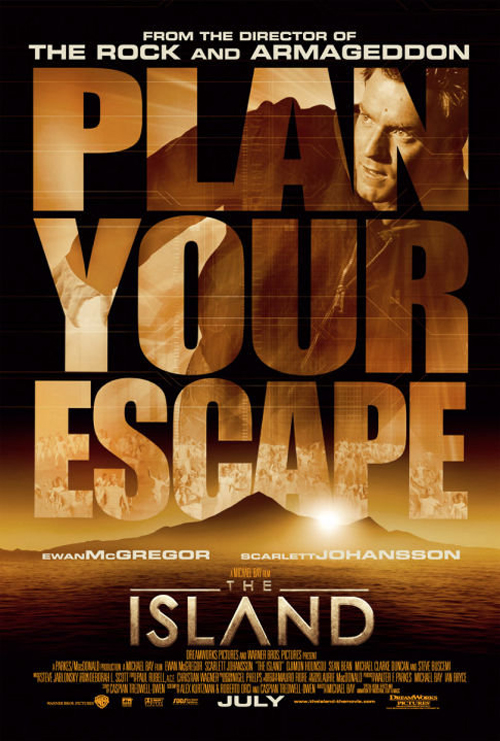