How can a picture of a field be sad without a sad person looking sad in the field?

Like Terrence Malick, Charlie Kaufman appears to have crossed the threshold into self-parody. His adaptation of Iain Reid’s 2016 novel brings out the absolute worst in him, such that he’s trapped in a causal loop of incontinent doodles, espousing on familiar obsessions with existence, time, relationships and meaning (or lack thereof), all wrapped in a bow of self-reflexive, acutely self-conscious weirdness. The difference on this occasion is that he brings a rather rote gothic-horror unease to the proceedings, which makes I’m Thinking of Ending Things seem all the more facile in its repetitions.

Because this is the same Kaufmann who suggested a serial-killer movie The 3 in which the killer was all the characters (in Adaptation). Which, in premise, was startlingly similar to the following year’s shlock thriller Identity. Which, in turn, is at times off-puttingly similar in its faux-dream/memory/subjective trappings and causal incoherence to I’m Thinking of Ending Things. With some sub-Lynch warping of character thrown in. For other “It’s all gone a bit weird” exercises stretched out to endurance-test lengths, see Aronofsky’s mother! and The X-Files’ Triangle (and the movie Triangle, which is quite good). Even The Fantastic Journey’s nightmare house episode Riddles. Which is to say, this isn’t anything new.

Kaufman, of course, delivered something along these lines to vastly superior effect in Eternal Sunshine of the Spotless Mind. The distinction being, there you were engaged by the characters beyond a mere intellectual curiosity. Here, Kaufman is so set on deconstructing his substitutes and being playfully perverse/sinister/elusive that any pretence at real involvement with the outcome quickly falls away. By the halfway mark, I’d established that I’m Thinking of Ending Things wasn’t going to yield anything valuable or rewarding. Simultaneously, however, if one were so inclined, it would be easy to claim it to one’s bosom as a deep and meditative rumination and exploration of the human spirit. Or the subjugation and affliction thereof. Or some such cobblers.

Because I don’t have much patience with a narrative structured in such a wilfully oblique manner. Oblique, and yet thunderingly obvious. Variety called I’m Thinking of Ending Things “didactically morose” and I can go with that. It’s desperately one-note, repetitious in its characterisation, oddity and theme. And essayistic, with Kaufman unable to resist showing off in his obsessions, digressions and pet peeves.

From the off, we’re alerted to fringe strangeness when we’re privy to an old man observing our main couple, Jessie Buckley’s unnamed character and Jesse Pemon’s Jake, set off to visit his parents. And Buckley’s interior monologue makes it clear things are decidedly off between her and Jake. But it’s only when they arrive at the family farm that it becomes evident Kaufman, per his source material, will not be following a coherent narrative, or one in which mysteries deliver satisfyingly coherent answers. Jake’s mother (Toni Collette) and father (David Thewlis) continually shift back and forth in age throughout the young couple’s stay, with scenarios shifting with them; neither Buckley nor Jake proves entirely cognisant of this.

Her key notes change too (she is variously studying virology, physics and gerontology, employed as a waitress, and possesses talents for poetry, painting and in-depth film criticism). The family dog keeps appearing at the door wet, like a glitch in the matrix (later, we see a skip full of their discarded iced drinks at Jake’s old school, rather recalling the pile of dead Melissa Georges in Triangle). She becomes confused by a childhood photo of Jake on the wall – later, like Jake, she professes “I grew up on a farm” – which she thinks is actually her.

Quite quickly, it becomes evident that the janitor is an older version of Jake, but during the house visit I began to think every character might be interchangeable or combinations of older/ younger messed-up versions (the Tulsey Town girls are evidently mocking him because he’s a lowly janitor from their school). That I had no particular yen to disentangle this says a lot about how limp its “puzzle” is. Particularly when it comes to enacting their relationship through the medium of dance.

Whether or not everyone is Jake/janitor in Kaufman’s take, the novel makes it clear that Buckley and Jake are the same person – she was simply someone he failed to ask out, so he wrote about her at some indeterminate point to make their relationship “real”. So in this context, Buckley functions as something of an NPC becoming self-aware, if you like.

In the movie, janitor Jake dies in his snowy car or doesn’t (there’s an engine sound over the end credits), but the pervadingly despondent tone makes it clear: life is pretty sour, and likely only amounts to anything through the fractured subjectivity of one’s own mind. “There is no objective reality” says Jake at one point, operating as a typically sunny solipsistic Kaufman surrogate. This is a film where one doesn’t need much to assume “Other animals live in the present. Humans cannot. So they invented hope” is the authorial position.

The picture, filmed in early 2019, manages to yield its share of (unintentional) topicality. “Viruses are monstrous” suggests Jake. Buckley replies “Everything wants to live, Jake. Viruses are just one more example of everything”. Bechamp might disagree with that, but it’s interesting how a conversation such as this – I’m not going to accuse the eccentric Kaufman of predictive programming – takes on additional significance it otherwise wouldn’t.

Indeed, Kaufman evidently thinks “Even fake, crappy movie ideas want to live” – like Bob Zemeckis ones, presumably, or those from Billy Crystal, who is a nancy – is the rub of this discussion. It’s certainly entirely in tune with his inherently disenchanted snobbery. He later has Buckley reciting a vast glob of Kael’s review of John Cassavetes’ A Woman Under the Influence (Jake has a volume of Kael’s collected reviews in his untouched childhood bedroom). Kaufman is persistently scornful of his adopted medium, movies being “pre-interpreted for us. And it infects our brains”. Such casual brainwashing is reinforced by lines like “Maybe we’re all just programmed, right?” and “I wonder what it must be like to be a sheep”. One can find a disorganised resonance here, if one wishes.

There are things to like. The performances are all first rate. I enjoy Thewlis dissecting Buckley’s pseudy artistic pretensions (regarding imbuing emotions on landscape paintings). Her derisory dismissal of most people – “Their thoughts are someone else’s opinions, their lives a mimicry, their passions a quotation” – before adding “Oscar Wilde” made me laugh. Kaufman’s observation of petty disputes (the distinction between assertion and assertation – “They’re both words”) and the morass that is the constant monitoring of one’s acceptable language (“when homosexuality was considered a pathology” she is forced to elaborate after Jake questions her implication). These are classic Kaufmanisms, caught in the quagmire of life, language and society where a man liking musicals immediately suggests a sexual preference and romantically singing Baby It’s Cold Outside elicits “You’re gonna quote a rape song at me?”

Kaufman’s insistent referentiality to other texts and mediums as filtered through Jake’s fantasy – Indiewire has it that “Jake… has so fully absorbed the media surrounding him that it seems to govern every aspect of his reality” – is all well and good, except that it doesn’t really seem very different from the writer-director’s standard schtick. I’ll admit, I didn’t spot Jake’s acceptance speech was a lift from A Beautiful Mind, but I rather think that’s in my favour.

I’m Thinking of Ending Things seems the most fitting of Kaufman titles, ostensibly about a breakup, but being Kaufman, we know what it’s really about. As the animated porker says to the naked janitor, “Someone has to be the pig infested with maggots, right?” Someone has to be Charlie Kaufman, right? 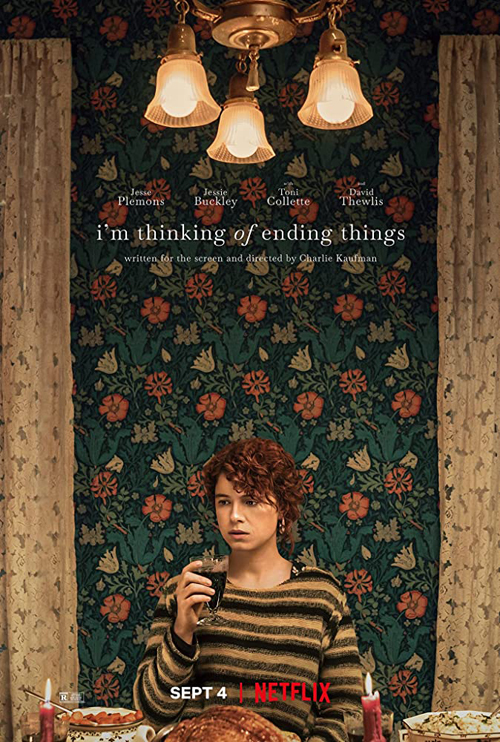