The President is dead. You got that? Somebody’s had him for dinner.

There’s a refreshingly simplicity to John Carpenter’s nightmare vision of 1997. Society and government don’t represent a global pyramid; they’re messy and erratic, and can go deeply, deeply wrong without connivance, subterfuge, engineered rebellions or recourse to reset. There’s also a sense of playfulness here, of self-conscious cynicism regarding the survival prospects for the US, as voiced by Kurt Russell’s riff on Clint Eastwood anti-heroics in the decidedly not dead form of Snake Plissken. But in contrast to Carpenter’s later Big Trouble in Little China (where Russell is merciless to the legend of John Wayne), Escape from New York is underpinned by a relentlessly grim, grounded aesthetic, one that lends texture and substance; it remains one of the most convincing and memorable of dystopian visions.

Of course, we never get to see what the rest of America looks like, lying as it does outside the fifty-foot wall surrounding Manhattan island maximum-security prison. The America where all the (caught) criminals aren’t living (Carpenter refers to a police state). But that’s rather the point. This is America, to all intents and purposes: an America of degraded echoes of its former glories. One of the pleasures of the introductory episodes on the island prison is seeing shambling attempts at retaining old routines, in particular Cabbie (Ernest Borgnine) driving around the familiar neighbourhood, but now with Molotov cocktails to hand, or visiting a less than polished vaudeville production.

In keeping with that microcosm/ macrocosm, the Duke of New York (Isaac Hayes) is essentially the president of this independent state, and proceeds to ritually humiliate and emasculate the actual President (Donald Pleasance, note perfect as cossetted privilege unnerved to his core by the world he has crashed into; his jubilant slaughter of the Duke, to the mocking refrain “You’re the Duke of New York! You’re A-Number One” has all kinds of resonance, particularly coming from a man who holds the nuclear keys).

Carpenter and Nick Castle envision the essential breakdown of society much as George Miller did with Mad Max a few years before; crime and lawlessness have spiralled unchecked, leading to the decision to sweep the perpetrators under the carpet. The carpet being Manhattan Island. But the backdrop of this 1997 is the world of the ’70s; the President ends up in his pickle thanks to a terrorist hijacking (the Soldiers of the National Liberation Front of America), and there’s a Cold War about to go hot brewing (the President is due to attend the Halford Summit with Russia and China, the outcome of which will decide the survival of the human race).

Snake himself is a veteran, having served in Leningrad and Siberia and earned two purple hearts (subsequently, he attempted to rob the Federal Reserve, so he’s definitely on the side of the angels). As William Gibson noted of “You flew Gullfire over Leningrad, didn’t you?” such world-building nuggets of information dropped into the script are the stuff of great mythos (and the laborious and redundant attempts by fans to prequelise or fill in the gaps).

Carpenter’s film exists in a perma-night, save for a few shots outside Manhattan, leaving the picture, for all its SF trappings, tonally closer to Assault on Precinct 13: urban horror. Death appears suddenly, from any doorway. Even from the floor. The Manhattanites are essentially faceless zombies, but ready to stab, shoot, maim, rape and murder. There is no hope (“The rules are simple: once you go in, you don’t come out”), and the only motivation is survival (everyone, even Cabbie, sees Snake as a ticket out).

Thus, there is no righting of this world – audience enjoyment comes from not worrying about the bigger picture, so it needs a protagonist you can get behind not getting behind any of it, on any side. Russell’s persuasive cynicism is enormous fun. His “Call me Snake” is exactly the kind of cool swagger he would send up as Jack Burton, and his eye patch and leather gear are designer-heightened (in the sequel, they’d tip into outright parody). Likewise, his legendary status is both underlined and mocked by “I heard you were dead” from everyone he meets (again, in the sequel, it would be entirely ridiculed).

When presented with his mission to rescue POTUS, he responds “The President of what?”, and his indifference to the fate of the world is punctuated by his final act of unspooling the President’s cassette tape containing the secrets of nuclear fusion; yes, of course it’s silly, but entirely appropriate to the line the picture is treading. Indeed, Carpenter’s treatment is so meta, he even has his Clint-a-like butting heads with Lee Van Cleef (his last role of note, although he’d continue acting for the rest of the decade).

Escape from New York is perhaps the perfect example of eclectic casting, though. Everyone feels right here, from old hands like Van Cleef and Borgnine, to Carpenter regulars (Russell, Pleasance, Atkins, Barbeau, narration from Jamie Lee Curtis – or is it Katherine Blanchard? –Frank Doubleday’s Romero coming on like Bernard Sumner in vampire drag, the inspired casting of Hayes).

And as with most of the director’s outings during this, his peak period, the script is structurally surefooted., meaning the picture itself is tight and economical. Snake doesn’t set foot in Manhattan until almost the half-hour mark, but from that point on, it’s a race against time: to deliver the President before the summit meeting; to get out of NY before the explosive charge ruptures his arteries; to navigate the various obstacles preventing this, including a fight against Ox Baker’s Slag and crossing the mined Queensboro Bridge.

Pretty much everything Escape from New York has going for it (not least DP Dean Cundey, whose Illinois visuals are tremendous and add millions of production value to the budget) is absent from the sequel, which is content to mimic and parody the original but without the spark and sharpness of Big Trouble inn Little China or (as merciless sequels go) Gremlins 2: The New Batch.

Carpenter said he wrote the screenplay in response to Watergate, but there’s little here that’s acute in terms of commentary; Escape from New York is all broad strokes, because that suits its content. One might argue that, for all the lawlessness and abandon, those in Manhattan are, relatively, free. They aren’t tagged and tracked everywhere they go. Admittedly, everywhere they go, their lives are in immediate danger, but inversely and perversely, they have greater autonomy than everyone subjected to the current plan for a totalitarian new world order. Perhaps they’ll corral those refusing Gates’ needle onto Manhattan Island. 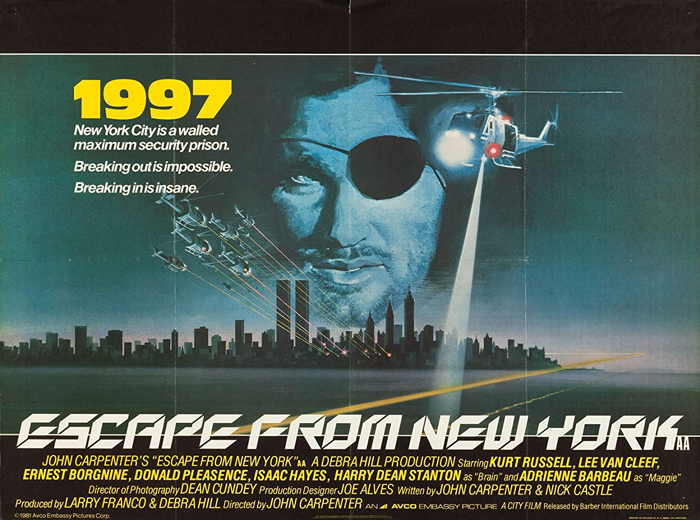