The crags on your face. Do they hurt?

There’s a lot of nostalgia out there for Logan’s Run. Unfortunately, most of it that isn’t focussing on the pulchritudinous presence of Jenny Agutter is unjustified. Logan’s Run’s problems are two-fold. It isn’t escapist enough to be a true crowd pleaser, and it isn’t brainy enough to rank in the top end of more respected SF fare of that immediate period (Planet of the Apes, Silent Running). Plus, it’s directed by Michael Anderson. Nevertheless, Logan’s Run occupies an interesting place for science-fiction movies, as the last of an era grappling with dystopian themes before Star Wars spawned a new visual language and mythic envelope that made such pontificating seem old-hat and antiquated overnight.

What Logan’s Run does have going for it, however, besides Jenny Agutter’s extraordinary costuming or lack thereof, is set up, courtesy of William F Nolan and George Clayton’s 1967 novel of the same name. There, the closed-system, post-apocalyptic remnants of humanity exist under rigidly regulated lifestyles in terms of belief and free thought but entirely liberal ones in terms of sexual freedom. Up until the age of twenty-one, that is, when they must die; this was extended to thirty for the movie, in order to accommodate an established lead actor. One wonders on the changes Bryan Singer’s thankfully aborted remake would have adopted. Perhaps he would have insisted on optimal ages reduced to fourteen.

Much of this scenario offers familiar elements in the form of second-hand Huxley-isms that complement the dystopian angle. The city is AI-controlled and the population are chipped (or its equivalent, via a life clock/palm flower crystal that signifies their age and thus remaining lifespan). There is no such thing as the family unit; the young are farmed in incubators. But the movie bears the scars of attempting a mix and match of ideas. The introductory text informs us that, by the twenty-third century, survivors of “war, overpopulation and pollution” (in that order?) are now living in a domed city, cut off from the outer world. Such vagueness is representative. In turn, the novel presents its own conceptual issues, positing youth run rampant, to the extent that by the 1990s, 82.4 percent are under twenty-one and by 2000, critical mass has been reached.

Where the picture capitalises on its inherent sketchiness is the idea of the reset of humanity. It’s something that has gained a degree of cachet of late with such theories as a “mudflood” occurring in the not so distant past (as in, hundreds of years, rather than millennia), or the adding of hundreds of years to the scoresheet such that, for example, the Dark Ages never existed. And under some accounts, neither did much of the medieval period (Pompeii’s destruction comes in around 1631). Such theories drill to a root paranoia that much of our learnt knowledge and unquestionable, established fact may simply be a script the powers that be – the victors, let us say – dictate to us, to be consumed by rote. Until the next reset (you know, the one that occurs through an unfortunate and unforeseen mass culling; just make sure the preponderance of survivors are the very young, ripe for indoctrination with a new legend).

There, those on their last day must visit a Sleepshop. Indeed, the moniker Sandman has much less resonance without the accompanying Sleepshop concept. The ceremony of the Carrousel brings with it the regalia of occult ritual, so might it have been more effective to promise a seamless transition to a higher plane, sending willing sheep into a booth or equivalent lightshow, such that anything messy occurring is out of sight, out of mind? As it is, the Carrousel visuals, cocaine disco by way of PT Barnum, with a sprinkling of Jason Voorhees, do little to convince that the fantasy of the renewal pill would really be that sweet.

The realisation of Logan’s world has that makeshift quality of much pre-Lucas SF of the period, a cheap-expensive lustre whereby, no matter how impressively vast the models are, they only ever look like models (partly down to the lighting, partly down to the flatness Anderson tended to inflict on his pictures). This was a relatively expensive movie, coming in only two or three million under Star Wars, but you’d be forgiven for assuming, with its reliance on shopping malls, sewers and other real locations, that it comes from the same opportunistic production ethos that gave us the barrel-scraping budgets of Dawn of the Dead or Blake’s 7. The knock-on of this patchwork effect is that it’s impossible to fully buy into the conceit, which means it’s no wonder that the first thing most fans go to is Agutter’s skimpies (even, in an example worthy of “100 Girls I’d like to Pork” from Danny De Vito’s Throw Momma from the Train, devoting a whole blog piece to its formative effect).

This is the kind of movie where the hero (Michael York’s Logan), despite being established as a “villain” while simultaneously as anodyne as Luke Skywalker, is asking questions from the start (“You know, Logan, you wonder a lot. Too much for a Sandman”). Meanwhile, the actual villain (Richard Jordan, enthusiastically sadistic as Logan’s best pal Francis), as headstrong and into self-gratification as he is, is surely more likely to object to having his life, and freedom, snatched away from him (the novel’s twist of Francis being a good guy and older than he seems is more inventive than anything done with the characters here).

Logan’s Run is also the kind of movie where the very careless AI drops clangers that feed the hero’s doubts (“You mean, nobody’s ever reached renewal?”). And to top it all, is defeated with a “Does not compute!” self-destructive climax, the last resort of an inspiration-free screenplay. Sure, you can argue entropy has entered the system, all systems, as evidenced by Box’s twisted angle on food storage (“It’s my job to freeze you”), but the last twenty minutes of the picture are pretty much a redundant slog. Logan returns to the city without any kind of plan and so gets very lucky when the computer doesn’t like what he has to tell. The interrogation is quite striking visually, with a then cutting-edge hologram effect, but that’s about the extent of it.

Indeed, the picture really begins to crumble after the encounter with Box and the exit of Logan and Jennifer into the outside world (whereby we see that the subtext of many a dystopian SF picture remains intact: humanity is a pox on the planet, and it would be a blessing in disguise to wipe out vast swathes in order to rehabilitate it).

Box (Roscoe Lee Browne) is the kind of half-baked concept design that appeared quite frequently before Lucas ushered in fully-devised and interconnected universes, and is thus the more interesting for its oddity. But the decision to dispense with an actual Sanctuary means the picture has no real lift in its last half; I’m not suggesting a Mars colony (per the book) would have been an answer, but Peter Ustinov in old age makeup doesn’t really cut it, not with his improv Southern accent and TS Eliot whimsy. I love Ustinov, but his performance here is the wrong side of indulgent. It adds nothing to picture’s mythic sense at the point where, for example, Planet of the Apes is unearthing human toys; he has no importance other than being old. And the guy from Topkapi.

I suppose one might argue that Ustinov’s presence allows the final scene to celebrate the elderly (rather than leaving them to rot in care homes), but any potential is squandered; the treatment tends to the mawkishly indulgent. Combined with the rather trite rediscovery of the concepts of husband and wife by Logan and Jessica, the movie rather collapses in upon itself. Of course, it doesn’t help that Anderson fails to inject much in the way of urgency and nothing in the way of style to the proceedings, either of which would have helped mask the screenplay’s inadequacies.

The various incarnations of the eternally in development hell remake promised to go back to the source material for inspiration, but the world of Logan’s Run really needs firm foundations from the first to give it legs. The themes of fabricated religion, indoctrination and pacification are the most interesting ones serviced by the picture – ones one might argue reflect current society in various respects, certainly as far as the putting down of “heretical” voices is concerned – but not enough time is spent establishing and realising them.

Doctor Who borrowed liberally from the concept in the first segment of 1986’s The Trial of a Time Lord, in which a hermetically sealed, post-apocalyptic underground society serviced by an AI/robot institutes regular culls to keep the young population stable. No orgies there, however. Indeed, like many ’70s pictures, it’s a wonder Logan’s Run managed to merit a PG rating (even the 12 raises eyebrows, not so much for what is shown as implied). Ultimately, the movie never feels sufficiently thought out to reach past the derivative and become comfortably its own thing. Probably its most serviceable aspect is its name. Yes, that must be why they want to remake it. 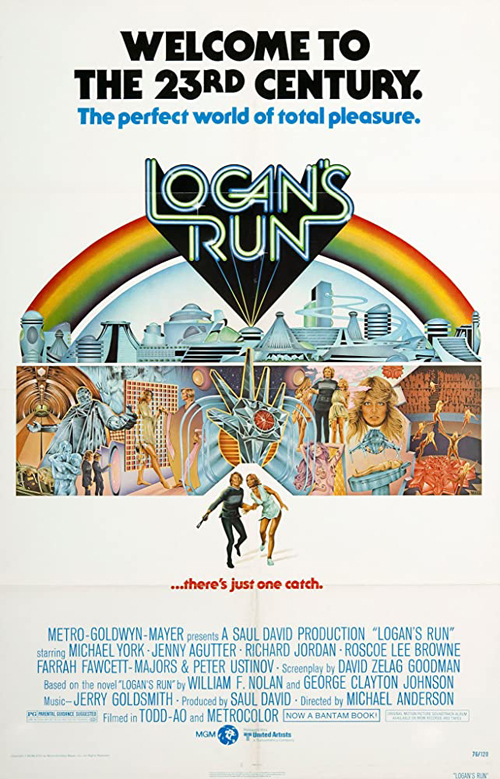