If we don’t stop this thing soon, the whole damn planet’s in trouble.

There’s an evergreen lure to the Philadelphia Experiment’s mythos, up there with the Bermuda Triangle for “fact-based” mysteries. A movie version would doubtless benefit from a more literal and “plausible” approach, as would many of the rumoured alt-science ventures of WWII. What we got was much more basic, but the premise itself goes a long way. So much so, it helped mask the movie’s relative averageness at the time of its release – at least, for someone who lapped up the possibility that it was based on an actual event. And we should probably grateful The Philadelphia Experiment is as serviceable as it is; after all, director Stewart Raffill closed out the decade with Paul Rudd’s star-making turn in Mac and Me.

The most engaging aspect of The Philadelphia Experiment is the chicken and egg of the time-travel plot, even if it isn’t entirely clear when it was hatched. Certainly, it wasn’t part of Charles Berlitz’s 1979 book The Philadelphia Experiment: Project Invisibility that made the story famous, despite the garbled account of Carlos Miguel Allende’s letters found on the Wiki page. The basic lore concerns an experiment at the Philadelphia Naval Shipyard in 1943 with the objective of rendering the USS Eldridge invisible; it duly vanishes and reappears in Norfolk Virginia before returning to Philadelphia. Some of the crew have disappeared, some have gone mad, and five are fused to ship itself.

By the time alleged former crew member Al Bielek surfaces in 1990, time travel has become integral to the “actual” tale. It should be unsurprising then, that as Bielek has it, the movie accurately portrays the basic outline of events. Presumably either through government leaks or osmosis. As told to Richard Scheib, screenwriter Michael Janover takes credit for introducing the time-travel element and finds its incorporation into the greater lore quite amusing (time distortion effects are referenced in Allende’s letters, but nothing of this order).

The bigger boost to the mythology subsequently resulted from connecting the Philadelphia Experiment to the equally speculative but even more uncanny Montauk Project. A rift in time between 1943 and 1983 connects the two programmes. Preston B Nichols and Peter Moon documented their interweaving in The Montauk Project: Experiments in Time, as well as a series of increasingly tenuous follow-up volumes offering slimmer and slimmer pickings.

The Montauk Project succeeded in becoming even more fertile ground for conspiracy lore than the Philadelphia Experiment, 99 percent of which was thrown out the window when Stranger Things (originally titled Montauk) transformed the premise into a kid-friendly, uber-palatable nostalgia fest. You know, rather than portraying the project’s allegedly reprehensible experiments on children.

As related by Moon and Nichols, Duncan Cameron Jr and his brother Edward attempted to turn off the equipment on the Eldridge but could not, because it connected through time to a generator at Montauk operating in 1983. Due to the unsafe electromagnetic field on the ship, they decided their best course of action would be jumping overboard; they fetched up in Montauk in August 1983 (approximately a year before the movie was released).

Similarly to the movie, the brothers then met an engineer from the original project, although their man was scientist John Von Neumann (who took over the project from, of course, Nikola Tesla). Having waited for them since 1943, Von Neumann explained there was a “lock up in hyperspace”. The two men were required to go back and shut the generator off. Again, this sequence of cause-and-effect is very similar to the movie, right down to one of them staying in 1943 and one returning to 1983, even if anything relating Montauk is entirely absent.

Plus, obviously, there are also no aliens. As that would be too silly. There’s even crazier material involving Duncan and the measures necessary to ensure his survival after he returned, but I’ll leave you to investigate that for yourself. As for Edward… for various whacky reasons, age-regression techniques were employed to put him into a body in the Bielek family. Thus, he became known as Al. Al, who grew up, worked on the Montauk Project and then began to get his memories back.

Their contributions to the legend have snowballed into something of a cottage industry. In tandem with which, rather lurid and unsavoury stories have attached themselves to several of those alleging involvement in these alleged events, none of which does their credibility (provide you were credulous in the first place) any favours.

A summary of the various foibles in accounts can be found here (albeit, don’t expect a complete debunk). It is suggested, “only a small group of people believe Bielek and nearly everyone thinks that his stories are based on some truth, but he’s exaggerating the truth for personal reasons. This popular opinion seems to be reinforced when Bielek starts remembering things only after having seen the movie ‘The Philadelphia Experiment’”. That’s a fairly thunderous alarm bell, along with doubt having been placed on the claim that he had “Little to no knowledge of it in the past”. Consequently, one might take the view that the director of Mannequin Two: Mannequin on the Move succeeded in inspiring an afterlife for this tale no one could have foreseen at the time of The Philadelphia Experiment’s release.

Bielek may not be alone in citing the movie version as purported fact. John Carpenter, credited as executive producer despite his ultimate lack of involvement in the production, sounds as if he is misremembering the time-travel part when discussing his involvement: “I was working on the screenplay for The Philadelphia Experiment, which was one of these urban legend-type stories about a destroyer in World War II that supposedly time travelled and went into a weird warp. It had a great first two acts but no ending, no third act; it was a shaggy dog story that didn’t end. So I struggled with it, but I couldn’t fix it”. (In another interview he called it “Absolute bullshit, but what a great story” and of the third act “A friend suggested the revenge of the crew against the people who put them there, but I thought it was too much like The Fog”).

Joe Dante also had a crack at it: “I was also involved with John at the time on a script he was working on which eventually became The Philadelphia Experiment. He was writing it for Avco Embassy but he only got about 25 pages in when the company started passing it around and offering it to other writers. I started working on the script for that and another for them called Meltdown, which was about an atomic power plant, but then Avco Embassy went under and it was sold to Norman Lear and he decided that he didn’t want to make those kinds of movies so The Philadelphia Experiment ended up being made at New World Pictures”. Dante’s final contribution is unclear, but it has been suggested Wallace C Bennett (who gets a story credit) rewrote it; Raffill, despite professing to an extensive rewrite, has no screenplay credit.

As you might expect from New World, The Philadelphia Experiment doesn’t exactly boast lavish spectacle and a sumptuous budget, but Raffill, aided by cinematographer Dick Bush (various Hammers and Ken Russells as well as Phase IV) ensures the picture doesn’t overstretch itself. The experiment (side-) effects, utilising negative images, get the idea of a breach in dimensions across effectively, while the time tunnel realisation of hyperspace does everything it needs to.

The main narrative begins once David (Michael Paré, somewhere between Sly Stallone and Joey Tribiani) and Jim (Bobby DiCico) leap overboard from the Eldridge and arrive in 1983. There, Dr Longstreet (Eric Christmas) is rendering a deserted desert town invisible, and in so doing has created an unstable link between the time periods (“We opened up a hole, Barney. We opened it up, and it stayed open”). David and Jim engage in some pretty basic culture-clash antics, with a wasted Nancy Allen in tow and Jim suffering the worst fallout from their experience. Before long David, having eluded the military, opts to confront Longstreet, and from there it’s a short hop to persuading the sailor to go back and shut down the generator. There are solid bones for a climax there, but they needed finessing and greater intrigue.

If the premise is the star, it isn’t done any favours by bland leads. Despite attempts to prove himself otherwise, Paré was never able to break out from being something of a B-list, more photogenic Stallone. Christmas is good value, though, as is Stephen Tobolowsky in a very early role. Best of the bunch is probably Louis Latham as the older Pamela, emoting with a degree of depth and sincerity on meeting David again that suggests a more resonant take on the material.

One might testify to Raffill getting the drop on the following year’s Back to the Future with the “Reagan is President?” gags, but I’m sure they were percolating in similar form in a variety of places prior to this. It’s so long since I last saw the movie, I caught myself wondering if they dispensed with the memorably grisly sight of sailors fused to the bulkheads, and that the Berlitz book was the first time I’d encountered it. But no, they are there, saved for last.

The Philadelphia Experiment might have laid a claim as ideal fare for a big-budget remake, one that takes or leaves the Montauk side as it deems necessary (taking it would inevitably give rise to controversy, what with the muddied reps of those claiming involvement). That is, if the material didn’t already seem to have been over-plundered at this point, with both a 1993 sequel and a SyFy version in 2012. Perhaps it is best preserved where it is, as part of the early-80s glut of genre fare, hanging on by a slender thread to ’70s imaginings of less tangible and more mysterious, occult versions of history. 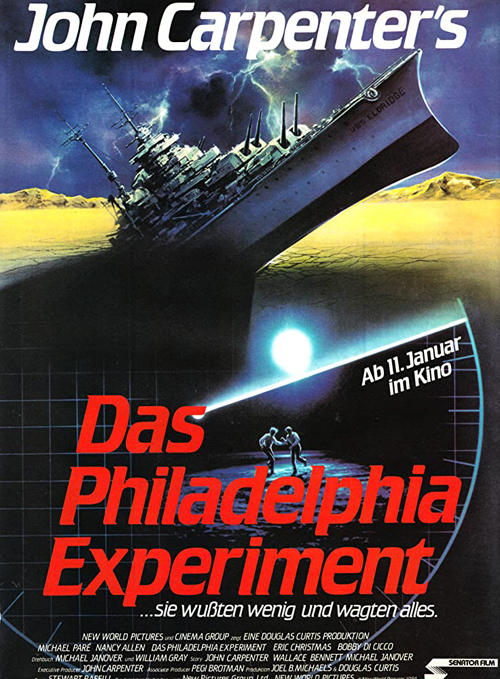