We’re the last trustees of civilisation when everything else has failed.

Turgid, lifeless and inert. That’s the future for you. Apparently, HG Wells’ influence over the production of Things to Come has been overstated, although it seems he did manage to ensure the magnificent Ernest Thesiger was replaced by Cedric Hardwicke; more’s the pity for any hopes the picture had of any spark of wit or humour. Whether or not Wells was kept at arm’s length, Things to Come carries intact a wearying surfeit of pompous speechifying and dry staging. Yes, there’s impressive spectacle here – some of it still impressive – but there’s nary a nudge of narrative tension. What there is, is an abundantly alarming approval of benevolent dictatorship, one that opportunistically reaps the benefits of the twin scourges of war and disease. That, and an unswerving faith in the triumph of scientific materialism as equated with progress.

These elements are sketched in broad strokes, more rudimentary and less detailed than in the writer’s 1933 tract The Shape of Things to Come; Wells wanted to direct his adaptation too, but common sense, or a degree of it, won out. Art director William Cameron Menzies took the reins instead, but directing was never his strongest suit. The refuge of the apologist is to profess that Things to Come was impressive at the time and still deserves respect on that basis. However, it didn’t exactly wow audiences then, barely scraping into the year’s Top Twenty films in Britain.

And today, it stands as, at best, a curio. No one touts the source material’s prescience the way they do Wells’ fellow eugenicist and inside man Aldous Huxley’s Brave New World of a few years’ earlier, or the film’s resonance in the manner of Fritz Lang’s Metropolis, of which Wells was highly critical (“quite the silliest film” as quoted by Time Out critic Chris Wicking). Indeed, it’s easy to believe the assertion that any window of relevance the picture held had vanished by the time the war it did manage to predict took place – or was it an early instance of predictive programming? – since it only went to emphasise all the things it failed to get remotely right: everything else. Albeit, I think such accuracy is actually neither here nor there – 2001: A Space Odyssey didn’t fall through the cracks because it failed to reflect where we were at. Rather, Things to Come falters because it offers nothing else besides its slightly facile predictions. Crucially, interesting characterisations and dramatic scenarios are starkly absent.

Perhaps unsurprisingly, the written original’s anti-religious scouring is soft pedalled, so as to avoid ruffling audiences’ feathers. And there’s no mention of English – naturally – becoming the standard language for all. Wells’ “Wings Across the World” New World Order arises from the ashes of a thirty-year war beginning in 1940, and about the closest the film comes to explicit religious referencing is an opening that desecrates the cosy nostalgia of Crimbo, with its “World on the Brink of War” headlines heralding the dropping bombs. “If we don’t end war, war will end us” warns Raymond Massey’s heroic visionary John Cabal, almost Randian in his quest and just as rigid, the occasional snappy soundbite aside. I suppose one might charitably suggest Wells’ thirty years of combat takes in WWII, Korea and Vietnam, but something is seriously askew if things are envisaged to start coming together in the 1970s.

There’s little in the way of punch to the depiction of the societal degeneration that leads to rise of feudal warlords as personified by Ralph Richardson Richardson’s Rudolf, aka the Boss. Richardson was apparently aping Mussolini, but a natty sheepskin aside, he’s a bit of a bore (the actor’s just too refined for the part, and can’t disguise it). I think I even prefer the stolid Massey.

Before we’re introduced to the Boss, though, we’ve seen Cabal unconvincingly soliloquising over shooting down the enemy (“Why does it have to come to this? God, why do we have to murder each other?“) and the rolling by of the years (1945, 1955, 1960). Then there’s the announcement of a biowarfare agent, personified by the Wandering Sickness; it’s a “fever of mind and body” – don’t drink the water – that leaves its victims as less flesh-prone zombies. Presumably, it’s contagious – Wells is fully pasteurised – as those with it are swiftly shot. That, and it’s likened to Black Death in the Middle Ages (“It killed more than half the human race”).

John, meanwhile has disappeared, forming his own, er, cabal of like minds. He re-emerges with a shock of white hair, clad symbolically in black – he’s a grim reaper announcing the end of life as the proles know it – and sporting a pre-Prometheus space helmet. Cabal has no sooner landed his aircraft – planes are a BIG deal in this future, bafflingly – than he instantly begins dictating terms, despite being held at gun point. Which would be impressive if his presumption wasn’t so obnoxious.

With such queasy phrasing as “the brotherhood of efficiency, the freemasonry of science” he decrees that war “has to vanish. Like the tyrannosaurus and the sabre-toothed tiger”. As such, anyone planning to act under their own recognisees can jolly well forget it: “Our new order has an objection to private planes” he informs the Boss. And, just to make it crystal clear, “We don’t approve of sovereign states”.

Like all those bent on realising their big idea, John is chillingly pragmatic, accusing the Boss of being a traitor to civilisation and showing no emotion when he winds up dead. For their own good, to save them from themselves, everyone else has been gassed into unconsciousness – that’s all, allegedly, although things didn’t turn out very well for the Boss, now did they? – doubtless to awake chipped and vaccinated in a gleaming white future that doesn’t so much beckon as strongarm its way into existence: “Now for the rule of the airmen and a new life for mankind”. Certainly, the way things have unfolded, there’s scant need for a massive cull to arrive at a manageably-sized population for Cabal’s future vision. Events couldn’t have worked out better if they had followed the Georgia Guidestones.

In its own rather feeble way, this middle section at least offers some parrying of ideas, as undernourished as they are. The final 2036 sequence is the one that delivers on all the utopian dreams, which means it’s unsurprisingly dull. Well, it would have to be. They got rid of Thesiger, didn’t they? Theotocopulos, Hardwicke’s character, is a dissatisfied sculptor who doesn’t believe things have really got any better, despite all the white surfaces and the living longer. Hence his suggestion “Suppose someone shouted to the world ‘Make an end to this progress!’?”

As political tracts go, it isn’t exactly nuanced. His stance lacks even the allure of Luddism. It’s just someone being reactionary because his art isn’t all that. In fairness, while it would have been nice if there had been a little more substance to his position, it’s about as deep as the idea that there won’t be any war again, “Not if progress goes on”. Which is tantamount to Alec Baldwin’s “Always be closing” mantra in Glengarry Glenn Ross.

Besides, who could fail to see the allure of this future? There are widescreen TVs, disease is banished, and good diet is a requisite (“Colds we had, and indigestion too”). Plus, Roman togas are back in. Micro togas. No more pesky windows either (“The age of windows lasted four centuries” – which can’t be a Bill Gates reference; Windows only seems like it has lasted four centuries). There’s also the prospect of reaching the Moon via a giant space gun, so some things will be just as out of reach as they are now, come 2036 (“Why do you let your daughter dream of going on this mad Moon mission?”). And, just as now, Wells presents no choice with regards to embracing the technocratic future: “All the universe or nothing. Which shall it be?” We’ll all be glorious communitarians together.

Apparently, Terry-Thomas is somewhere there in 2036, but I didn’t spot him. Edward Chapman, fresh from Hitchcock and prior to hounding John Gielgud, is visible too, edging closer to his Mr Grimsdale in stoutness and persona (several of the players appears as several generations of their family lines).

Like Huxley, Wells was a member of the Fabian Society, and it might be argued Things to Come was his Agenda 36, having laid the groundwork in his Tavistock Institute-influencing Open Conspiracy. Certainly, he wasn’t being fanciful when it came to NWOs. Wells is said to have fallen out with Lenin because the former favoured the Elite families creating the very such global behemoth through business and technology, rather like Cabal bringing salvation through “order and trade” (instead, it will be the caring, sharing World Health Organisation, brought to you by Windows).

On a surface, aesthetic level, there isn’t much in Things to Come to connect Wells’ “utopia” to today, but the themes of conformity and rigid elite control of a powerlessly complicit populace are evident even here; you’ll be free to do as you wish, as long as it allies itself with the ordained message. And as long as you haven’t been gassed by that point. It is curious that Wells the artist casts as an artist as the villain of the future, threatening all that noble achievement. But then, he’d long since stopped delivering creative inspiration by the time he wrote The Shape of Things to Come. How else do you explain a line like “To the Space Gun!“? 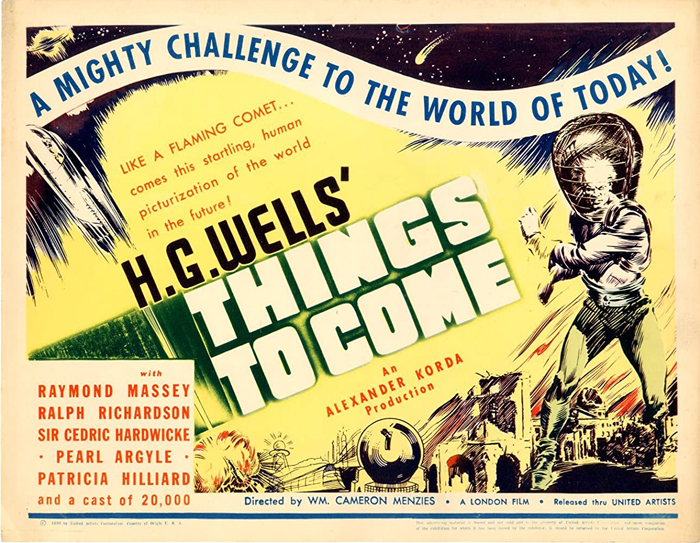 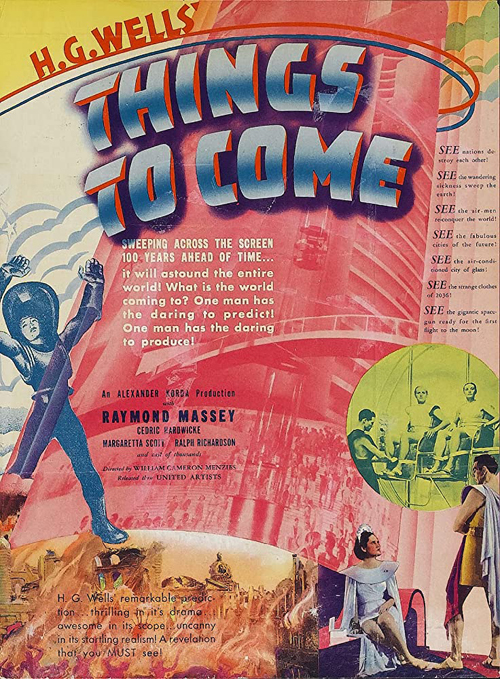 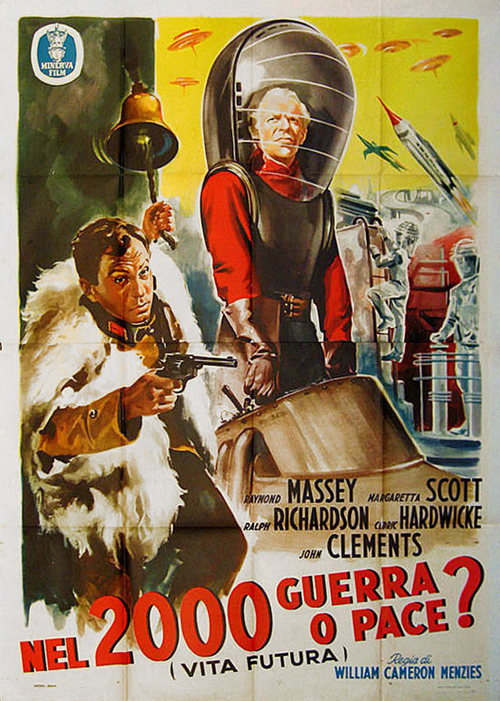