You’re a regular little CIA all on your own, aren’t you?

I underrated Ken Hughes’ sharp little spy thriller last time I saw it; probably, the quality of the battered, pan-and-scanned print didn’t help any. In pristine form, The Internecine Project – I think it’s a great title, in contrast to Glenn Erickson’s appraisal – reveals itself as commendably oddball and unlikely, but also a politically shrewd picture, if in a manner that is anything but heavy-handed. Plus, it has James Coburn, being magnificently James Coburn about everything.

Coburn’s Robert Elliot is ostensibly the bad guy, yet in the best Hitchcock fashion, the tension of the piece derives from our wanting that bad guy to succeed in his nefarious scheme. Particularly so as, logistically, he’s entirely unlikely to do so. Elliot is referenced as a former secret agent by various sources, including the Wiki synopsis, but I’m not sure this is explicitly stated in the movie itself. Certainly, he’s up to his neck in shady business, but on the surface he’s a legitimate and respected professor, author, lawyer, senior lecturer on economic studies at Harvard University and Special Advisor on Financial Affairs to the United States Senate Foreign Relations Committee.

He just also happens to run a European industrial espionage network and knows everything about everyone, it seems, including Keenan Wynn’s EJ Farnsworth, who brings him the offer of becoming Chairman of the President’s Economic Advisory Committee. Admittedly, this would lend credence to the former secret agent angle. That and his almost complete lack of hesitation when Farnsworth informs him he will have to get rid of any loose ends in order to accede to the position. Those leads being the four associates in his network, and the plan Elliot devises to get rid of them being titled “Internecine”.

This is an ingenious, if reliant on torturously precise timing, scheme for each to bump the other off, on the basis that the chosen individual in the network has become unreliable, leaving no trace remaining to Elliot. There’s Ian Hendry’s Foreign Office civil servant Alex Hellman, Michael Jayston’s research scientist David Baker, Christiane Kruger’s high class call girl Christina Larsson (one of whose clients is Bergerac’s Charlie Hungerford, Terence Alexander) and Harry Andrews’ masseur Bert.

Each must call Elliot at appointed times on the night in question – calls he is not scheduled to answer, and from public call boxes, no less – in order to assure they are keeping their schedule, and again when they have completed their part. Hendry’s required to bludgeon Andrews, Jayston’s due to give Hendry an overdose of insulin, Kruger to kill Jayston with his own sonic weapon and Andrews to strangle Kruger. Wynn’s objection “I don’t know, four murders in one night. Doesn’t seem a very reasonable way to approach this thing, I mean” at least puts that up front.

One of the great pleasures of the picture is how well cast it is. Hendry and Andrews stand out in particular. As soon as we see the former, sweaty and nervous at the prospect of getting his hands dirty, we know he spells trouble (making Elliot’s decision to give him such rough work the more surprising). It’s another great Hendry role, whose days of heroic leads were long since behind him at this point, but he was proving a remarkably reliable character actor, whatever his problems with alcohol (see also The Hill and Get Carter).

Andrews needs no persuasion to do his deed, revealing a psychotic misogyny (“Yes, women. They’re all the same… They’re unclean, sir. Unclean… I hate them. I hate them… They’re all whores, sir!”); the picture becomes a slasher for this vignette, perhaps pointing the way to Hughes’ final credit Night School. Jayston’s demise is perhaps the biggest stretch (since Elliot presumably didn’t know for sure he’d be using that method until Jayston delivered it to him).

There are various impingements on a smooth-running process, including Elliot’s unwise dalliance with Lee Grant’s journo Jean Robertson, who is doing a story on him (he even allows her into his house during the crucial night). Hughes throws in red herrings that come to nought: her suspicion over his phone call is only about thinking he is seeing someone else; Jayston is seen leaving Hendry’s floor; Hendry leaves a footprint at the scene of Andrews’ demise.

The big surprise is that Elliot pulls his conceit off, relatively hitch free; no police come to his door, and Grant doesn’t expose him. I half wondered if it might be revealed that Wynn had been getting him to do dirty work so he could be bumped off in turn, but in the end, Elliot succumbs to a poisoned notebook posted by the suspicious Jayston (himself quite capable of self-deception, protesting his work is “creative, not destructive” and that the device he created for Elliot is a deterrent only).

It’s a satisfying, concise turnaround (the picture runs to less than ninety minutes, with the first forty taken up by Elliot positioning his pawns). Hughes, a genre gadfly who, in the previous decade, had made family musical Chitty Chitty Bang Bang, historical epic Cromwell and was one of the six directors who worked on Casino Royale, delivers tone-perfect staging for the thriller genre; every shot in this Geoffrey Unsworth (2001: A Space Odyssey) lensed picture is lean, taut, precise, and perfectly complemented by Roy Budd’s percussive score.

In his review for Time Out, Chris Petit observed “the film gains weight thanks to its topical implications”, adding that it “offers more food for thought than most such unashamedly commercial movies”. I’d agree with that. The picture opens with Elliot as a guest on The World This Week (presented by Julian Glover), offering justifications for unchecked inflation (not a problem today) and the free market, and for overthrowing regimes in developing countries at the behest of US corporations; it’s quite clear whom he believes is in charge – it isn’t the US President, but rather Wynn, the VP of International Oil, Acting Attorney for the EDC, Transmutual Copper, AG Industries Inc, and Chief Advisor to the Central Committee of US Foreign Economic Relations, amongst a long list of other appointments, who offers him his job.

Underlining this, Wynn may need to improve his golf game but he is clear that “You know, power’s no damn good unless it comes from the top”; Elliot spells it out for Jean in parting, when she accuses him of taking the stance that the ends justify the means; he protests that he has ideals he believes in very deeply, and that his appointment, bypassing political process to gain influence is warranted because of it: “Yes, the whole world’s run by a bunch of democratically elected amateurs” he tells her. When she protests “There’s a lot us poor downtrodden peasants who don’t happen to agree with you” he responds “That’s why you’re peasants”. It’s the entitled attitude of the one percent.

Elliot even has his swipe at the fragile notion of truth (as well as, more mildly than Andrews, the women’s movement; crusading lady journalists drive him up the wall) He scoffs at the very illusion of her profession, or that such a tenuous idea can be connected with in a meaningful manner: “For five thousand years, men and women all over the world have been trying to discover what the truth is. You’re telling me your paper prints it?”

Coburn is pure class throughout, of course. Ruthless, charming, effortlessly commanding the screen. His character is entirely confident when presiding over his small sphere, but he isn’t unassailable. Wynn can pierce his armour, when he affirms “I wouldn’t even think about it” in response to Elliot wondering aloud if he would kill him if he stood in his way. And while he appears implacable, such that Grant’s conscience-troubling role (“You used to be such a nice guy”) appears for nought, when he does have to get near to the messy business of death, upon visiting the expiring Hendry, his façade breaks ever so slightly. It isn’t so easy, up close.

Purportedly, the picture was more politically skewed in the first instance, but I’d say it gets the balance about right, without belabouring its point. The script is credited to producer Barry Levinson and Jonathan Lynn (his first movie, though he claims little of his script was used) from Mort W Elkind’s novel Internecine. Apparently, Coburn didn’t think his character should die; not for vanity, presumably, as he did little else in movies around that point. Rather because, in real life, such a character would get away with it, rather than succumb to very movie justice at the last moment. If that was it, he has a point, but The Internecine Project is, nevertheless, a cut above and stands as a fine example of the ’70s paranoia thriller. 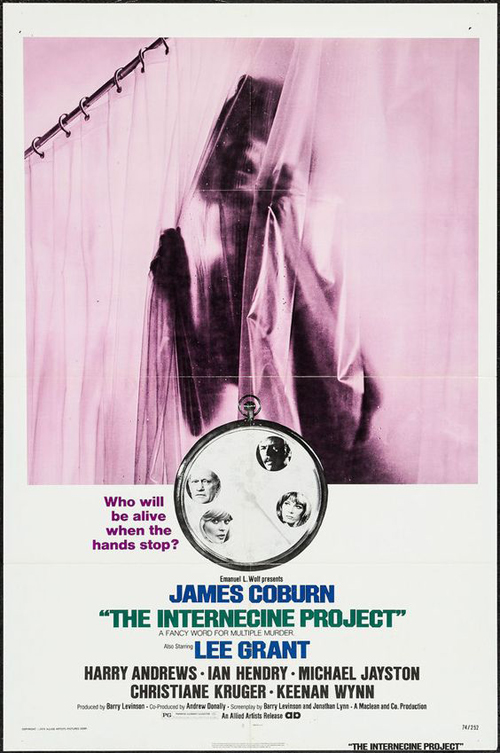