I know, I know, we are the chosen people. But once in a while, can’t You choose someone else?

When I say the appeal of Fiddler on the Roof is all about Topol’s performance, that’s not to suggest I might not have similarly rated Zero Mostel, had I first seen him as Tevye (although I’m guessing that’s unlikely). And it’s not a slight on Joseph Stein’s adaptation of his stage play, or the clutch of great songs peppering the picture, or Norman Jewison’s unobtrusive direction and Oswald Morris’ fine earthy cinematography. But Topol makes the film, in the same way F Murray Abraham is the pulse of Amadeus.

I guess I mention Abraham because both are a case of an actor singularly identified with one role, regardless of whatever else they may have done since. And both were nominated for Best Actor Oscar for that role. Abraham, of course, won, while Gene Hackman’s Popeye Doyle in The French Connection beat Topol (other nominees were Peter Finch, Walter Matthau and George C Scott). Further, the success of William Friedkin’s film at the awards – even though Fiddler on the Roof was the year’s biggest box-office hit – reflected the changing Hollywood landscape at that point. A few years earlier, Fiddler would surely have swept the board (a few years earlier, Oliver! pretty much did). Now, it had to make do with Best Score, Best Sound and Best Cinematography (it was nominated for eight, along with The French Connection and The Last Picture Show).

Fiddler on the Roof was up against solid competition, though. Even now, four of the Best Picture nominees stand the test of time; Nicholas and Alexandra was the expensive period bomb whose devoted publicity campaign managed to win it an undeserved nomination. The French Connection and A Clockwork Orange remain most indelible, and I’d suggest The Last Picture Show might have lost some of its lustre, but Fiddler on the Roof still stands as one of the great Hollywood musicals. And that’s despite having maybe only four standout numbers (If I Were a Rich Man, Miracle of Miracles, Matchmaker, Matchmaker and Tradition).

And Topol, then thirty-five but playing twenty years older, is so effortless in his intimacy with the viewer, it’s no chore to spend three hours with him. His misapplication of scripture, attempts to maintain his patriarchal authority and little chats with God are warm and witty, as are his asides of contemplation as he ponders the ins and outs of each new attack on his preserved values; one of Jewison’s few directorial flourishes is to give Topol the close up, the subject of his thoughts suddenly set in the far distance.

The intermission is notably placed at the musical’s downturn in tone, from feisty and upbeat to tragic displacement, as the pogroms turn out Tevye and his village. Jewison resists the urge to over sentimentalise this, though, and the dark wit that has laced the picture throughout is still in abundance (“Maybe that’s why we always wear our hats” ponders Tevye of their moving on). Fiddler on the Roof’s great skill is treading a line between thoughtfulness and the frivolity of the musical form.

There are elements that are perhaps less than essential; the “dream” sequence never really takes flight, and while the Do You Love Me? track, as Tevye and Golde (Norma Crane) recognise that, despite their arranged relationship, they do love each other, is rather sweet, there’s a prevailing feeling that Golde is given insufficient time to underline their relationship.

But elsewhere, there are some very nice performances, not least Paul Mann as the wonderfully named Lazar Wolf (the butcher), who fails to forgive Tevye for reneging on the agreement to marry his eldest (and whom Tevye initially thinks he is talking to about selling a cow). Zvee Scooler plays the Rabbi – he’d pop up in Love and Death a couple of years later – Paul Michael Glaser is the Bolshevik suitor of Tevye’s second daughter Hodel (Michaele Marsh) and Tutte Lemkow, Old Gorky in The Avengers’ Legacy of Death, is the title character.

Fiddler on the Roof stands as one of the last gasps of the traditional Hollywood musical, thanks in part to a glut of ill-conceived bombs in the wake of the all-time-champ The Sound of Music. Unlike many, though, it concludes on a bitter-sweet note of perseverance in the face of an uncertain future. As such, it isn’t perhaps the anomaly it might at first appear when compared against the new Hollywood fare surrounding it. And Topol’s dancing is mighty. 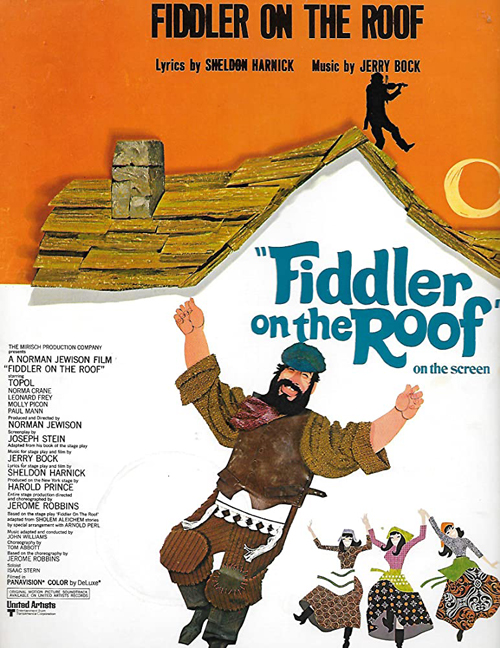