God and the Serpent have joined hands, and we are all kicked out of Eden.

The received wisdom on this more obscure Michael Caine film is pretty much “unusual setting but dull”. I didn’t find The Last Valley so. Dull that is. But then, I didn’t think the highlight was Caine’s studious German accent (per biographer Christopher Bray in A Class Act), which sounds to me exactly what you’d expect of Sir Michael attempting a German accent.

Not that Caine isn’t very good in the role of pragmatic mercenary the Captain (he demurs from giving any other name). Indeed, he rather steals the show from co-star Omar Sharif. And Pauline Kael was probably onto something when she observed of his choice of modulation “it gives Caine a style in which to play the role… and I suspect the role wouldn’t work at all without it”. Sharif’s a teacher with an eye to preserving life – principally his own – during the Thirty Years War, no easy task until he stumbles across a pristine valley untouched by famine, plague, strife and slaughter. Hotly pursued by the Captain and his men, he brokers a fragile peace for the winter between the Captain and calculating village patriarch Gruber (Nigel Davenport), although navigating the demands of Catholic priest Father Sebastian (Per Oscarsson) proves more taxing.

In part, the choice of setting that makes The Last Valley a fascinating anomaly. James Clavell evidently thought so too. Now best known for Shogun, he had furnished screenplays for The Fly, The Great Escape and To Sir, with Love, as well as helming the latter, at the time he directed and adapted JB Pick’s 1959 novel of the same name, which would turn out to be his last feature.

The 1618-48 conflict isn’t exactly routine inspiration for books and films (The Wiki entry on the war only comes up with Queen Christina besides The Last Valley). Clavell’s film opts out of devoting swathes of exposition to bringing us up to speed on the sprawling conflict (I’m not even sure we’re given a date – the novel is set in 1637-8, and I’ve seen it suggested this 1643-4); mostly, it’s enough to know the basic, of Catholic against Protestant states, of mercenaries marching the land, and of no respite for anyone.

One might also view that as a missed opportunity, given the progressions and regional reaches of the conflict (from straightforward Protestant vs Catholic to France-Habsburg rivalry), but it would be easy for the film to have become enmired in unwieldy and stodgy history lessons (as it is, Cavell tends to overt commentary in spite of attempts to ground the picture in the mores of the period).

The beats of the positions held in The Last Valley are very familiar, in terms of cynicism of stated, or state, motives, the suffering of the people in that regard, the manipulations and control of the religious apparatus, and the methods for holding sway. Kael commented that it wasn’t clear if Clavell was suggesting the valley as a commentary on Vietnam (incursions by a foreign power) or Switzerland (a haven from strife), but with the benefit of fifty years hindsight, the material very much fits into a general lament for the state of humanity (“You are on borrowed time now, judge. So is the village. It’s all doomed”). Anything suggesting an idyllic state must, by its nature, be a mirage: “This valley is so peaceful. It would be so easy to become possessed by it”. At the conclusion, it appears that Vogel has saved the village, and if the Captain suggests he was right, in a larger sense, the takeaway is that the Captain’s doom saying was.

Clavell attempts to cover repercussions of the War, including references to cannibalism and witch-hunting persecutions, although he curiously makes Erika (Florinda Bolkan) an actual witch, prone to voodoo and offering a pact with Satan (“Protect him and I will worship you forever”), meaning the irrational hysteria part is somewhat dampened.

Vogel’s both idealistic and shrewd – neither a soldier nor a peasant, he persuades the Captain that he can be very helpful – but under Sharif, the character never really develops a spine or sufficient substance to make him feel motivated; it’s no coincidence that he starts and ends the picture on the run and alone, however much it may seem like a moral choice. Indeed, he ends up seeming a weak man without the courage of his philosophy when he stands by and lets the Captain’s woman (Gruber’s former woman) Erika be tortured (he does deign to stab her rather than witness her burnt at the stake, however).

His attempt to save the Captain from an ambush seems more out of acknowledgement of the former’s alpha-dom than doing what is right (there’s only ever a cool respect between the two of them). The Captain’s reasoned nihilism carries with it a certain code of honour, despite his capacity for violence and ruthlessness (dictating that the villagers provide women for his men, he suggests the priest sells them his holy indulgence, total remission for past and future sins, which Gruber could pay for). In contrast, it’s difficult to empathise with Vogel when his response is to run.

His urging of Inge (Madeleine Hinde) to stay in the village (he earlier saved her from rape) may seem noble, but in a sense, his departure is as unmotivated as the Captain’s decision to take part in the military campaign that does for him; it’s what he does, his fate. The Captain riding back to the village to die, mortally wounded, never struck me as the most plausible (it is also part of the novel, though).

We invite the Captain’s excoriation of the priest’s motives, but the adverse aspect is its underlining what a very modern character he is, able to perceive the world in a manner none of the proles or priests can; he is, effectively a man of pragmatism, almost of science, one who doesn’t believe in God, or witchcraft, and his cynicism seen to be justified in the face of a thoroughly invidious church rep (who has informed the villagers of their prostituted womenfolk that “Their suffering will save the village just as Christ’s suffering saved the world”).

The Captain attests “There is no hell, because there is no God. Don’t you understand? It’s a legend!” At one point, the Captain and Vogel discuss witchcraft, and the latter relates how his six-year-old sister was legally tried and burned for the crime; Vogel proceeds in an attempt to find the purpose of tens of thousands murdered in the name of God. The Captain replies “You are so naïve. You want to look under the plate they put the food on. Nothing is hidden”.

Gray, in an attempt to inflate Caine as the only worthwhile part of the picture, suggested it was “shot like a big-budget Hammer horror” (which would be to suggest any rural period flick was) and that “the camera enjoys the depiction of violence rather too much for the movie’s anti-war message to be taken wholly seriously”. The latter point is fairly baffling, since the violence in The Last Valley, implied or depicted, is only ever queasy and disturbing, rather than rousing. Likewise, I saw little in the way of “mwah-ha-ha-ing caricaturists” surrounding Caine. Not Sharif and Davenport and not Oscarsson (who is inevitably an extremist, but that’s in the writing rather than a moustache-twirling performance; he’s more possessed with zeal than anything).

You could argue that many of the parts lack sufficient meat on their bones, certainly, but that’s probably true of any given picture. Michael Gothard (who would appear in The Valley (Obscure by Clouds) the following year) is the thoroughly hissable Hansen, out to take power from the Captain, but if he lacks texture, he’s memorable. Brian Blessed gets a knife to the gut from the Captain early on, as the main threat to his authority. Ian Hogg and John Hallam are also notable as mercenary types, and there are roles for Frazer Hines, Vladek Sheybal and George Innes.

Kael suggested The Last Valley “isn’t a work of art, but it’s not really a bad movie either”. I think that’s fair. I also share her concern that the swooning John Barry score maybe isn’t the most appropriate – it lends the film a romanticism that isn’t quite right. But… I differ with her in that I think it is a great piece of music. I’d also suggest the film becomes a more interesting one with hindsight. It might have ended up undifferentiated with any number of historical war pieces of the era – in tandem with Caine’s workhorse ethic – but it feels more distinctive (and purposeful) now. Caine opined “I knew the day it finished it was not going to work”, but to call it a failure would be overly harsh. He made enough of those during the subsequent two decades; by comparison, The Last Valley is nothing less than intriguing, valiant and respectable. 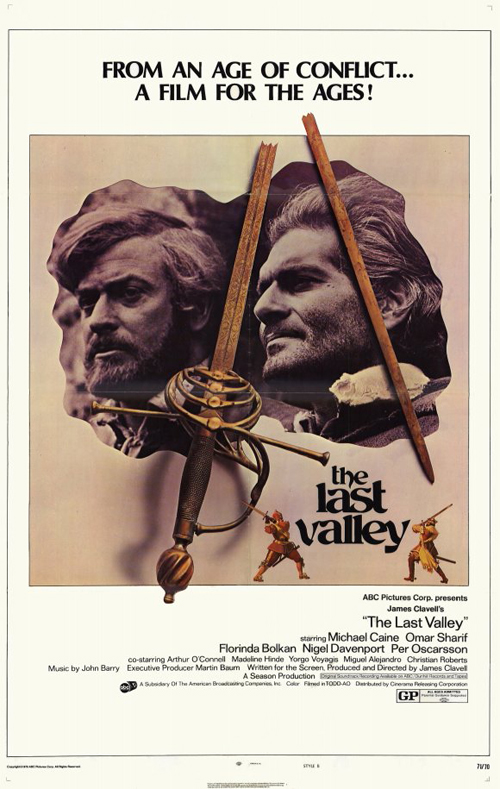