What the hell am I doing, watching Seth Rogen movies? This is the second one in two months, and I was I sure I’d sworn off the boorish oaf. Presumably, I’m not alone, since Long Shot may have been largely well reviewed, but it also flopped. Could it be that moviegoers just don’t see Rogen as a romantic lead? Even – or especially – in a gender-reversed ugly-duckling role? At one point, referring to Charlize Theron’s Secretary of State and presidential hopeful’s thing with his stoner schlub (he’s stretching himself there) journalist-cum-speechwriter, June Diane Raphael’s staffer tells him “The public will never accept the two of you together”. It should have been on the poster. As it is, it’s simply Long Shot’s epitaph. Feel something different? Only if being a little sick in my mouth qualifies.

Rogen’s Fred Flarsky – his surname was the original title, which is at least less anonymous than what we got – even gets a makeover at one point, which entails making his pubic beard slightly less all-encompassing and reduxing him in a tux. Theron’s Charlotte Field tells him how pretty he looks, which even Theron isn’t a good enough thesp to make convincing. The picture keeps running Roxette’s It Must Have Been Love as an affectionate call back to Pretty Woman, but that fantasy fairy tale looks wholly believable placed alongside Long Shot. Rogen and Theron have easy chemistry as pals, but that doesn’t make them remotely plausible romantically.

And that’s down to Rogen, not just down to Rogen’s appearance. He’s doing exactly the same act he does in every movie, and romantic sincerity just isn’t in his repertoire. What is, is the usual bag of Rogen stoner tricks, this time showing us how the world can be saved through slobbing out and getting wasted, as long as you have sound basic ethics. Along with a vague embrace of inclusivity and listening to all points of view, as when best pal O’Shea Jackson Jr reveals himself to be a God-fearing Republican; Jackson is somehow playing Rogen’s contemporary despite being almost a decade younger, while Rogen is playing older – early forties, most likely, since it is noted that the three-years-older Charlotte used to babysit him (“Wow, time has not been kind”).

The screenplay is credited to Dan Sterling (The Interview) and Liz Hannah, but it has Rogen and producer partner Evan Goldberg’s fingerprints all over it. Rogen could have stepped straight out of The Night Before and into this one (with which Long Shot shares director Jonathan Levine and a penchant for celeb cameos, this time Boyz II Men). We open with Jewish gags (he’s undercover with neo-Nazis and has to get a swastika tattoo), followed by his glorified drug habit (he takes ecstasy with the Secretary of State, leading to an amusing scene where she’s as high as a kite during a hostage negotiation), and for the main course, inevitable gross out (he spunks in his beard while masturbating to footage of her; his salient memory of her babysitting days is her noticing his erection).

Rogen’s broad-brush approach to the world of politics is very much of the same ilk as the ’80s movies he reveres so much: the shallowness of Working Girl, but with added weed. Despite being a pothead, Rogen’s character seems unacquainted with conspiracies (bar a gag about who killed Kennedy). And for a journalist, doubtless familiar with the culture, Flarsky’s entirely oblivious to the possibility of being under surveillance while working for and dating a high-ranking member of government. Indeed, it’s Andy Serkis’ media mogul – Serkis under a layer of prosthetics that were, apparently, at his insistence – who is responsible for hacking Flarsky’s webcam; no deep state here to worry about, only the President’s backers (also for the purposes of the plot, the Secretary of State is apparently under the blissful illusion that the President is the flagpole, until rudely divested of this re the influence of his backers, which rather indicates she isn’t really very aware).

All of which is merely to point out that there’s little in the way of smarts going on with the politics of Long Shot, nuzzling as it does the standard struggle for environmental change as a lazy crux. Theron’s great, naturally, and as gifted a comic actor as she is in serious mode, but she and Levine offer the material more respect that it deserves. Alexander Skarsgård plays the flirtatious Canadian PM, in a role I suspect was earmarked for James Franco before he became non grata.

The picture ends with Theron and Rogen in the White House, doubtless set to put the world to rights through the power of toking it easy. A great political romantic comedy that actually has some barbs and insights is possible – one was made more than twenty years ago, and it featured a stoned senator – but Rogen’s sub-Cheech and Chong reefer world view isn’t the means to deliver it. 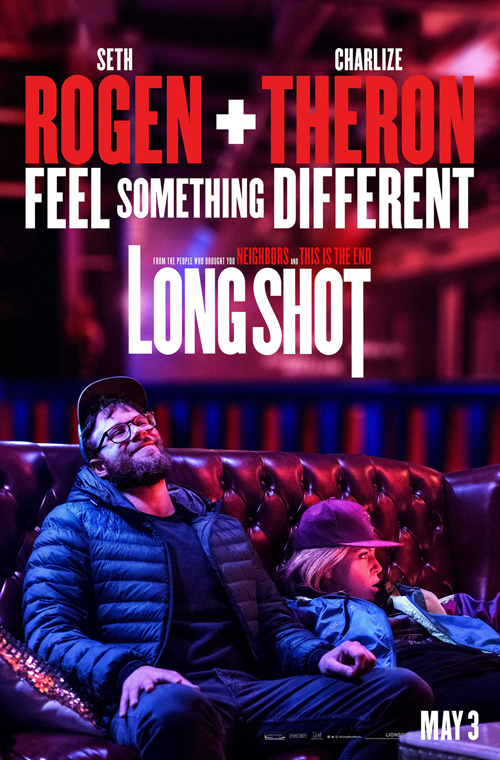