This is one act in a vast cosmic drama. That’s all.

Robert Wise was no stranger to high-minded horror fare when he came to Audrey Rose. He was no stranger to adding a distinctly classy flavour to any genre he tackled, in fact, particularly in the tricky terrain of the musical (West Side Story, The Sound of Music) and science fiction (The Day the Earth Stood Still, The Andromeda Strain). He hadn’t had much luck since the latter, however, with neither Two People nor The Hindenburg garnering good notices or box office. In addition to which, Audrey Rose saw him returning to a genre that had been fundamentally impacted by The Exorcist four years before. One might have expected the realist principals he observed with The Andromeda Strain to be applied to this tale of reincarnation, and to an extent they are, certainly in terms of the performances of the adults, but Wise can never quite get past a hacky screenplay that wants to impart all the educational content of a serious study of continued existence in tandem with the shock tactics of possession and courtroom drama.

And with regard to both the latter areas, Audrey Rose fails miserably. A big part of the problem is the title character, or rather her reincarnation as Ivy Templeton. Frank De Felitta’s 1975 novel, which he also adapted, was a bestseller, managing to blur the supernatural horror vogue with a flavour of New Age eastern mysticism. But if its literalist tackling of the metaphysical worked on the page, it quickly gets bogged down in sheer unlikeliness on the big screen.

The focus is on Ivy Templeton (Susan Swift), the troubled daughter of two New Yorkers, Janice and Bill (Marsha Mason and John Beck). They find themselves intruded upon by Elliot Hoover (Anthony Hopkins), a stalker claiming to be the father of Ivy’s former life. In embryo form, there’s an engaging mundanity to the unusual premise, while simultaneously offering the opportunity for a clash of beliefs and pricking of societal norms.

However, to deliver that, you need to believe in the performances, or you’ll quickly run into trouble. Linda Blair was considerably aided in The Exorcist by unnerving makeup and vocal augmentation/dubbing. Swift is entirely unconvincing; even her saucer eyes tend to suggest someone who’s been told there’s ice cream for dessert rather than the soulful depths of duality. And when it comes to flailing about wailing, as with a re-enactment of Audrey’s fiery demise, Swift’s acting is sadly rather pathetic, if not laughable.

Additionally, during the first hour, for all the abstraction involved, Audrey Rose succeeds in eliciting interest. A scene in which Hoover has inveigled himself into the Templetons’ apartment and managed to talk their daughter down from her hysterical state believably ends with Beck attempting to beat the living crap out of him (Hopkins, being Welsh, is having none of it).

But the ambiguous tone is entirely dampened when the film unaccountably launches – or lurches – into a court case, in which Elliot attests his innocence of abduction because he was attempting to bring peace to Audrey’s spirit (the idea presented is that she is “in terrible pain and torment” because she reincarnated almost immediately upon her death; she was not karmically equipped to deal with a new body).

The film takes it as read that Audrey has reincarnated, which is fine and dandy, but De Felitta and Wise end up pulling increasingly unlikely scenarios out of their narrative hat in order to enforce this, culminating in a rather facile Exorcist-lite sequence as part of the evidential proceedings. Norman Lloyd’s psychiatrist Lipscomb hypnotises Ivy in order to relive her life as Audrey but is unable to bring her back from this place (“She’s not Ivy” repeats Ant, identifying why the literal-minded shrink is unable to reach his patient).

Curiously – or not, given the decade – the picture ends on a downer of Ivy’s demise. Albeit, Elliot and a quote from the Bhagavad-Gita try to paint this as a positive (“Her soul is set free”). It’s hardly surprising the sentiment failed to provide much balm to the picture’s box office prospects. Thought-provoking fare on the page can easily be rendered trite if the tone is just a little off in movie form. Notably, Audrey Rose came out two months before another child horror bomb, Exorcist II: The Heretic, which rather drew the line under supernatural kids for a while. Wise wisely, or unwisely depending on how you view the results, went back to science fiction.

Audrey Rose is entirely without merit, but it’s fatally undermined by being simultaneously too earnest in its intent to succeed as a genre outing and too ridiculous to take seriously. 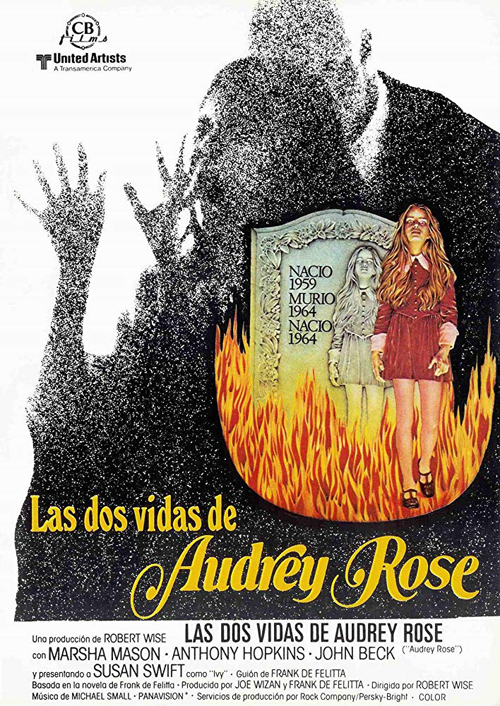