Chris Columbus’s sequel to his surprise 1990 box-office sensation, again produced and scripted by John Hughes, offers more of everything. More ultra-violence, more Macauley – rather than Maclunkey – Culkin precociousness as Kevin, more desperate attempts by his parents to locate their lost son, more sentiment ladled on with shovel. And more minutes – you really feel the entirely uncalled for extra twenty of dead weight. Home Alone 2: Lost in New York does, then, offer a case of diminishing returns for what is a virtual remake, give or take relocating to New York for a run around and attendant antics in a then-Donald-Trump-owned hotel (the Plaza).

Kate: What kind of idiots do you have working here?
Concierge: The finest in New York.

And yes, Donald makes a cameo appearance. Shockingly, the directions he gives Kevin to the lobby – “Down the hall and to the left” – are both on point and accurate. Hughes’ studious repetition of the first movie’s plot and emotional beats is both its strength and weakness. No one needs to hear Kevin’s “out of the mouths of babes” pearls of wisdom delivered to a homeless person. Particularly when that homeless person – Brenda Fricker, certainly capitalising on her Oscar, but possibly not in the most artistically responsible manner – is a carbon-copy, plus birds, of Marley in the first film, whom Kevin initially feared and then befriended in a lesson that it is always good to talk to possibly psychotic strangers. The more possibly psychotic, the better.

Johnny: I knew it was you. I could smell you getting out of the elevator.

On the other hand, there’s undeniable amusement to be gained from the replay of Kevin using footage from a ’30s gangster movie (this time Angels with Dirtier Faces) to mislead those who would interfere with his young-Ferris attempts at unimpeded leisure time (which includes ordering a stretch limo). Particularly when one of those misled is Tim Curry (as the Plaza concierge); his reaction to “You’ve been smooching everybody” is priceless. The only shame of it is that Curry’s character doesn’t get to engage in anything truly Machiavellian. Also on hand is Rob Schneider as a bellhop, but let’s not hold that against the movie generally.

Harry: I hope your parents got you a tombstone for Christmas.

The truly Machiavellian is reserved for returnees Joe Pesci and Daniel Stern, the latter perfecting his live-action Wylie Coyote expression. This time, they’re attempting to rob Duncan’s Toy Shop (the proprietor played by Eddie Bracken of Hail the Conquering Hero fame) but are reduced to chasing Kevin around his uncle’s deserted house, being hit by bricks, electrocuted, set alight, covered in paint, varnish, cement, falling through absent floors, impaled by various objects and flattened by others. All of this, memorably, elicited examination by a doctor who listed the actual deleterious effects of such extreme violence. Along with Roger Ebert’s entirely unconvincing assertion that “cartoon violence is only funny in cartoons”.

Concierge: Madam, there are hundreds of parasites out there, armed to the teeth.

As before, Catherine O’Hara is duly horrified at leaving Kevin behind, while John Heard never really looks all that concerned. Older brother Buzz (Devin Ratray) manages to be even more obnoxious, while youngest bed-wetting cousin Kieran Culkin sagely scoffs at the suggestion Santa Claus doesn’t visit hotels (“Are you nuts? He’s omnipresent”).

I’m not surprised Home Alone 2: Lost in New York made $100m less than its predecessor; Hughes makes the classic mistake of assuming bigger is better, when he’d have been wiser to distil the most popular elements and get out fast. It was only Culkin’s hiatus from acting – what’s that you say, he even returned? – that put the kibosh on Home Alone 3, at least for a few years, and when it did arrive, it was absent of Christmas, its star, and any general audience interest. Never mind, Disney now has it on its reboot list. I’m sure it will be every bit as inspired as all their other recent remakes. 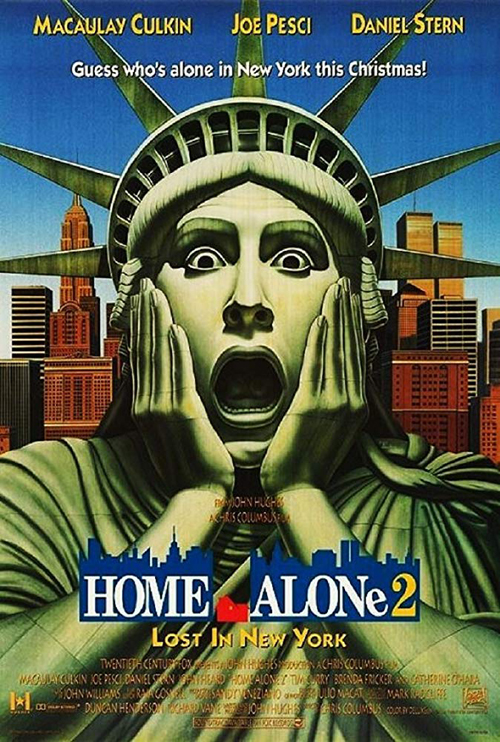