If I had eyes and teeth, I’d be a whole head.

A huge box-office bomb for Warner Bros, but unlike the later Escape from L.A., its problems can’t really be laid at director John Carpenter’s door. Indeed, it sounds as if he brought exactly the right instincts to the project (“North by Northwest meets Starman”); it’s almost entirely the presence of Chevy Chase that does for Memoirs of an Invisible Man, a vanity project the star had nurtured but which proved entirely ill-fitting and scuppered his serious thesping designs as quickly as they took form.

Perhaps Chevy envied the success of the likes of Bruce Willis – or sometime co-star Steve Martin – who transformed himself from a comedy-ish guy into a serious dramatic lead. Albeit, the genesis of Memoirs of an Invisible Man came prior to Die Hard, when Chase got Warner Bros to buy Harry F Saint’s novel of the same name. Why the studio felt this would remotely work or that they should indulge Chase may seem hard to fathom, but as William Goldman notes in Which Lie Did I Tell? he was the world’s Number Five box-office star in the mid-80s.

Certainly, Ivan Reitman, initially attached as director, baulked at the straight-drama directive, and the studio went with Chevy in a him-or-me ultimatum. William Goldman had been very much of a mind with Reitman on the tone (the screenplay, rewritten, is also credited to Dana Olsen and Robert Collector) and his take on the ridiculousness of Chevy’s intention, to explore “the loneliness of invisibility”, has accordingly become the plaque to hang around the picture’s failure.

I’ve never been convinced by Reitman’s directorial chops, however, even as a comedy director; he felt he had another Ghostbusters in the offing – doubtless he felt the same about Evolution, and look what happened there. Goldman was initially placated regarding the star and director coming at the project from different directions, with CAA suggesting “Just write the script. It will all sort itself out”. It didn’t. Goldman had to admit Chevy had a point, thematically, on the presumption that being invisible wouldn’t be a bed of roses – it had, after all, sent previous transparencies completely loony – but he came back to the harsh truth that while he liked the star, and the theme had merit, “I just didn’t want to investigate it with Chevy Chase” who had become famous through “playing a goof who had trouble with stairs”.

So Carpenter came in, worked with the new guys on rewrites, and directed Chase and Daryl Hannah as his romantic leads. Both of whom were, apparently, nightmarish to work with. More importantly, since its what’s up there on screen that counts, they entirely don’t deliver as a romantic couple. Carpenter’s quite right to make the movie essentially a chase, but Chase isn’t Cary Grant (although he did occasionally put me in mind of cardboard version of Warren Beatty). Whenever the picture stops for the love story or the contemplative elements, it sinks like a stone. Chase made a virtue of deadpan narration in the Fletch series, but his serious approach to the voiceover here is a killer. He has neither the range nor the gravitas, and while some of his quips are decent, they’re very much asides.

The irony is that, production-wise, this is pretty impressive. Carpenter has six-time Oscar nominee William A Fraker as his DP (The President’s Analyst, 1941 and WarGames amongst others) rather than his pal Gary K Kibbe. The special effects are, for the most part, quite special (the semi-visible lab, invisible Chase silhouetted in water). The practical effects, however… well, Chase in makeup looks like something out of Welcome to Marwen, and his blackface, turbaned taxi driver is… unfortunate. The score, by Shirley Walker rather than Carpenter, has a dramatically rousing Flight of the Bumblebee motif during pursuit scenes. It looks great and is highly polished, basically. Carpenter’s taking his time, and when you aren’t concentrating on Chase being in it, the flight of the protagonist and cat-and-mouse games work well.

It’s also helped considerably by Sam Neill’s villainous Jenkins; the actor knows he’s playing a less suave James Mason and has a lot of fun with the part on that basis. Carpenter was doubtless on board with the shadowy government vibe (also present in surrounding pictures They Live! and Village of the Damned), and their unscrupulousness is a lot of fun (Stephen Tobolowsky is Neill’s nervy superior, while Jim “Bishop Brennan” Norton plays a scientist on the wrong end of Jenkins’ clean-up operation).

There’s also strong comedic support from Michael McKean and Patricia Heaton as Chase’s friends who show up at their beach house while Chevy’s hiding out there, along with Hannah and English rotter Gregory Paul Martin. The latter has ungentlemanly intentions towards her and also delivers the best line, regarding Chevy’s likely fate (“He’ll probably wash up on the shore one day all bloated and eaten by crabs” – it’s all in the delivery).

The frustrating thing with Memoirs of an Invisible Man is that you can see how it could have worked, both as a comedy and a straight chase thriller, yet it ends up as neither fish nor fowl. It fails to up the ante sufficiently to succeed as a thriller and is stymied by Chevy’s presence in the romantic stakes (at one point, Neill refers to him as “cool, imaginative, elegant” and you’re “Huh?”)

Carpenter had detoured into low-budget fare because of issues with studio control, so arguably knew what he was getting himself into here; as a production, it’s one of the most accomplished pieces with his name on it, but as a complete movie, it’s crippled by a (self) miscast star and a screenplay that needed to decide what it wanted to achieve. As someone says of the semi-visible lab, “It’s not what it is. It’s what it isn’t”. 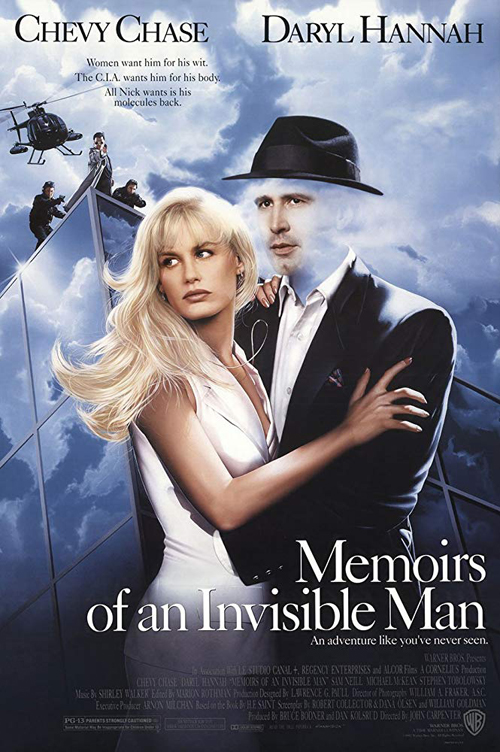