I can’t have you following me about eternity like the Flying Dutchman.

It seems as if every even half-successful science-fiction movie has spawned at least a failed TV version at some point. I haven’t seen Time after Time’s spin-off, but I’m unsurprised its premise didn’t successfully lend itself to an ongoing series format. Indeed, by the time the credits roll on Nicholas Meyer’s directorial debut, I felt he’d run into the limits of his (Karl Alexander’s) idea.

Time after Time’s faux-Victoriana contrasted with late-twentieth century San Francisco provides the missing link between Meyer’s prior Sherlock Holmes pastiches and his later contributions to Star Trek. You can see his love for literature (Melville, Shakespeare) but more especially the fish-out-of-water qualities later exhibited by Star Trek IV: The Voyage Home. For my money, that Trek outing is a more successful synthesis of the themes present here, even as it shuns some of Time after Time’s most essential features (the love story, a personified villain). The Voyage Home manages to deliver its excoriation of 1986 attitudes, lifestyles and values in a manner both pointed and humorous. In contrast, Time after Time is mostly just pointed.

I’ve tried to work out why the picture doesn’t quite work for me – this is my second go-round – and I think it’s cumulative. Partly, it’s simply that Meyer, a novice director, services his screenplay without much flair, very much learning the ropes as he goes. There’s little urgency engendered, either by his direction or the editing, which may assist the love story, but it does little for hunting the killer. Of whom, while David Warner is very good, there’s just too little of his John Leslie Stevenson, revealed as Jack the Ripper. It’s an attractively high-concept idea, and to be fair, is in another league to more recent genre mash-ups, but the most fascinating side of the equation – Jolly Jack loose in a modern metropolis – is largely left languishing.

Meyer himself said he wasn’t very interested in the Ripper side of the plot, or dwelling on his actions. He took the project on after Karl Alexander sent him pages from his unfinished novel, having been impressed with The Seven-Percent Solution. As a consequence, Stevenson is left stranded in terms of motivation; he loves 1979 because it’s so violent (“Ninety years ago, I was a freak. Today, I’m an amateur”), but when Wells, who in 1893 had confidently predicted “In three generations the social utopia will have come to pass”, decides to bring him to book and back to 1893, Stevenson seeks to escape the period (why not just off Wells, so stopping him “following me round eternity“?) Then he starts killing in 1979. And inevitably, Wells’ love interest is kidnapped. Stevenson’s fate also feels like a missed opportunity; something closer to a riff on Wells’ works, either past or future, might have been more fitting (“I sent him to where he belongs – infinity”).

Once he has set it up for all to be impressed by, Meyer fails to find anywhere interesting to take the premise. There’s some amusement seeing how well Stevenson responds to the fashions and forms of the era (disco especially), but this adjustment is mostly reserved for Wells. As played by McDowell, he’s a rather stuffy Englishman in a Holmes deerstalker – he even gives Doyle’s detective as his name at the police station, unaware that it’s known by all – the actor having opted against playing with him with a broad south-east London accent.

Meyer signposts the various areas where Wells was ahead of his time, most notably the emancipation movement, while also emphasising his emotional formality. But this is, to some degree, rather clunky in the playing. I didn’t find it especially sweet or charming, even knowing a real romance blossomed during filming between McDowell and Mary Steenburgen. It’s all amiable enough, but Steenburgen comes on like a Quaaluded Kate Bush, and Amy seems to spring more from ’60s liberation clichés than the cusp of the ’80s (“My work is my life, just like you or any other man” she says, objecting to the idea of being transported, disenfranchised, to the nineteenth century – although, her bank job isn’t all that – and later she exclaims “My God, Herbert. I’m practically raping you!” when he expresses concern he might be taking advantage).

Wells’ scenes with the police were surely an influence on Kyle Rees’ interrogation in The Terminator, but elsewhere, Meyer seems as flippant towards the mechanics of time travel as he is towards the motivation of the Ripper. At one point, Herbert and Amy travel three days into the future, where a newspaper headline announces her murder, which would assume that they return to the present, which they haven’t yet done (I know, it’s a regular time-travel conceit, but there isn’t even a discussion of the parameters here; I even wondered if the headline was intended to be a mistaken identification of the murder of Amy’s co-worker).

I have to admit too, that I’m not entirely sold on McDowell. Cast him as a character with an edge, and he’s riveting. As a buttoned-down hero, he’s perhaps too good at observing such strictures (perhaps if he’d been more like the actual Wells, especially with regard to the romance; this is a very romanticised portrait).* Warner, in contrast, had been going through his bad guy paces in The Thirty-Nine Steps and would follow with a string of such villainous parts (The Island, Time Bandits, Tron) leaves you wanting more. Maybe they should have swapped roles (the studio wanted Mick Jagger for Wells). Other notable incidentals are Corey Feldman in his second movie appearance (“Boy at Museum”) and Exorcist IV showing at a local cinema (what 1979 is this?)

Generally, I’d recommend Sherlock Holmes’ big screen attempts to bring the Ripper to justice (A Study in Terror, Murder by Decree) over HG’s; Pauline Kael may have been onto something that Meyer too inherently recognised in his attempts to shy away from the stark horrors of the Ripper’s acts: “The movie doesn’t full succeed… the Ripper… is too frighteningly sociopathic to fit into the film’s romantic framework”. Meyer had come on in leaps and bounds as a director by the time of his next effort, but Time after Time both sparks with its what-if conceit and then slightly underwhelms with how it pays if off.

*Addendum 08/08/22: Yes, closer to the actual Wells, a vocal eugenicist, would have been much preferred. 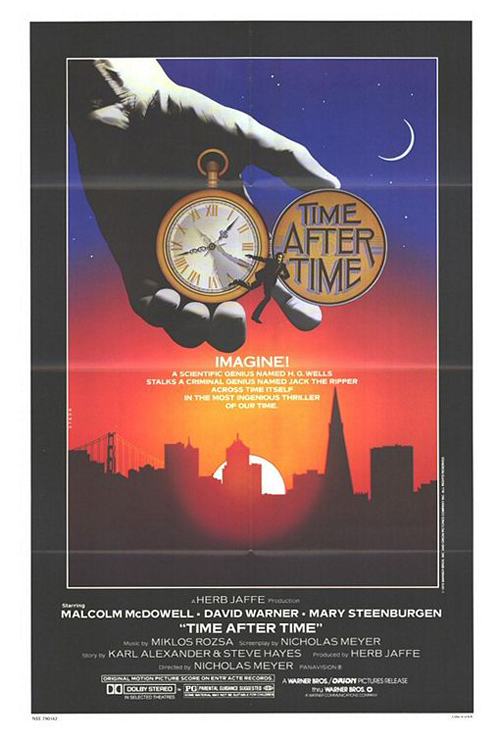 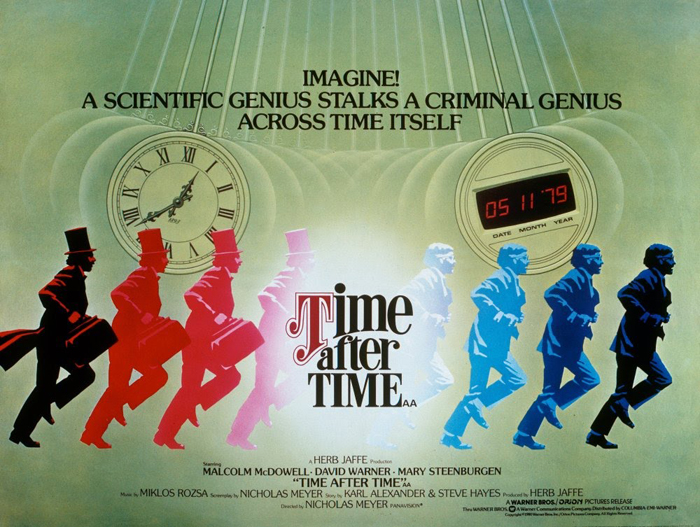