Columbia doubtless saw a Ghostbusters sequel as a licence to print money. Well, they did after David Puttnam, who disdained the overt commercialism of blockbusters – as you might guess, he didn’t last very long; just over a year – was replaced as chairman by Dawn Steel. Troubled waters were smoothed over – he’d effectively insulted Bill Murray, as well as claiming a sequel was going ahead; Ivan Reitman’s office responded that it was “The first we’ve heard of it” – and development put into high gear. But the studio ended up with a box office also-ran, thoroughly eclipsed by the summer of the Bat (Tim Burton’s movie opened the following week) and grossing less than half the original’s tally. Ivan Reitman put it down to a change in tastes towards darker fare, while Murray opined that the special-effects guys took over; both would have been better simply to admit that Ghostbusters II sucked.

I’m not the biggest fan of the original movie – it’s agreeable enough, but writers/stars Dan Aykroyd and Harold Ramis haven’t mustered a plot that can stand on its own two feet, which means it needs laughs, which are in short supply whenever Murray isn’t on screen. Even that wouldn’t matter so much, but director Reitman is no master of spectacle or scares, so Ghostbusters is shot through with a kind of “That’ll do” shrug. Which works fine – great even – for slouchy Murray’s smart talk, but it might have been so much more helmed by someone with an affinity for the genre (say, John Landis). Still, with Murray at peak popularity, and a raft of iconic elements – the theme, the logo, the car, the outfits, Slimer, Mr Stay Puft – its popularity was (and is) easy to understand.

The sequel seemingly arrived with Ramis and Aykroyd eager to please. Hence toning down the “adult” content to appeal to the younger fanbase of the interim The Real Ghostbusters cartoon series – all of whom would doubtless go to that “adult” content of the original as their first port of call – and redesigns to fit in with the show (Slimer).

The most obvious consequence is that Ghostbusters II is fairly toothless. Yeah, Bill Murray can deliver yucks even encumbered by a baby, but that doesn’t make this his best foot forward. Mostly, Aykroyd – and I’ll assume it’s him, as the screenwriter of the duo with a passion for the unexplained – has entirely failed to come up with a decent hook. The plot is a plod. There’s a river of slime reacting to New Yorker’s negativity (“Being miserable and treating other people like dirt is any New Yorker’s God-given right!”) And, not directly related, which is clumsy, the spirit of a sixteenth-century Carpathian wishes to possess the body of Sigourney’s son.

There are zero laughs or tension in either of these elements. And fatally, neither idea grabs you. The slime/negativity thing is the kind of wishy-washy crap that got us Superman IV: The Quest for Peace two years earlier (there’s a reason Aykroyd’s Ghostbusters III concepts never got very far, quite beside Murray’s understandable reluctance to return to something that seemed dead in the water). The team go into the sewers, the city tries to shut Ghostbusters down (again), and then has them committed (a sure sign the writers don’t have a good idea of where to take their movie). And there’s another large animated inanimate object on the loose (the Statue of Liberty this time).

In particular, the last things a Ghostbusters movie needs are protracted scenes involving a nipper (although, Ghostbusters 2020 sounds like it may be providing exactly that, for those with a hankering). Perhaps Aykroyd and Ramis were vaguely thinking The Exorcist/The Omen (not that there are any frightening elements involving Oscar), but I’d hazard that, in a box-office environment where Three Men and a Baby had just been the biggest hit of its year, cashing in on cute kids seemed like a no brainer (and, as it turned out, for another 1989 movie, Look Who’s Talking, it was).

It’s actually quite difficult to critique a movie like Ghostbusters II, because it’s one of those you watch, and rewatch, and still none of it really goes in. It’s so lacking in energy, pace and charm, it leaves you too enfeebled even to respond. Peter MacNicol purportedly came up with the idea of villain Vigo being Carpathian, but he’s unable to bring any humour to the possessed little guy, schtick that worked so well for Rick Moranis last time. Who is entirely redundant here. Still, he got the last laugh; Honey, I Shrunk the Kids was an unexpected summer smash.

Sigourney Weaver hopefully got well paid, because like Moranis, without being possessed she’s left with nothing to do other than look mildly amused at Murray’s quips. Ramis gets a few solid deadpan lines (“Let’s see what happens when we take away the puppy”; “You had a violent prolonged transformative psychic episode”), while Aykroyd’s content to drift along being relentlessly upbeat. Ernie Hudson still has the problem that he’s an actor in a line-up of comedians. Annie Potts probably comes out of this the best; despite having as small a role as Moranis, she digs into her slim pickings with verve. Generally, though, this was weak swill, with even the remix theme and a lacklustre (but popular) Bobby Brown track serving to emphasise how underwhelming the whole reheated soufflé was.

I started out by saying Ghostbusters II was a bit of a dud financially, which isn’t quite fair. It was one of a number of ’80s sequels that benefited from an intervening uptick in international exposure following the original, even as their home audience wasn’t wholly persuaded. So Ghostbusters II ended up only $15m shy of the original (unadjusted). The same year’s Back to the Future Part II was similarly blessed, also taking half the original’s tally at home while coming in at 87 percent of it worldwide (Beverly Hills Cop II was another example). But Columbia surely expected to capitalise on a sure thing, not hit a holding pattern (the same summer, Lethal Weapon 2 managed to double the original’s take, both at home and abroad).

The studio, then owned by Coca Cola, hadn’t had an easy decade, its mega hits (if we include Tri-Star) amounting to a handful of titles: Stir Crazy, Tootsie, Rambo II, Ghostbusters and The Karate Kid. The same summer as Ghostbusters II, The Karate Kid Part III also proved a disappointment, while the previous year, Rambo III became a famously costly fizzle (again, however, the global story was less severe).

Columbia just hadn’t been able to pick them consistently enough, which had made Coke nervous (as had the presence of Puttnam). Ishtar and The Adventures of Baron Munchausen were expensive bombs, and in 1987 and 1988 the studio couldn’t even muster a Top Ten movie for the year. If 1989 gave them When Harry Met Sally… and Steel Magnolias, it also yielded Family Business, Lock Up and Casualties of War. So the sale to Sony, three months after Ghostbusters II’s release, made a lot of sense. Less so the manner in which the company opted to throw money away by installing Peter Guber and Jon Peters as studio heads (they’d produced Batman, ergo…)

Not on their roster was a Ghostbusters III. Regarding which, Aykroyd’s enthusiasm was matched only by Murray’s indifference, although his idea – a next-gen type affair, owing to Bill not caring, and revolving around Hell being overcrowded – was mooted again by Ramis about a decade back. It now seems to have come full circle, although Aykroyd’s name doesn’t seem to be attached to the story. I’m no fan of the 2016 reboot, but I will say that, as fundamentally misconceived as it was, at least it isn’t as stodgily inert as Ghostbusters II.

I’m not remotely convinced 2020’s “official” third instalment sounds like a good idea either, since it seems to be riding less on inspiration than on Sony, desperate to resuscitate a franchise they’ve already given a good kicking, looking at Stranger Things and thick-headedly deciding “We’ll have some of that”. Plus, Jason Reitman directing an effects comedy? His writing partner Gil Kenan would surely have been a better bet.

I still think the best chance for saving the permanently faltering franchise was Lord and Miller taking the reins half a decade ago, but that was not to be. The key to the original was Murray’s irreverence in the face of the supernatural, and if that – or someone who can instil a similar tension – is absent, I suspect III will be another washout.

Murray was largely neutered in Ghostbusters II (his putting the baby down gag is about the best thing there). Still, Pauline Kael was happy. She must have been taking some great meds that summer, as she rated both Batman and this, with its “nice, lazy unforced rhythm”, preferring it to the original and suggesting “You can’t remember what you’re laughing at, but you feel great”. If only. 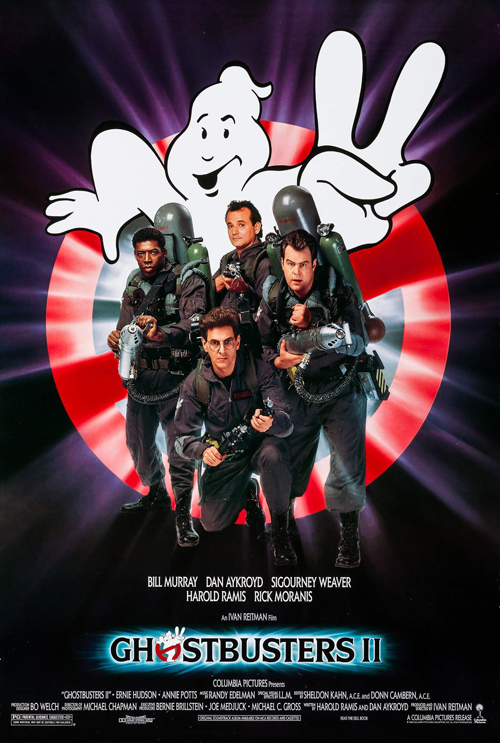