You have a fine ear, Mr Steed. I hope you hang onto it.

Another first-rate Avengers from Terry Nation, this – out of six for the series, half of them are classics – with the kind of nasty home-invasion premise that has been frequent fodder for psychological horror flicks of the last couple of decades. Only, in this case, in much more genteel form. I don’t think it’s quite as strong as Legacy of Death and Take Me to Your Leader, but it’s near enough.

Grenville: I can’t bear raised voices. And hysteria in a man is very unbecoming.

Fenton Grenville (Tom Adams, 1.17: Death on the Slipway, 1.21: The Far Distant Dead, Vorshak in Warriors of the Deep) is an entirely charmless but perfectly cultured Avengers villain, meaning that his cruel edge stands out, where others usually exude a certain degree of winning charisma.

Grenville: I don’t think they want any coffee.
Sexton: I don’t blame them. It’s awful.

His companions aren’t much better. Sexton (Garfield Morgan, 5.1: The Fear Merchants, 6.13: Game – he looks a little like Jimmi Simpson from the Westworld TV show) is his righthand man and a budding cook (the first thing he does is complain about the coffee, later preparing dinner).

Lomax (Keith Buckley) has the demeanour of a rooftop assassin with a sniper’s rifle, so it’s appropriate he’s in charge of firing the deadly missile at the conference.

Then there’s Circe (Hilary Pritchard) who seems to be modelled, fruit-loop-wise, on Ola in 3.7: Don’t Look Behind You (“Oh, I always use my left hand when I meet people. It confuses them”).

The manner in which Grenville imposes himself on the Bassett house as if he owns the place, encouraging Laura (Elizabeth Sellars) to assume her husband Bill (Michael Gwynn, Lord Melbury in the first Fawlty Towers, A Touch of Class) knows him until Bill arrives oblivious, is chilling. There’s a sense he could take deadly measures at any moment. Which he does, when major domo Groom (John Comer) meets his end via an injected phosphor bomb.

Grenville: I’m glad it wasn’t either of you who made the break. You’re such delightful people.

I wasn’t entirely clear on the efficacy of this strategy, developed by Circe (“It’s nice to be nearly a genius when you’re as pretty as I am”), since the bombs are triggered by the flick of Grenville’s lighter. There’s no indication that each implant has a different frequency, so why weren’t the Bassetts killed when Groom’s went off? And why, at the climax, when Steed is threatening Grenville (a bomb is stuck to the villain’s neck – for whatever reason he seems reluctant to pull it off), doesn’t he call Steed’s bluff, since surely his friends would be killed as well?

Steed: I haven’t seen a room clear so quickly since Freddy Firman took a live skunk into the Turkish baths.

If I have a major criticism of the episode, it’s a similar one to Avengers Forever (which is surprising, as I often disagree with their takes); Steed is too easily ruffled, and not just physically. His arrival – celebrating Christmas in February, a nice touch that he and Bill lost track of time while held prisoner in Nanking during the WWII – is, at first, exactly what you’d hope for, besting the irritated Grenville in party games (“You ought to leave here, Mr Steed. Fenton doesn’t like you at all”), trading flirtatious witticisms with mad Circe (“Do you think I’m pretty? I think I am. I think I could be very pretty”: “Who am I to argue with a lady?”; “I spent all my money on new noses”: “Well, everyone should have a hobby”) and prowling the house at night looking for evidence of foul play before being discovered by Grenville and trying to get the lowdown on whether he knows his Monets from his Renoirs (“It’s almost as if you were trying to catch me out, Mr Steed”).

Grenville: A hundred guineas, Mr Steed. For the man who makes the first kill of the day.

As a result, when Grenville challenges Steed to a hunt at dawn, one assumes this will build to his just being plain better than the bad guy (for example, 4.22: A Touch of Brimstone or 4.25: A Sense of History), outsmarting him on the field in a deadly duck hunt. Instead, Tezza decides to play things for something approaching realism – well, apart from the radio-detonated phosphor bombs and the silly missile in the turret room – and the promise of a hunt to the death ends up as a fizzle. We get an injured Steed (no hallucinatory Emma as in 4.13: Silent Dust) hiding out while his shoe sinks in a bog, and only showing up for the finale after Tara has arrived and been detained upon attempting to leave.

Grenville: It was careless of me to leave Steed’s umbrella and hat. But it was even more careless of you to betray that you’d seen them. Very careless indeed, Miss King.

There are some nice moments during this, such as Special Branch arriving to check the place out, the only reason the Bassetts were kept alive in the first place (“You can go on living. You never know. They might come back”). There’s the familiar tension of will they/won’t they say something. It’s at this point we learn the house was needed due to its proximity to an important event in the area (“I intend to assassinate the foreign ministers of several countries”).

Tara: Well, how was your stay in the country?
Steed: I should have stayed in town. That’s the trouble with the country. Nothing ever happens.

Generally a fine episode then, with director Robert Fuest bringing a similar claustrophobic feel to his earlier Pandora. The coda is a bit of a lame one, but at least the days of Tara giving Steed gooey eyes are long gone… What’s that? There’s one episode left…? Tara breaks a window playing invisible golf, so at least there’s a touch of Emma-era surrealism to it (“Oh pity. You should have used a Number Two iron. Or four”). 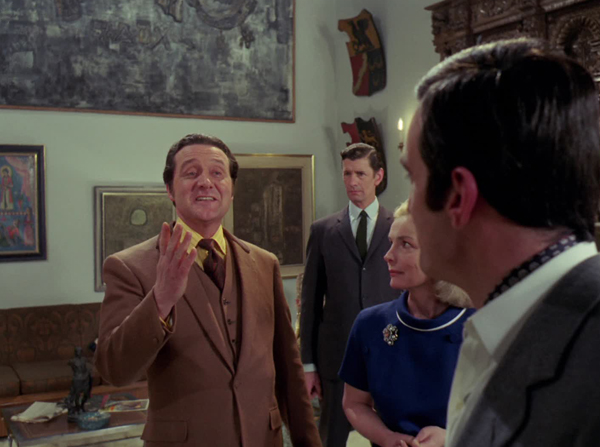 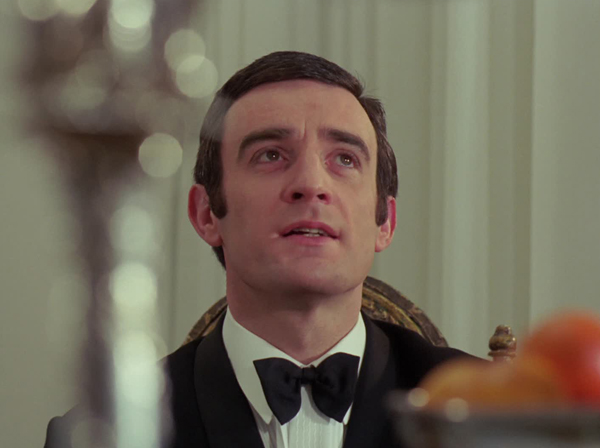 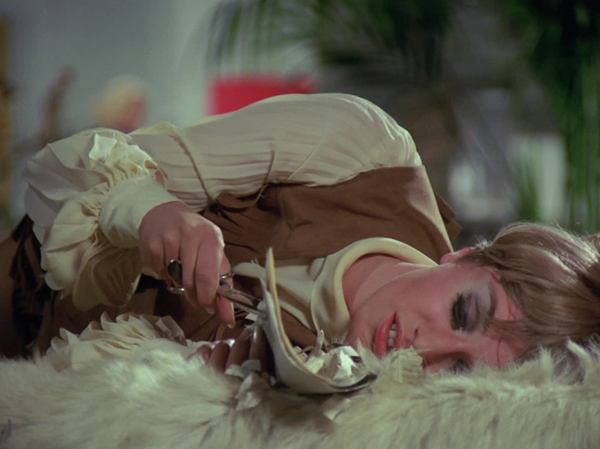 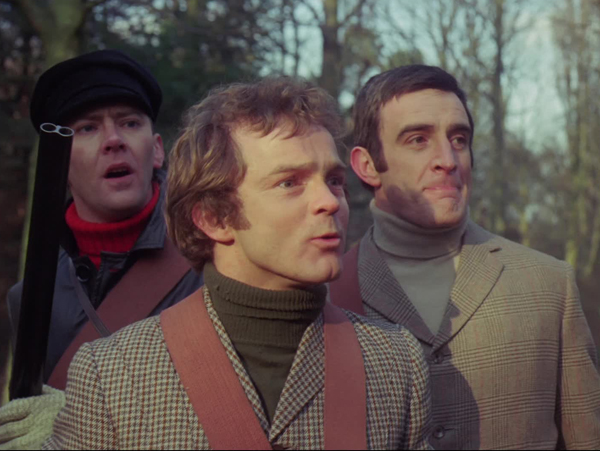 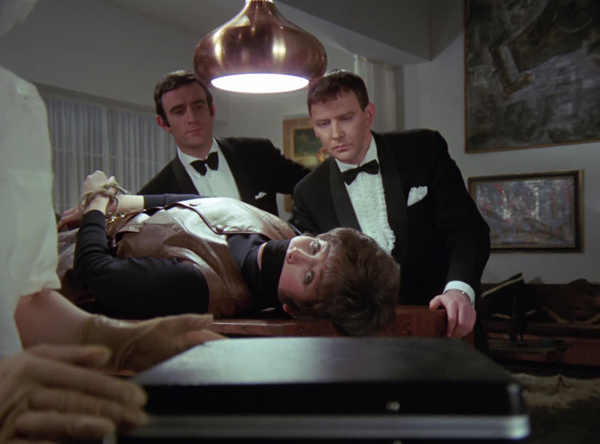 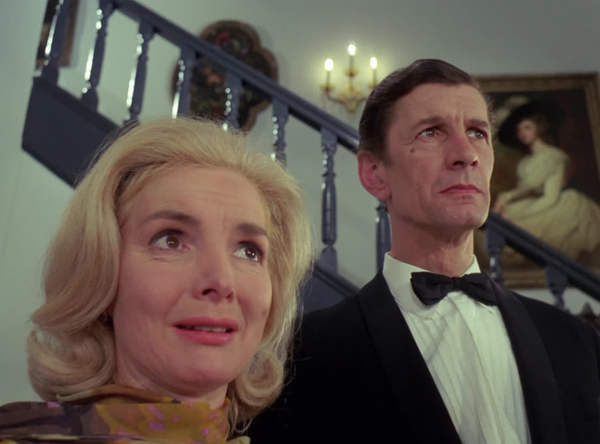 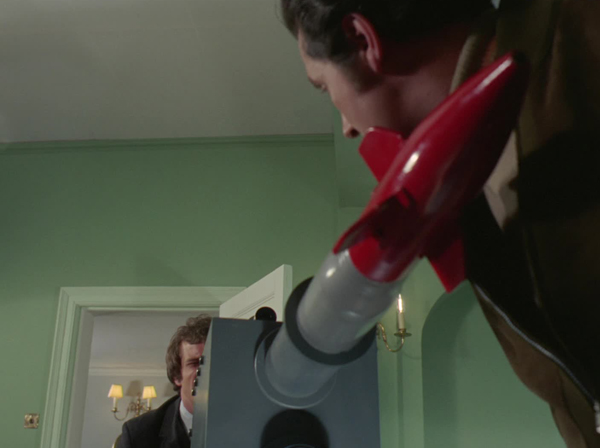