My security device is now primed. I will give audible warning of any unauthorised contact.

The Avengers
6.24: Take Me to Your Leader

Terry Nation hits another bullseye – or near enough – with Take Me to Your Leader, in which he shrewdly uses a similar “trail of suspects” approach to previous winner Legacy of Death. Steed and Tara are required to navigate a suitcase – one that provides the bearer with instructions – to its owner when – in theory – it’s required to be passed from enemy agent contact to enemy agent contact in relay. It isn’t perhaps as uproarious as his previous teleplay, but more than makes up for it in inventiveness.

Andrews: Who have you got out there? The invisible man?

It’s a means of transmitting vital secrets used by the other side, although it seems, in this instance, it contains half a million in notes. The first contact turns out to be a dog, and with pickup man Trent (Cliff Diggins, 4.8: The Gravediggers, 4.15: The Hour That Never Was, 5.12: The Superlative Seven, 5.17: Death’s Door) badly injured, then dead, it’s up to Steed, arriving breezily at the eleven-minute mark, to fill in (“I’d like you all to meet Mr Strauss, Mr Richard Strauss”).

Nation’s careful to play on expectations here, such that Steed requires Tara to save his bacon several times, the first when he fails to consider that the wardrobe he’s required to place the case in has a false back (it looks as if Condon – Raymond Adamson, 2.7: The Decapod, 3.8: The Grandeur That was Rome, 4.20: The Quick-Quick Slow Death – has got away, until Tara pops up in the seat of his car behind him). Then when Steed has to deliver the case to Miss Graham.

Sally: Are you trying to bribe me, Mr Seed? Oh good. Frankly, my susceptibility to bribes is one of my few failings.
Steed: Then we both know where we stand.
Sally: Good, then let’s talk money and not lollipops.

Steed arrives at a dance glass for six-year olds run by Audrey Long (Penelope Keith, 4.2: The Murder Market, 5.14: Something Nasty in the Nursery), but Miss Graham, Sally (Elizabeth Robillard) turns out to be one of the juniors, and an extremely mercenary one at that. It’s necessary for Tara to sort out Audrey when Steed gets coshed, although she has to be persuaded from trying to plead with Sally for the location of the key that will give the next location when it’s turned in the lock (“Don’t waste time with the girl talk, I should think she’s one of the Gnomes of Zurich”).

Robillard’s no child prodigy as performers go, but she more than gets away with delivering the lines and provoking the requisite laughs (Steed tells her money isn’t everything when she receives her £25 bribe, to which she replies “Oh Mr Steed, don’t shatter a little girl’s illusions”).

Cavell: I was right about one thing. She certainly has style.

Tara has to make the next contact, being as it would have been Audrey, and duly meets Cavell (Michael Robbins, 1.26: Dragonsfield, 2.6: Mr Teddy Bear, Richard Mace in The Visitation), a sleazy type keen on returning to see Tara when he’s done his business. Amusingly, he keeps his key under his toupee. And the tape somehow seems to know to sort out Tara (“You will kill your last contact”), even though Audrey wouldn’t have been able to relay that she was an impostor.

But then, how did it know to shout “Stop! Thief!” in the teaser scene when Holland (Matthew Long) tried to steal It from Shepherd (Michael Hawkins, 1.24: The Deadly Air, 3.4: The Golden Fleece)? So he goes back to kill Tara, only for Steed to break in and, through subterfuge, incite Cavell to give her the next address (“I’m sorry sweetheart, really I am” mocks Tara as she and Steed exit).

Captain Tim: If anyone had told me, I’d never have believed it. That last blow. What did you hit me with? An iron bar? Your good. Very good. Superlative even.

It’s Tara who needs assistance – albeit, she’s doing a pretty good job of things – at the next meet, since Steed knows Captain Tim (John Ronane, 5.22: Murdersville), who runs a karate class. It isn’t terribly convincing, given Robbins’ physique, that “Cavell is supposed to be the only person in the world who could beat me in a fight”, but a whack with the bowler puts paid to him; with Tim’s leg broken, it’s on to Shepherd again, succumbing to impalement on a cello. Fortunately, Tara happens on the notes on a harp; some amusing banter here, with Steed unable to play the tuba, despite having one in his apartment (“They’re to put the flowers in”), and Tara able to play the trumpet (“First time”).

Briefcase: I am a substitute case, designed to mislead any pursuers. To maintain security, it is necessary that you do not survive.

For a guy known for his back-of-a-fag-packet scripts for Doctor Who, Nation’s both consistently witty and inventive in his Avengers contributions (well, aside from Noon-Doomsday). Here, at the point the pass-the-case needs a little oomph, he gives us two different cases to follow, one of which leads Tara to a crypt and potential poisoning, the other has Steed chase it to… Mother.

Steed: They were obviously trying to cast suspicion on you. It might have worked if I hadn’t been involved. Well, you’re certainly no traitor. As far as I’m concerned, despite your little foibles, you’re above suspicion.

Mother: Thank you very much for saying so. Foibles?
Steed: The problem is–
Mother: What foibles?!

I’ve mentioned before how highly I rate Newell’s regular status on the series, and he’s on great form here (“I am in a creative mood, Rhonda. Trundle me”), especially enjoying the weight of suspicion bearing on him (“I think I make a very good number one suspect”).

There has to be a weak link, though, and that’s Nation making no effort whatsoever to hide that Stonehouse (Patrick Barr) is the bad guy. And there’s no way Glasgow (Henry Stamper, Anton in The Enemy of the World) is any kind of red herring. This mightn’t have been so bad, but Stonehouse is then given one of the worst confessionals ever (“All right. So it was me all along. Doesn’t matter now. There’s enough here to enable me to disappear forever”).

Steed: He’s a teeny bit picky with his food. Likes venison, steak tartare and vintage port. Other than that, he’s no trouble at all.

Still, the two cases Stonehouse gets confused with almost makes up for it. Even more so one of the absolute best codas in the show (the best?) is devoid of Steed and Tara, but for their voices; a conversation is carried out via suitcases, one brought in by the adorable Fang, discussing who will look after the poor pooch (“Just one more thing. He will insist on inviting all his friends round to stay”: “It shouldn’t happen to a dog”). 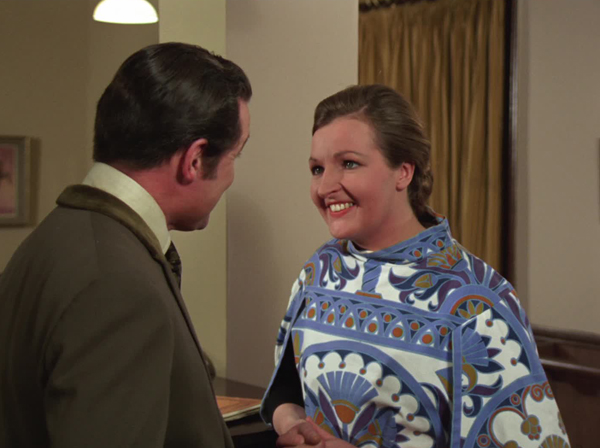 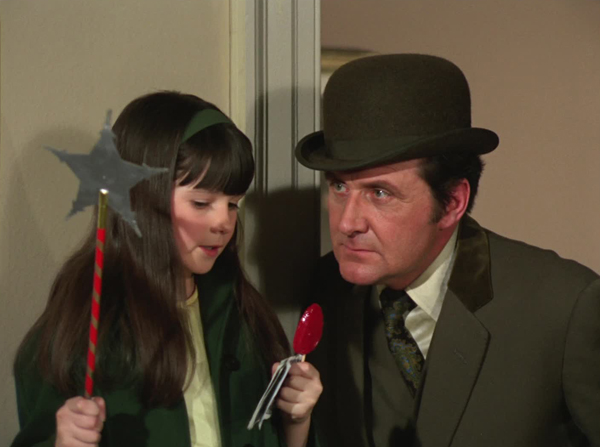 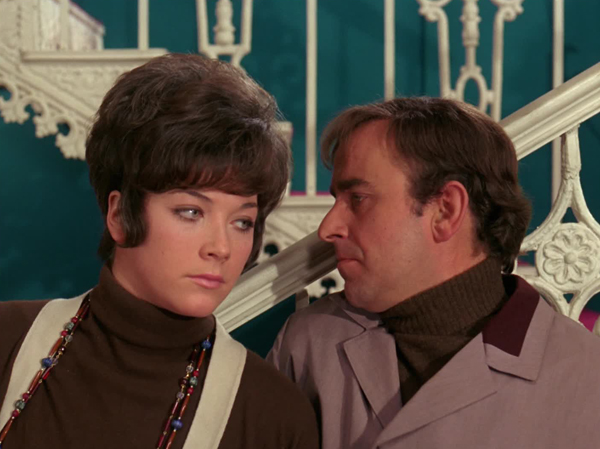 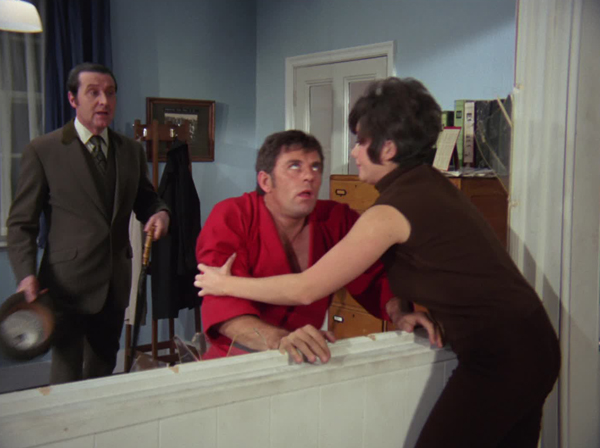 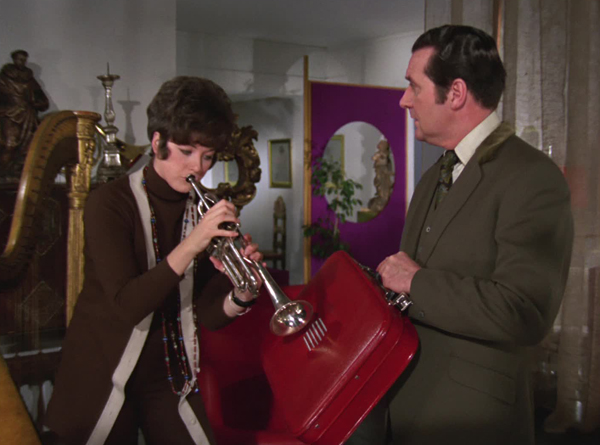 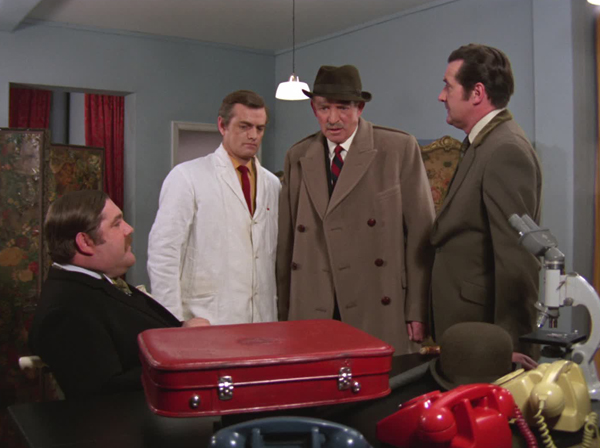 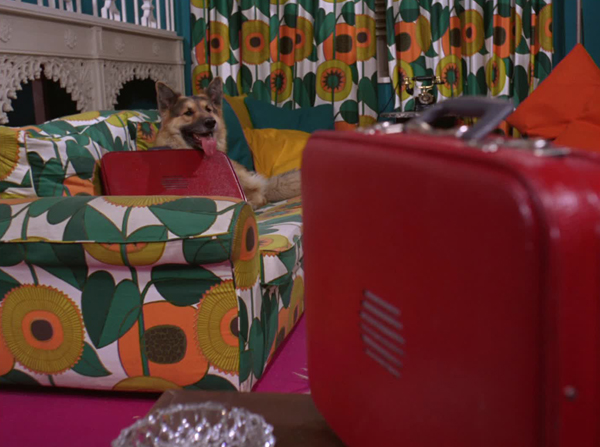