Extraordinary creatures. I’ve never been able to understand what motivates them.

Another quality episode from Jeremy Burnham, with a plot simultaneously both daft and clever (so very Avengers), but the biggest standout is the terrific performance from his wife – and later Children of the Stones lead – Veronica Strong, first seen as an aging, fag-ash cleaning lady with a strange knack for attracting men in the Ministry, and then as her “real” self, a dazzling beauty.

Tait: They were anathema to him, Steed. Sheer anathema. Mention women’s suffrage and he’d go purple in the face.

Martha appears to be the real name of Strong’s character as well as that of her alter ego, which might be a bit careless. She’s the source of the security leak at the Ministry, of course, secrets pertaining to missile redeployment, and she’s been picking on Sir Rodney (Robert Harris), who couldn’t have possibly been interested, as we learn from colleague Tait (Brian Oulton, 3.24: The Charmers): “That’s ridiculous. Rodney was a dedicated misogynist. One time, he and I even considered forming a club for genuine women haters”. Rodney’s soon for it when Metcalfe (David Baron, Ralpachan in The Abominable Snowmen) walks in on them; she tells Rodney to kill him. Later, she shoots Rodney.

Bromfield: How does it feel to have every senior officer at the Ministry in love with you?

The mastermind behind all this is Bromfield (Terence Alexander, 4.1: The Town of No Return, 5.9: The Correct Way to Kill), who has placed microdots on each page of a book the Ministry men are enticed to read, “Constantly transmitting a subliminal message on every page”. The message: “You will fall in love with the next person you see” (“This could be more devastating than the atom bomb!” comments Steed). The reasoning is that love is most effective because it’s the emotion of co-operation.

Alexander lacks much in the way of menace, but he does pull off his final scene with aplomb, which rather makes it all worthwhile. The conceit is remarkably well sustained, making inspired use of twists within its weird logic. Other Ministry victims we see are Roxby (Norman Pitt, 1.25: A Change of Bait) and Fryer (Frank Gatliff, 1.13: One for the Mortuary, 2.3: The Sell-Out, 2.24: A Chorus of Frogs, Ortron in The Monster of Peladon).

Burnham writes eccentricity for the show just right, and there’s a string of oddball scenes here, including Tara’s visit with Bellchamber (Peter Stephens, Cyril in The Celestial Toymaker, Lolem in The Underwater Menace), in pursuit of the brand of perfume worn by Martha (Reckless Abandon); she gets the wrong Bellchamber, this one being his brother:

Tara: How did you know I wasn’t looking for you?
Bellchamber: Nobody ever does, madam. You see, I’ve got no personality.
Tara: What, none at all?
Bellchamber: Not an iota.

Tara’s very much on the ball here, instantly reaching the conclusion that Sir Rodney’s behaviour derives from being in love, while Mother pooh-poohs her. It’s questionable, though, why, having had her list of clients burned by Freeman (Larry Taylor, Living in Harmony and Many Happy Returns), she doesn’t just go back and get another (did I miss an announcement that Bellchamber had been killed?) She gets a nice parting swipe at Bellchamber:

Tara: Oh yes, could you send me a case of Lily of the Valley.
Bellchamber: Certainly, madam.
Tara: Crushed by your brother, of course.

Tara will eventually suffer an attack of the microdots, but before her comes Tait, who unfortunately for Martha is beaten to him by Policewoman Grimshaw (Ann Rye):

Grimshaw: Are you the owner of the car number 308HYH?
Tait: Yes.
Grimshaw: You are parked in a no parking zone.
Tait: Am I?
Grimshaw: Yes. Have you anything to say?
Tait: Yes. I love you!

It’s a most amusing scene, with Tait’s earnestness falls on bemused ears (“I want to take her away from London into the soft warm sun, to a place where her delicate, fragile beauty can blossom into the rare, exotic flower she really is”).

Tara manages to get spiked into falling for Bromfield, who then invites her to leap out of the nearest window, having been slighted in love. Most notable of this scene is that Macnee apparently cracked two ribs trying to hold onto Thorson and, well, watching it, you aren’t really surprised.

Thelma: A scare like that could give a girl grey hair.
Steed: Well, I’m sure that whatever colour your hair, you’d still be equally attractive.
Thelma: It’s not original, you know.
Steed: Your hair?
Thelma: Your line. It’s not original.

That doesn’t stop Macnee from being on great form – “If you’re wanting to sell that, I er, have one already” he advises when Fryer points a gun at him – particularly earlier, when he pays a call on Casanova Ink (helpfully, Freeman was wearing a ring with the name on it).

He meets whom he thinks is Rosemary Z Glade but is actually Thelma (Patsy Rowlands, on magnificently bewildered form), who simply types the ingredients for a novel into a piano keyboard; Rosemary’s a computer designed by Bromfield (“There you are: instant romance”), albeit it isn’t perfect and she can be a very bad speller sometimes, while in one case “Instead of boy gets girl it kept coming out girl gets gorilla”. Steed is resolutely a smoothy, particularly his fannish line when he still believes Thelma is Glade:

Steed: I’ve read all your books.
Thelma: What, all 437?
Steed: On a cold winter night, I love nothing more than curling up in front of the fire with Rosemary Z Glade.

Nevertheless, he opts out of relying totally on his charm, stealing a copy of a microdotted novel and using it to defend himself from the collected attentions of Martha, Bromfield and Thelma (“Now, one of these takes a few hours. I wonder what twenty will do”).

Steed: Go on, admit it. I’m irresistible.
Bromfield: Well, I must say, Steed. You seem a very… decent sort of chap to me.
Martha: Command me.
Thelma: Ooh, your lovely.

It’s particularly amusing to see Blomfeld going moderately gay for Steed. Indeed, with the rampant misogyny and Steed being accidentally pursued home by swarms of screaming school girls in the coda (“They’re crazy about me. It is no joke being a teenage idol”), there are a number of cheerfully only-of-its-era elements with regard to sexual mores.

Tara also falls in love with Steed, but it’s almost as if there’s no difference, since she’s like that at the end of every flipping episode (he hits her with his hat, which he should have done a long coda ago). A note for Mother’s den: entry via a manhole (Steed drops straight down) and cricket nets about the place as Rhonda bowls. At this point in Season Six, perhaps by sheer dint of numbers, the show’s reached a run of quality unmatched by any bar the fourth. And people decry the Tara King era. 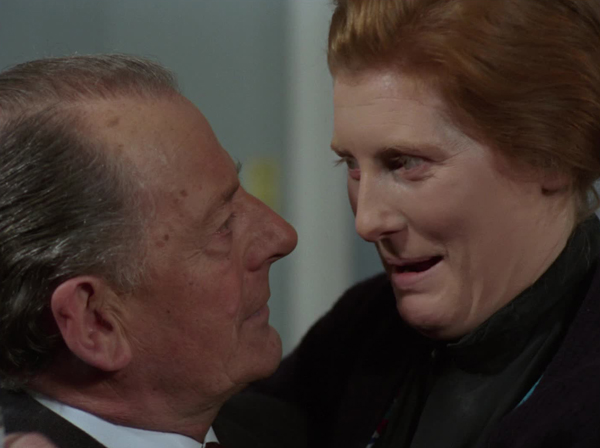 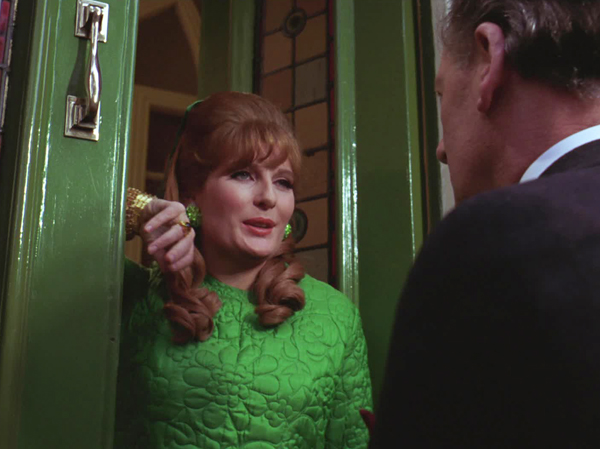 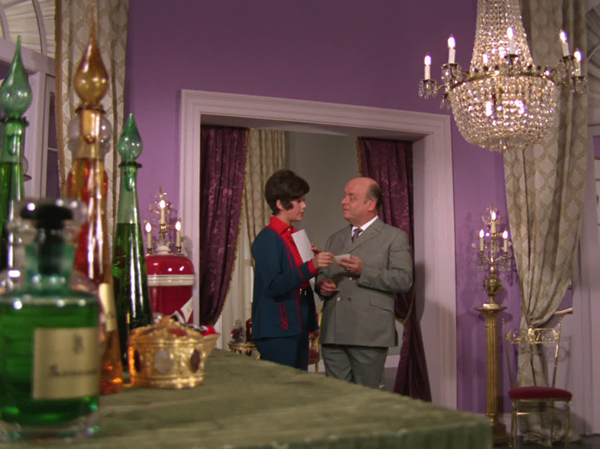 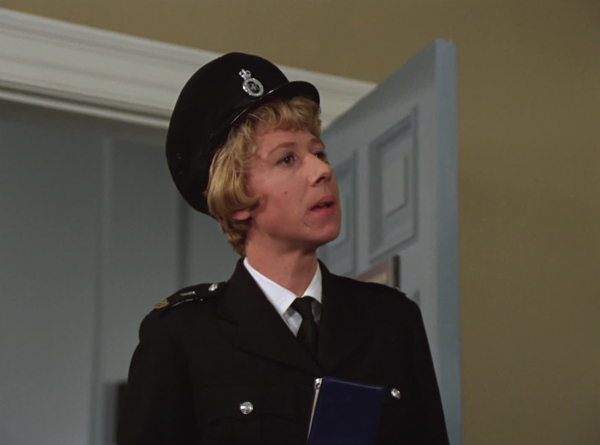 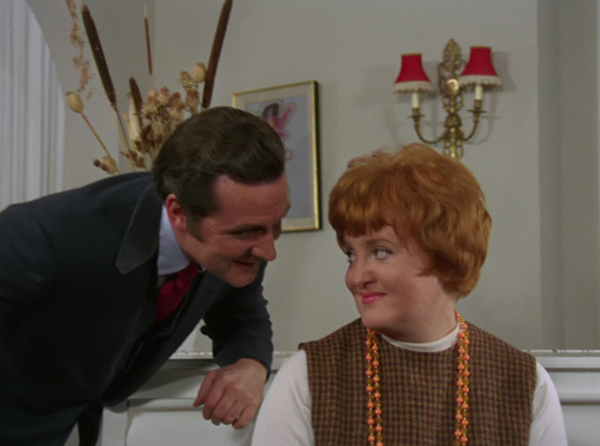 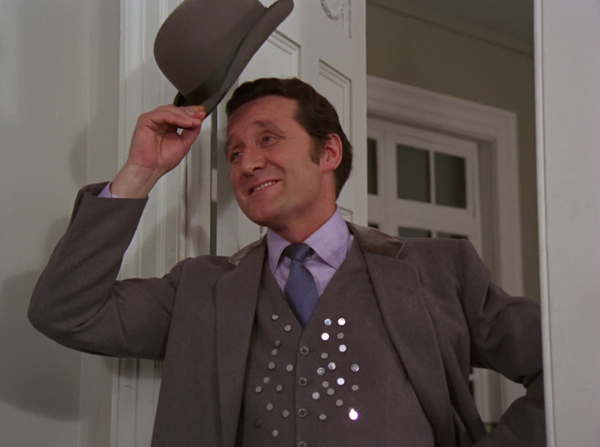