I’ve got a problem in timber technology right here.

The Avengers
6.20: The Rotters

David Freeman’s sole contribution to the series feels like he’s been writing The Avengers for years. Most particularly, the Mrs Peel era in which bad guys (rotters, even) bump off a list of parties connected to some eccentric enterprise or group. Which came first, the punning title or the plot? It scarcely matters, since they’re equal of each other. Director Robert Fuest, meanwhile, continues his domination of the season’s best visuals.

George: You know, I despise the working classes. They’re so…
Kenneth: Working Class?
George: Quite.

If hit men Kenneth (Gerald Sim, 2.1: Mission to Montreal, 3.19: The Wringer, 4.4: Dial a Deadly Number) and George (Jerome Willis, 2.15: Intercrime, 4.24: How to Succeed at… Murder) recall the polite bowler-hatted assassins of 3.24: The Charmers/ 5.9: The Correct Way to Kill, that’s possibly intentional, as their etiquette-driven ruthlessness is entirely class conscious. Freeman’s comedy credentials are much in evidence with their methodology; they’re armed with dry rot guns that instantaneously disintegrate any wood in range to dust (accompanied by a suitably thunderous sound effect). As we witness on a door during the teaser, and later a piano, with Steed ending up covered in the tree-free components.

Employees of Wormdoom Ltd, Kenneth and George are hunting down ex-Institute of Timber Technology students who shared a group photo; they discovered a dry rot mutation (“Dreadful stuff, spreads like wildfire. We made a pact to keep quiet about it”).

Sir James Pendred (John Scott) is served his in the teaser, then his manservant (Harry Hutchinson, 4.3: The Master Minds). Daffy Professor Palmer (John Nettleton, 5.5: The See-Through Man), who was able to tell Tara the names of the men, is killed by another associate Sandford (Dervis Ward), more your straightforward thug type. The others are Victor Forsythe (John Stone, 3.14: The Secrets Broker, 5.125: The Joker), Wainwright (Charles Morgan, 1.2: Brought to Book, The Abominable Snowmen, The Invasion of Time) and Mervyn Sawbow (Frank Middlemass).

Pym: Look, I’m very tied up at the moment, as I told you just now. I have nerbium teselartum in the hammer beam, and I have hillertroops bijalum in the perlins. So after all that, would you think me very rude if I went and have a sit down?
Steed: No, after all that, I wouldn’t.

There are two red herrings thrown into the mix, since the mastermind is bound to be one of the group. One being the casting of suspicion on Sawbow, whom Palmer considers has “no principles”. Sawbow turns out to be obsessed with aging new furniture to an antique state, but he also wants a meeting with someone (presumably Wainwright), so Steed puts Tara onto him.

Wainright’s death is the other red herring, Tara finding him lying in a coffin, having expired from overwork. It’s a shame this device was used only a few episodes ago (Legacy of Death), and one does wonder how much time Wainwright spends in his coffin for show purposes, since he’s still there when Tara returns later. Perhaps, like Emma in 4.8: The Gravediggers, he spends his time getting pissed. The coffin is courtesy of British Burial Caskets (!), with Parbury (Harold Innocent, 3.16: The Medicine Men) helpfully telling Tara that the company is a subsidiary of Wainwright (and that the coffins use NeverRot, manufactured by Wormdoom).

Kenneth: Never mind what he plays, John. What do you play?
Steed: Ah, tea! Splendid. Give the lady a hand.

Forsythe has been in Africa, but is due to return, which leads Steed to pay a call on his plastic flowers-loving – “They last so much longer” – mum (Amy Dalby). Where, in the best scene of the episode, he finds Kenneth and George also waiting. All are making themselves out to be friends of Victor, but Steed fools them into agreeing to Forsythe’s musical prowess in order to show their hand (“It was Edwin who plays clarinet”), the popping in and out of Mrs Forsythe requiring them to observe appropriate manners and decorum.

Until she goes to get the sugar, whereupon Steed throws tea at them. And then they make their escape, with the aforementioned piano all over Steed (“John, you’re very naughty. Now, you’re to put those things in the piano, wherever it is”).

Tara: If your friend knew that you’d killed a girl, he’d never forgive you. Would you?
George: He’s got a point, you know. I wouldn’t.
Kenneth: I say, that’s a jolly awkward situation.

Kenneth and George are very amusing, although I’m never quite convinced Willis actually is a gentleman. That may be intentional; he seems to look to Kenneth for a steer, such as on the appropriateness of murder by strangulation (“Rather unpleasant, I should imagine. Not a method a gentleman would use”: George replies “Oh quite, rather vulgar”). Later, Tara craftily obliges him not to kill her on the basis that it wouldn’t be cricket; fortunately, Sanford, more than willing to do the honours, enters at this point (“On my word, that was a sticky moment”), leading to a cheerful exit (“Toodle pip, old thing. Chin up”).

Most viewers have had cause to remark on an earlier encounter with Sandford, which may have been an influence on The Texas Chainsaw Massacre’s scene with the truck driver, where rather than driving off, Tara decides to fight, then run away from him, when he appears wielding an axe.

Wainright – suitably absurdly – plans to blackmail the country (and the world) with the threat of dry rot released through pillar boxes. He wants £1bn to stay his hand. Mother’s to be found in an inflatable office in this one, although the plastic theme isn’t explicitly a reaction to the dangers to wood inflicted elsewhere. The coda features a whacky giant mushroom (Steed’s making an omelette). I guess this is a reference to the dry rot fungi, but it isn’t an overtly stated connection. 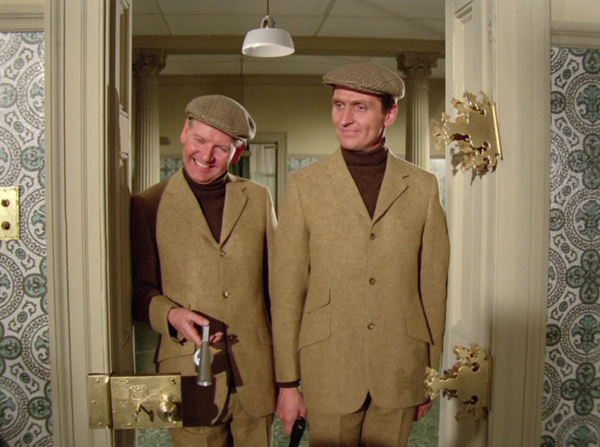 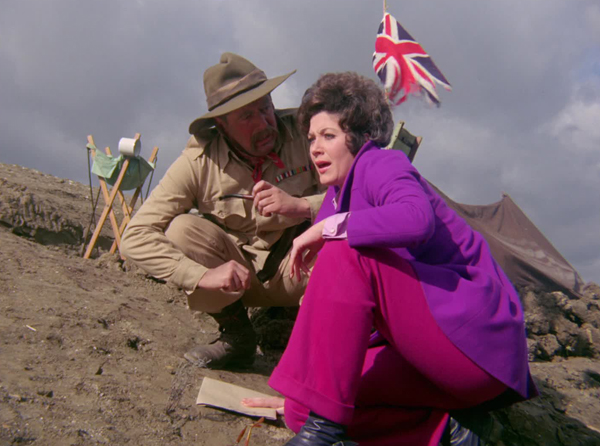 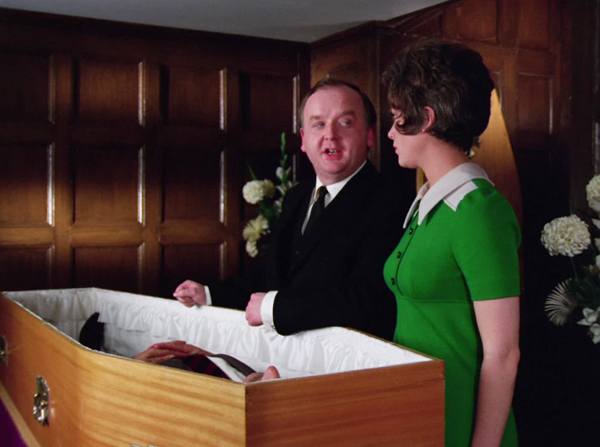 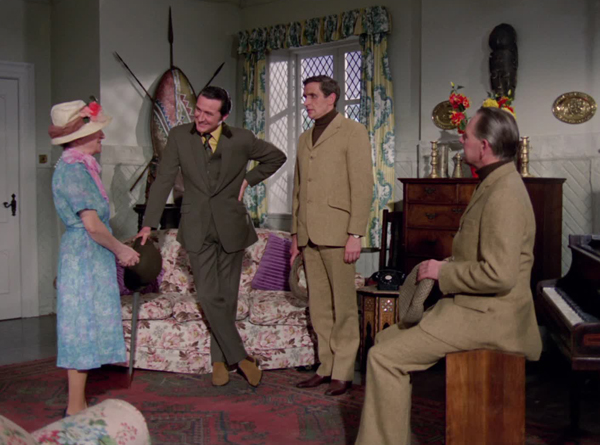 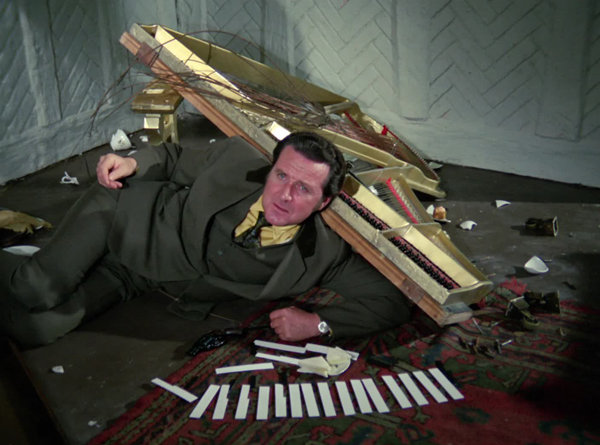 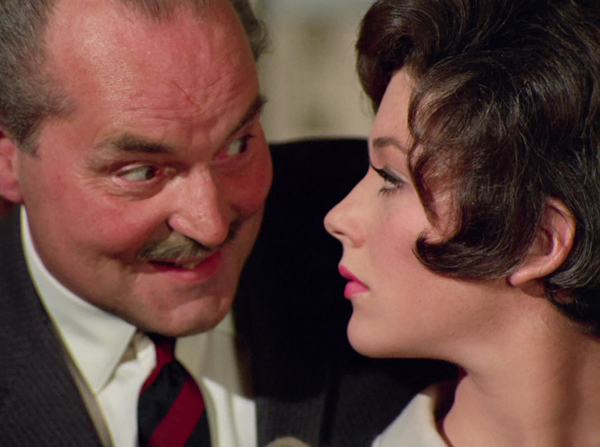