I can’t believe we’re fighting each other, when we should be fighting them.

Oliver Stone won his first of two directing Oscars for Platoon, but it was one of three nominations at the 59thAcademy Awards; dual Best Original Screenplay nods for Platoon and Salvador were also forthcoming (Woody won for Hannah and Her Sisters). Now, I think Salvador’s a fine piece of work, near-peak Stone operating at the height of his powers, and it’s worth remembering that he had previously won in the screenplay category for Midnight Express. However, his writing for Platoon is by some distance the least of its virtues. As Pauline Kael noted, it’s like “a young man’s first autobiographical – and inflated – work” (Stone wrote it a decade before he eventually got to make it, and its earliest form came not long after his tour of duty in Vietnam concluded). At its best, Platoon is visceral and ferociously uncompromising, but its merits are too often diminished by Stone’s would-be poetic lens, casting himself (through Charlie Sheen) as the sensitive, afflicted and conflicted soul who perceives more penetratingly than the rest.

You can see, or rather hear, that most glaringly with the narrational insights of Sheen’s Chris Taylor, writing to his gran – the character ran away to war out of social conscience borne from his privileged get-out-of-call-up-free, thus displeasing his parents – in the most pat philosophising, cod-psychological manner that quickly grates on the nerves. One might charitably see that as Stone writing the less than perspicacious and profound observations of a young man out of his depth. But, alas, I think it’s characteristic of his blunt, head-first posturing elsewhere in his career.

He’s at particular fault in conjuring the warring dualities of good sergeant Elias (Willem Dafoe, test driving his Jesus persona before Scorsese requested the real thing) and “Our Captain Ahab” Barnes (Tom Berenger, utterly fearsome, and sadly probably the last time he’d make a big impression in a movie). Okay, it’s not a subtle choice by Stone, presenting the good and bad sides of conscript behaviour this way, but you can just about go with it, on the basis that the actors (who both received Oscar nominations) are so damn riveting.

What you can’t go with is the meal of a commentary Stone makes of over-explaining what was already over-etched in the first place (“The war is over for me now, but it will always be there the rest of my days, as I’m sure Elias will be, fighting with Barnes for what Rhah called possession of my soul” – Yeesh!)

Kael’s essay on the film – as is generally the case with her reviews, it’s well worth checking out – particularly struck me for her insight into the writer-director’s character: “Elias is supposed to represent true manliness, but if Stone’s other films tell us anything – if this film tells us anything – it’s that he’s temperamentally more on the side of the crazy stud Barnes”. The observation rather reminds me of the tyrannical bombast of James Cameron, making a movie about peace over nuclear Armageddon and love conquering all while chewing out his cast and crew and generally putting them through hell (curiously, the beats charted by Mark Moses’ inept, queasily-beta lieutenant are almost exactly the same as William Hope’s in Cameron’s Nam-in-space sequel of the same year, Aliens).

Todd McCarthy’s review compared and contrasted Platoon with Salvador (as did Kael’s, to an extent), and he noted how, while the former “made many people feel certain realities of the Vietnam War in a way they evidently never had before”, the narration and the score “creates a severe distancing effect and immediately announces this an artistically ambitious film… Indeed, remove the narration and substitute a conventional action film score for this one, and it is guaranteed that Platoon would have won no Oscars, and likely wouldn’t have been nominated for any”. It would have been the superior film for it, though.

The score – cynically? opportunistically? – uses Barber’s Adagio for Strings to milk maximum emotive response and a mournful, moving effect from… well, pretty much every scene, since what was originally a temp track is ladled on like so much syrup. David Lynch had the restraint and empathy to cue it during the climactic moments of release in The Elephant Man, but Stone treats his every scene that way (the most grandstanding being, of course, the Jesus Christ pose of the poster, occurring about forty-five minutes in as Elias is betrayed and killed for his messianic morals; unlike the actual Jesus, though, Stone advocates eye-for-an-eye justice, with doubts wrung out post-the-fact by the medium of narrational equivocation).

And yet, while these points, the ones McCarthy suggests got it the Oscar, are perversely the very ones that mean it should never have been within a shout, Platoon still packs a punch, despite the many imitators it spawned (I also recall the disbelief when a Platoon computer game was announced; Saving Private Ryan was at least saved that).

The explosive mayhem is sudden, abrupt and disorientating, the savage vengeance visited on the village as disturbing as ever it was, and the climactic assault, as battalion headquarters is overrun, carries with it an impressive sense of abject powerlessness and terror. The less underlined, observational elements of platoon life, from the treatment of cherries to the intense weariness that envelops everyone, lend a verisimilitude that goes some way to counter the excesses, even if the extended sequence of Taylor’s initiation into stoner’s paradise suggests Stone really misses all that camaraderie (and, given his subsequent ayahuasca excursions, the trip of it all too).

Besides Dafoe and Berenger, there’s a great weaselly performance from John G McGinley as Sergeant O’Neill (whose self-preservation instincts are almost too good, as evidenced by his final pay off); his association with Stone would last another two decades. Future luminaries Forest Whitaker, Kevin Dillon, Tony Todd and Johnny Depp (in an interpreter role that was heavily cut down) also appear in minor roles. My favourite performance on revisit, though, is probably Keith David’s good-humoured King; it’s probably the most naturalistic work in the movie and by far the funniest.

Sheen, on the other hand, I just couldn’t get to grips with. I think he’s well cast in Stone’s follow up Wall Street (which nevertheless often makes Platoon look restrained in earnestness and penchant for preaching), but he too often comes across as Hollywood royalty playing in a sandbox here, complete with Rambo bandana. Crucially – given he’s called on to supply the narration – he’s unable to make the riper dialogue (“I can’t believe we’re fighting each other, when we should be fighting them”) digestible.

Stone’s Oscar victory speech presented the film’s recognition as a triumph of coming to terms with the conflict (“What you’re saying is that for the first time you really understand what happened over there… and that it should never, ever in our lifetime happen again”). But all that could really be vouched for was that the Academy was as responsive to unconditional emotional manipulation as ever it was, regardless of backdrop.

And yet, for all the wash of Hollywood sentimentalising and myth-making, Platoon doesn’t feel phoney the way Saving Private Ryan does (post-beach). That might partly be down to Stone’s “been there” authenticity, but I suspect it’s more that he’s aspiring to an artistic statement here, in his own clumsy way, whereas Spielberg was simply out for kudos on his never-ending trail for acceptance as an intellectual, a weighty and important filmmaker, to sit alongside his (rightful) garlands as a crowd pleaser. If there had been justice at the Oscars on March 30 1987, it would have been Stone’s Salvador in contention for the top prize, and Platoon would have settled for its brace of technical statuettes. 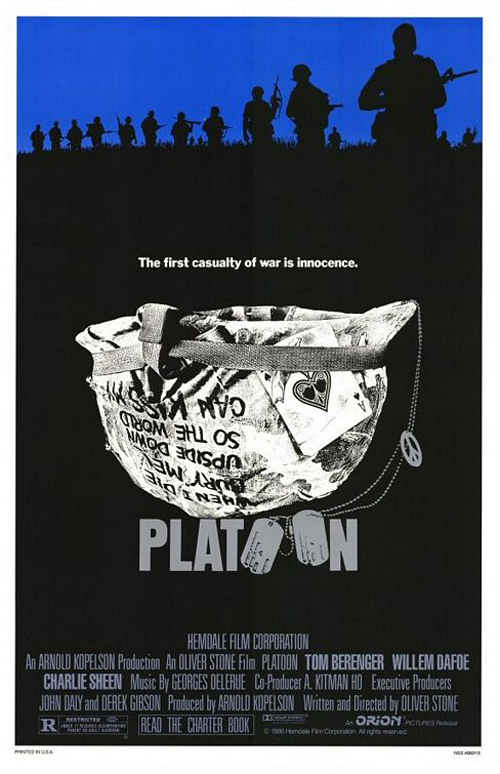 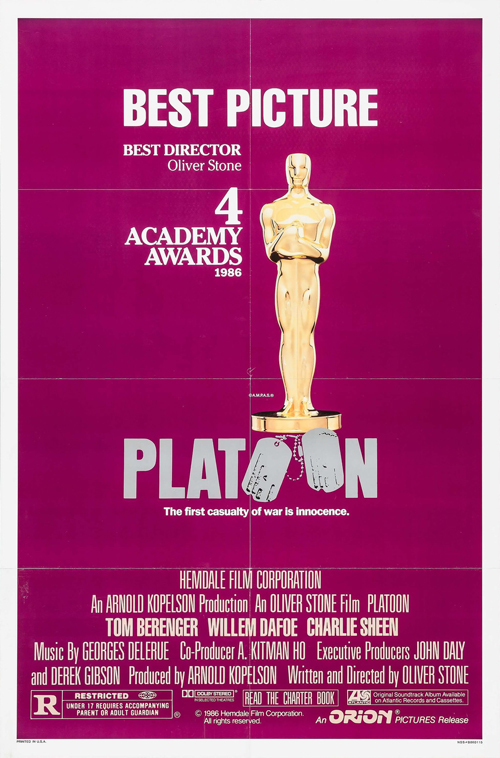