When we have been subtle, then can I kill him?

The Avengers
6.16. Legacy of Death

There’s scarcely any crediting the Terry Nation of Noon-Doomsday as the same Terry Nation who wrote this, let alone the Terry Nation churning out a no-frills Dalek story each season for the latter stages of the Jon Pertwee era. Of course, Nation had started out as a comedy writer (for Hancock), and it may be that the kick up the pants Brian Clemens gave him in response to Noon-Doomsday’s quality loosened a whole load of gags. Admittedly, many of them are well worn, but they come so thick and fast in Legacy of Death, accompanied by an assuredly giddy pace from director Don Chaffey (of Ray Harryhausen’s Jason and the Argonauts) and a fine ensemble of supporting players, that it would be churlish to complain.

Zoltan: I hope, sir, the dagger will bring you all the things my master wished for you.

Where to start with an episode that barely wastes a moment? I suppose a brief nod to the plot would be in order. Nation riffing on Dashiell Hammett is referenced overtly during the final scene with Sidney (Stratford Johns, 1.15: The Frighteners) and Humbert (Ronald Lacey, 5.15: The Joker), themselves doing impressions of Sydney Greenstreet and Peter Lorre in The Maltese Falcon as they set off on the trail of a statuette: “Maltese, I think”.

Here, they’re after an ornate dagger (“The dagger of a thousand deaths”), in the possession of allegedly deceased Henley Farrer (Richard Hurndall, The Five Doctors, Assassin), who appears to cark it during the teaser. Pertaining to the dagger: “Legend has it, the dagger will show where the treasure is hidden”. It’s a very recently-sourced legend, requiring as it does insertion of the weapon into the floor of Farrer’s mansion, Indiana Jones-style, to locate the real treasure, a monstrous pearl that ends up dissolved in a goblet of wine (“Would you care to join me, in the world’s most expensive drink?” asks Steed).

Farrer, faking his death, has sent the dagger to his old enemy Steed. This is on the basis that he knew, when he took possession of the pearl, there’d never be any rest until he was killed for it, so he decided to use Steed to lure the many would-be claimants, so they could be killed (by John Hollis’ butler Zoltan – Zoltan ROCKS!) or kill each other in the process. It’s this process that provides many of the episode’s best laughs, although Nation seems happy to throw in the kitchen sink for a gag if there’s a chance it might work.

Humbert: She must have been a very wonderful woman, Sydney.
Sidney: Who?
Humbert: Your aunt.

He particularly relishes Sidney and Humbert, the latter all gregarious loquacity – think Iain Cuthbertson in The Ribos Operation – and the former all hunchbacked weirdness (Lacey would draw on the general ghoulish demeanour again for Raiders of the Lost Ark). We see Humbert refusing a drink from Steed because he may have to operate later, and asking Sydney, in respect of their softly-softly approach to the Avenger, “When we have been subtle, then can I kill him?” Bodies are mirthfully stacking up in Steed’s apartment by the time they arrive, barely concealed under a rug (“Slattery, Oppenheimer, Gorky. We may have underestimated Steed. He could be dangerous”) with Steed cheerfully unconcerned at their reaction (“Excuse the mess. It’s been a busy evening. Can I get you a drink?”)

Sidney: Clutching the dagger in his hand, he–
Steed: He stabbed her.
Sidney: He puts it on her bedside table.

Sidney’s over-elaborate tale of how he came into possession of the dagger as a child is very amusing, designed to tug on Steed’s heartstrings and reveal its location; its sentimental value is intrinsically linked to his dear aunt, for whom he claims he bought it, but Steed rather reads murderous intent into the story (above).

My guess is that Macnee must have loved filming this one, as he’s provided with so many great lines and interactions. The above is entirely apropos nothing, and a familiar misunderstanding in need of a joke proper, yet it memorably fills otherwise rote scene mechanics.

Gorky: It is, er, poisoned?
Steed: Poisoned? Certainly not. Poison would destroy the bouquet.
Gorky: (smashes four filled glasses in turn) Old Gorky’s enjoying your hospitality.
Steed: I am glad.

The succession of visitors to his flat provides great comic fodder, most notably perhaps Old Gorky (Tutte Lemkow of Marco Polo, The Crusade, The Myth Makers, and like Lacey, Raiders of the Lost Ark), whose habit of smashing every glass of fizz Steed provides, once he has drained it, doesn’t prevent his host from showing the manners to continue offering. Lemkow has a great face for insults – Gorky: Old Gorky makes an ugly enemy; Steed: Frankly, Old Gorky would make an equally ugly friend! – and the back and forth is going so swimmingly, you’re rather disappointed when he’s shot from a crane truck outside.

Oppenheimer: What symptoms did he exhibit before he collapsed?
Steed: Don’t the bullet holes in his coat give you the teensiest clue?
Oppenheimer: Never mind, we can work wonders today. Soon have him up and about.
Steed: This man is dead, Doctor.
Oppenheimer: He will not be alone. Don’t move, I’ve got you covered.

Oppenheimer (Peter Swanwick, most famously the Supervisor in The Prisoner, of course) is next up, posing as Dr Winter but quickly dispatched when he and Slattery (Vic Wise, 1.3: Square Root of Evil), singularly unable to catch any of the peanuts he throws into the air in his mouth, get in each other’s crossfire as Steed opens the front door to the latter at just the right moment.

Further proof Nation is firing on all cylinders is Steed’s parting advice to the real Dr Winter (Michael Bilton, The Massacre, Pyramids of Mars, The Deadly Assassin), who was hit on the head by Oppenheimer: “Now, you get home and see a doctor, doctor”.

Steed: The inferior type of assassin.
Tara: They just don’t make them like they used to.
Steed: The age of the amateur.
Tara: No pride in their craft.

Also of note, attacking Steed on leaving his apartment by the back way with Tara, Cosher Klaus Cussler (Alf Joint) manages to leap from a roof above them and splat himself on the ground below, much to their and later Sidney’s disapproval (“A barbarian, the kind of man who brings the art of murder into disrepute. It’s criminal”).

Ho Lung: It brought death to all who have owned it.
Tara: Then why would anyone want it?
Ho Lung: I have talked enough.

Tara calls on Ho Lung (Leon Thau), who we assume, this being the ’60s, is an egregious case of yellow face, except that it turns out to be a comment on the same when Lung gets on the phone to Baron Von Orlak (Ferdy Mayne) and drops the pidgin English.

Tara’s later chat with Von Orlak (before she receives a dose of Chinese Water Torture) also has Nation – who knows a thing or two about daft plotting – point out the essential ridiculousness of the quest; Von Orlak changes the subject when Tara asks why anyone would want an object that brings death to anyone who has owned it.

Tara: Found something?
Steed: Only that he seems to know a dickens of a lot of people called Dickens.

Another highlight is Steed, attempting to discover who bequeathed him the dagger, visiting Dickens, Dickens, Dickens and Dickens, during which he introduces himself with “Good afternoon. I should like to see Mr Dickens” and is told “Mr Dickens passed away some fifty years ago”. After establishing the two intermediate Dickens are also no longer in the land of the living, he puts in the request “In that case, I should like to have a word with… Mr Dickens” and receives the response “At your service” from Dickens (Kynaston Reeves, 4.23: What the Butler Saw). Alas, Zoltan puts paid to Steed getting a straight answer, and he has to go through the books.

Sidney: We, the interested parties, have formed a consortium. Unity is strength, sir.

The climax doesn’t disappoint either, with Steed and Tara set to work to retrieve the treasure by Sidney and his new associates before events devolve into a full-blown shoot-out that leaves only the Avengers and Sidney and Humbert standing (Steed shoots Farrer).

Steed: I thought you didn’t like parties?
Tara: I don’t, really. That’s why I’m trying to get them all in on one evening.

This is more Steed’s episode than Tara’s, perhaps, but she still has her moments, including a very tidy fancy-dress costume and turning the tables on Sidney, extracting information by tickling him.

Did Nation have problems buying birthday presents for young relatives around this time? In Noon-Doomsday it was an assassin fretting over what to buy his niece, while here, Steed’s flying a toy plane that should have gone to his nephew three years ago. He’s still at it in the coda, until it flies out of the window, and Tara offers him a consolation glass of guess what instead. Legacy of Death is a blinder – you’d never have known Nation had it in him, based on his science-fiction output – and one of the very best of the season, and the series. 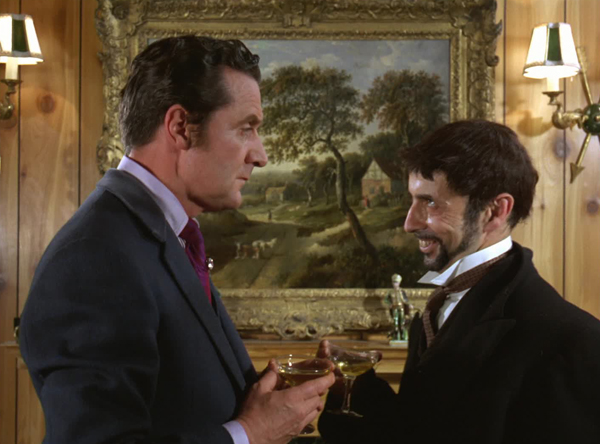 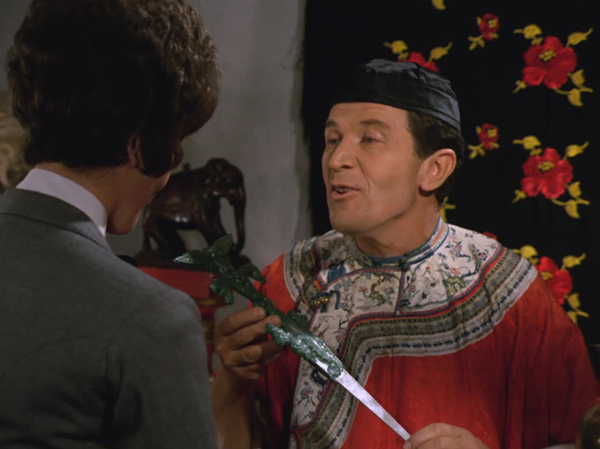 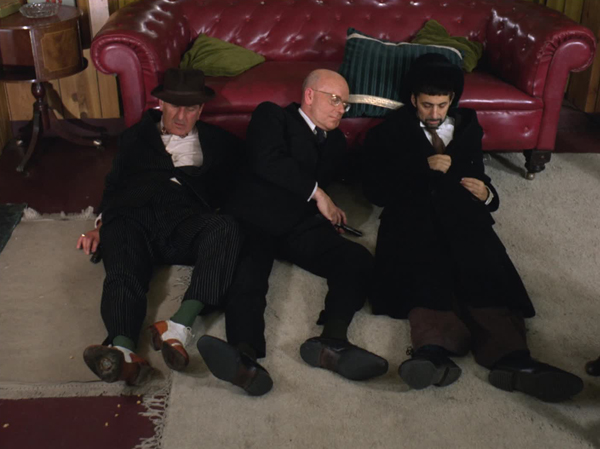 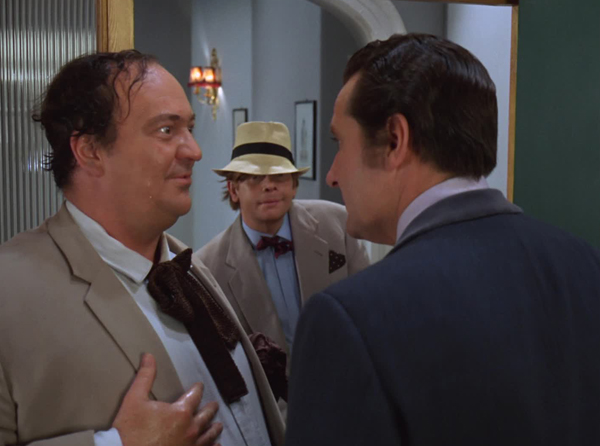 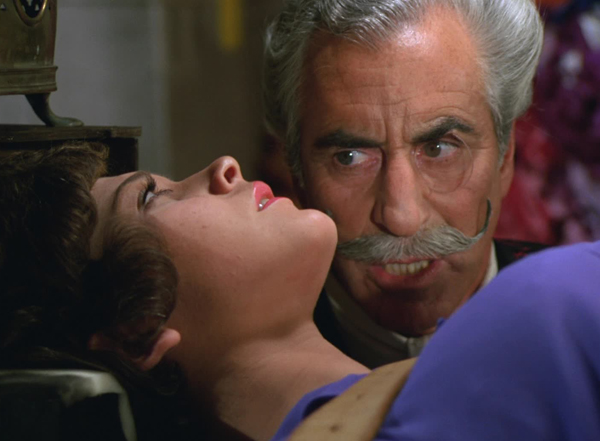 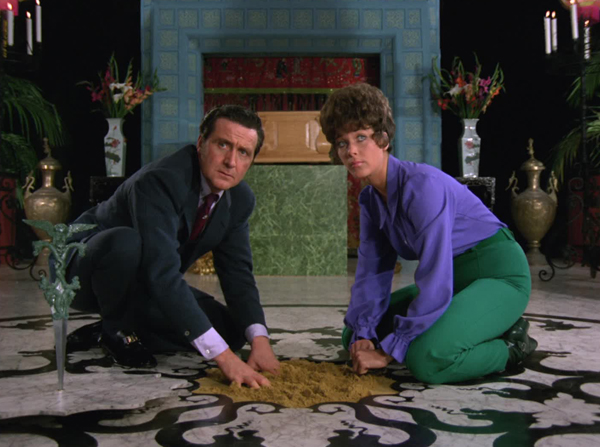 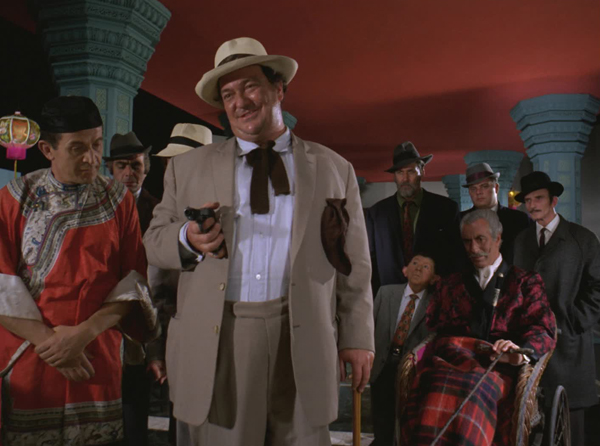 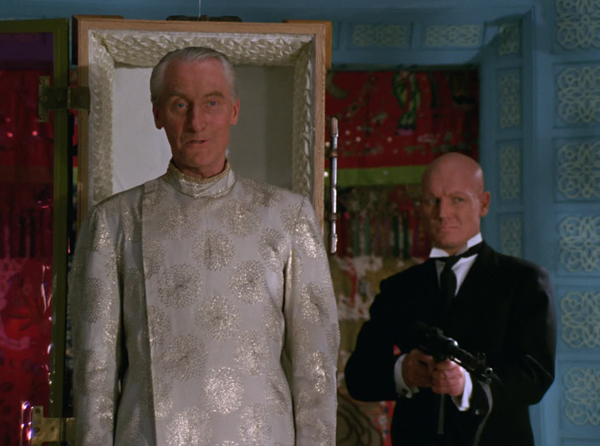