The spoon is safer.

Do you want a Toy Story that’s just entirely serviceable? I mean, that’s what they all are, but Toy Story 4 appears to set out to be precisely that, a collection of already over-familiar series elements dusted down, spruced up and rolled off the conveyer belt with the necessary sheen (and then some), but rarely truly inspired. As such, while there have been occasional longueurs during previous instalments – usually involving a Randy Newman song – this is the first time I’ve felt a certain listlessness coming on.

Obviously, ever since the first one, I’ve been coming at these movies in an ever-so-slightly glass-half-empty capacity, in that while they’re enjoyable, the feeling that they aren’t altogether satisfying in basic premise sticks with me. Toy Story 4 does, I suppose, have some interesting thematic content, if only because it bizarrely turns on its head – betrays even – the very essence of existence these characters have been espousing all this time.

Even in this film, the insurmountable importance and meaning of being a wanted toy is emphasised and emphasised again, this time with the inevitable rejected toy turned villain, complete with flashback (see Toy Story 2 and 3). Here, it’s the Gabby Gabby doll voiced by Christina Hendricks, coming on strong withher Morrisey-like vents-doll minions. However, screenwriters Stephany Folsom and Andrew Stanton bottle it as far as punishment is concerned, allowing the character a happy ending, via one of the movie’s frequent mawkish interludes (the quotient of upset cute kids is much higher here than previously, I suspect more so than the other three films put together).

It seems odd then, that Woody, the ultimate espouser of toys’ essential existential meaning as vassals for their owners’ fantasies, should reject it all for a life of bliss with Bo Peep. Because how can that give him the same sense of fulfilment? We’ve repeatedly been shown such a recourse is not possible for a toy; the metaphor seems to be one of “earthly delights” supplanting religious calling, if you like. Albeit, Woody devoting himself to finding owners for toys at the carnival doesn’t really support the movie’s confused themes, since he’s still ultimately in service of toys finding their own personal “gods”.

Elsewhere, the picture offers a slightly spin on previous perspectives, whereby the toys (mainly Woody), instead of merely devoting themselves to preserving the status quo, indulge themselves nostalgically, looking back on their past achievements with owners in the manner of proud parents. In his Guardian review, Peter Bradshaw suggested of the previous Toy Storys that, rather than being about the fear of obsolescence, they’re about “the parents who fear the moment when their child doesn’t want to play with them anymore” (surely that should be a blessed relief?) Whether or not that’s his projection, it certainly fits with the attitude playing out here.

The spectre of existential purpose also inhabits the supporting characters. While Woody unlearns his life meaning, the owner-fashioned spork learns his, considering himself worthless (trash) until he is taught the value of service to creator Bonnie. The character of Forky is undoubtedly the movie’s highlight, marvellously and eccentrically voiced by the inimitable Tony Hale. He’s consistently the funniest element, albeit possibly not as hilarious as Disney being able to sell Forky toys for tens of pounds/dollars in respect of something composed, as he repeatedly puts it, from trash.

Key and Peele’s inseparable cuddly toys Ducky and Bunny also get big laughs, particularly as a consequence of their Edgar Wright/ Ant-Man what-if scenarios not coming to pass (usually involving revealing their animated inanimate object status to humans). Keanu Reeves occupies the Michael “Ken” Keaton guest spot as Canadian daredevil crap toy Duke Caboom. Like Ken, the character’s amenable and mildly amusing, but possibly not entirely worthy of the time devoted to him.

Generally then, director Josh Cooley (graduating to features) does a solid job with the new faces, but the old very definitely suffer, many of them barely getting a look in. Buzz has his own subplot about listening to his inner voice, but he’s relegated to the side-lines while Woody and his new companions, and romantic subplot, take centre stage.

Of which, the returning Bo Peep (Annie Potts), formerly of limited autonomy and with such little interest devoted to her that she was entirely absent last time, is retconned as a kickass shepherdess driving around in a skunk. It may just be coincidence that the series has, right at the end, become overtly progressive; Woody willingly takes orders from Bo, and her influence is such that she persuades him to forsake his entire raison d’être (earlier too, Woody is seen to be subordinated, as Bonnie Hunt’s Dolly effectively calls the shots amongst Bonnie’s toys).

While this arguably reflects on Woody’s always rather pompous status, it’s also perhaps indicative of Pixar, in the absence of John Lasseter’s unwanted hugs, attempting to redress the series’ (and studio’s) gender balance in less than seamless ways; it’s better to finesse the story beats rather than crowbar them in generically.

The presence of Forky only slightly offsets certain familiar plot mechanisms, since a family road trip rapidly leads to Woody encountering the usual hellish realm – an antique store this time, rather than a day-care centre or a toy collector’s abode or a psycho kid’s room. And it may, in part, be that same familiarity, but it isn’t very compelling this time, the odd breathless chase aside. Woody’s lost voice box isn’t disturbing the way it might have been in an earlier instalment; Cooley merely goes through the motions of a frightening sequence, and Woody isn’t shown to have lost anything vital through the extraction (even if it is equivalent, functionally, to organ trafficking).

The manner of parcelling out the plot is also less lucid than before. On the one hand, this means you aren’t entirely sure which direction the movie might be heading. On the other, it makes it seem piecemeal and uncoordinated. You could legitimately argue the formula – the same elements rearranged in slightly different but still engaging ways – is exactly what makes these movies work, in the manner of Bond or the MCU, but I was never entirely convinced in this case for the need of any repeat go-arounds. In Toy Story 4, it definitely begins to run thin. 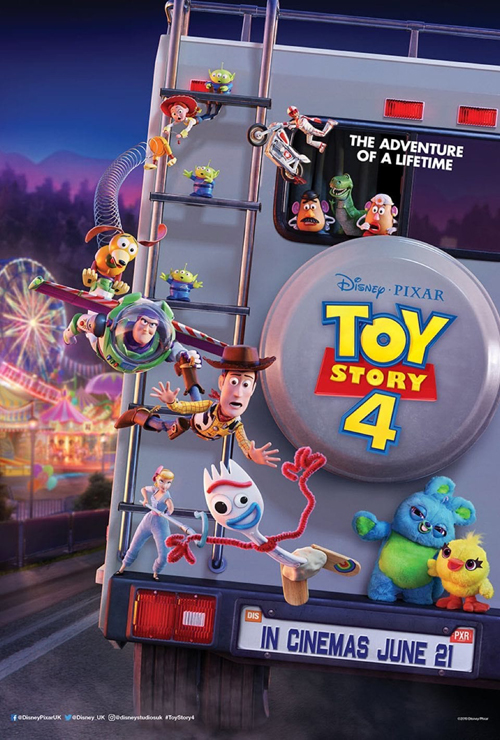