I had that Christopher Marlowe in my boat once.

You see? Sometimes Oscar does get it right. Not that the backlash post-announcement would have you crediting any such thing. No, Saving Private Ryan had the rug unscrupulously pulled from under it by Harvey Weinstein essentially buying Shakespeare in Love’s Best Picture statuette through a lavish promotional campaign. So unfair! It is, of course, nothing of the sort. If the rest of Private Ryan were of similar quality to its opening sequence, the Spielberg camp might have had a reasonable beef, but Shakespeare in Love was simply in another league, first and foremost thanks to a screenplay that sang like no other in recent memory. And secondly thanks to Gwyneth Paltrow, so good and pure, before she showered us with goop.

Saving Private Ryan wasn’t even the best WWII movie nominated for Best Picture that year (The Thin Red Line is another case of a film in a quite different class to Spielberg’s ongoing struggle for acceptance and recognition as a mature and intellectually challenging – rather than challenged – filmmaker).

But still, any discussion of Shakespeare in Love must inevitably come back to robbing Private Ryan, because the $15m Harvey spent categorically means the Oscar was bought. And not just Best Picture Oscar. Gwynie didn’t deserve Best Actress either (it should have gone to Cate for Elizabeth), ignoring how deft and sympathetic her performance is, as a lady playing an actress masquerading as a boy playing Romeo, all the while exuding real passion for the theatre; you completely believe this individual would be Shakespeare’s muse (Blanchett’s performance as E1 is technically flawless, but it instils respect rather than enthusiasm, much like Shekhar Kapur’s film. Which rather makes it the opposite of Judi Dench’s other E1 performance that year, the one that won).

Crucially, she also has great chemistry with Fiennes; it’s the perhaps unsurprisingly rare mark of the truly great romcom that elevates it into the enduring (see also It Happened One Night, Annie Hall and When Harry Met Sally). And indicative of the wonders of movie alchemy that you can imagine all the various contenders for a part and how it would have been different – I seriously doubt Winona would have been much cop, so it scarcely matters that Gwynie denies stealing the script off her desk – but I don’t think there is a superior version of Shakespeare in Love out there in the aether.

Take Fiennes, who was starting out in the movies and made a splash (but tellingly wasn’t nominated for his perf); his subsequent big screen career hasn’t found him wanting for work by any means, but it has been markedly less auspicious than one might have expected. His Will Shakespeare is that one defining role, in a not entirely dissimilar fashion to Richard E Grant as Withnail (albeit with considerably less opportunity to dine out on it).

His take manages to combine both the approach of the classically-trained theatre actor and something more naturalistic and looser; you can’t imagine Daniel Day Lewis or Ralph being as free with the material. Weinstein wanted Ben Affleck over Fiennes, at the last moment, it seems, but Paltrow stood firm (the irony of Affleck, the leading man reduced to a bit part, playing a leading man reduced a bit part, is delicious).

Ned: What is the play, and what is my part?

Not that Affleck deserves brickbats for his performance as Ned Alleyn. Quite the contrary, I’d argue it’s by far the best thing he’s done, showing a swagger and capacity for self-mockery that a subsequent two decades of constipated stiffness has sadly done its best to disavow.

Everyone here is marvellous, though. Geoffrey Rush and his bit with a dog offers up just the right kind of scenery chewing – broad and dodgy and affable – coming off his own Oscar but recognising a great supporting part when he sees one (there was a point, somewhere around the fourth time playing Barbossa, that his performances started to become over familiar). He was rightly nominated for Philip Henslowe, but could as easily have been for Sir Francis Walsingham in Elizabeth (tho’ Henslowe is just plain more fun, and is given many of the best lines: “Strangely enough, it all turns out well”).

Queen Elizabeth: Can a play show us the very truth and nature of love?

Tom Wilkinson excels as financier-turned-theatre-lover Fennyman, fiercely defending the process against any who would impede it. Colin Firth, at that point the Darcy of a generation, relishes the chance to go against type as complete rotter Lord Wessex (for some reason, this appealed to Prince Edward, who dug the title out of mothballs for his wedding).

Judi Dench’s words of wisdom about being a woman in a man’s world sail dangerously close to trite applause-baiting – hence they were prominent in any given awards clip – but she has the flair to pull them off. And Rupert Everett as Kit Marlowe is flawless “star” casting – he was coming off The Madness of King George, and Hollywood raves for My Best Friend’s Wedding – as Will’s older-brother-type peer; I’d loved to have seen a whole movie of his Marlowe.

Woman in Pub: What’s the play about?
Bashford: Well, there’s this nurse…

The impression that the Shakespeare in Love screenplay is mostly down to Tom Stoppard isn’t really dispelled by co-writer Marc Norman’s other credits (Cutthroat Island) or the knowledge that the latter’s best idea – the premise – came from his son. Certainly, Ed Zwick (we dodged a bullet there) didn’t like the original and brought in the playwright (so he got two things right, the second being moving on). That was back when Julia Roberts (we dodged a bullet there) was involved; she wanted Day Lewis, who didn’t care for it. Kate Winslet got cold feet, and then… Gwynie.

Even when John Madden boarded, the ship failed to run smoothly – rather like fellow compatriot Mike Newell, Madden’s a journeyman director whose career has been characterised by patchy projects – with re-editing and reshoots (the ending took some graft to refashion as sufficiently upbeat and inspiring). Stoppard credits the director with upping the romantic ante, though (“I was quite turned on by the humour, the possibilities of making theatre jokes. I had a great time writing it, but I think without John it wouldn’t have been what it was. He got that the film was really driven by its love story”). Of course, Madden didn’t go home with one of the picture’s seven Oscars (that was Spielberg, natch).

The result is a double whammy, a film that’s not only funny but clever with it, stuffed with verbal and visual gags referencing Shakey’s plays as inspirations and inspired-bys; he notably gets his from Marlowe (the plot) or from Ned (the truncated title), while young John Webster (Joe Roberts), later of gore-drenched plays, does his best to ensure things don’t turn out well for anyone.

It was suggested at the time that Stoppard had sacked No Bed for Bacon for inspiration, but that seems a rather disingenuous interpretation (he’d read it, but the idea was still Norman’s, and there isn’t a whiff of Bacon in the movie; come to that, there’s no suggestion Shakespeare was actually St Germain either). True, the threads are resolved by a Regina ex Machina (“Tell Master Shakespeare something more cheerful next time, for Twelfth Night”). And the historicity is optimistic – Viola is walking the boards about seventy years before women were allowed, so she wasn’t starting any trends – but the picture manages that supremely difficult feat of taking leave of a doomed romance in a manner that’s both wistful and hopeful (and if that’s partly down to Harvey’s influence, well, stopped clocks and all that).

Oh, and the score is gorgeous, providing inherent uplift while driving the narrative forward; as much as anything can be said to sprinkle magic fairy dust on Shakespeare in Love, it’s composer Stephen Warbeck’s contribution of a supremely romantic accompaniment. The imagined Viola, walking a stretch of beach at the start of Twelfth Night, turns a sad ending into a triumph.

It isn’t uncommon for Hollywood to favour features about the business when it comes to awards time (in the years since, The Artist, Argo and Birdman have all gone there), but it’s very rare to have one like this, written to within an inch of its life. There isn’t an original screenplay Oscar winner since that comes close (and you’re only really looking at Woody Allen and Quentin Tarantino as contenders in the two decades prior). It’s about time to cease daubing Saving Private Ryan’s shitty stick over the film. Shakespeare in Love is, simply, a classic of the genre. The right film won. 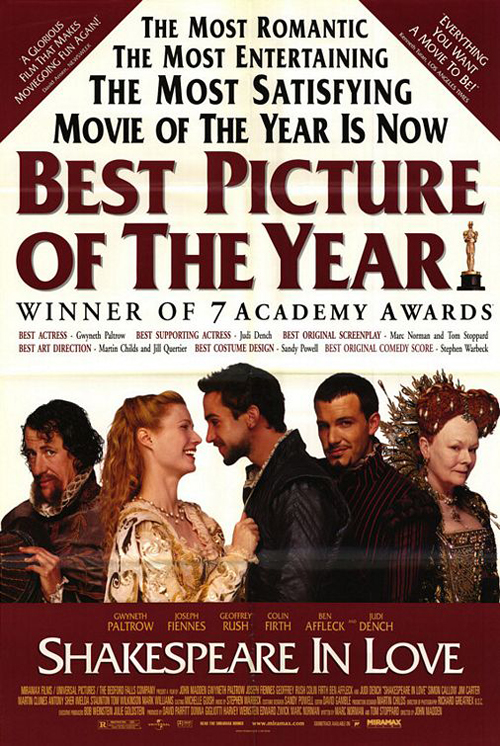