Moonstruck has the dubious honour of making it to the ninth spot in Premiere magazine’s 2006 list of the 20 Most Overrated Movies of all Time. There are certainly some valid entries (Number One is, however, absurd), but I’m not sure that, despite its box-office success and Oscar recognition, the picture has a sufficient profile to be labelled with that adjective. It’s a likeable, lightweight romantic comedy that can boast idiosyncratic casting in a key role, but it simply doesn’t endure quotably or as a classic couple matchup the way the titans of the genre (Annie Hall, When Harry Met Sally) do. Even its magical motif is rather feeble.

Which is – and I had to recheck, so lacking in import is it – that the characters’ romantic entanglements are brought on/exemplified by the occurrence of a particularly large, bright moon, very similar to the one that accompanied the courting of Loretta Castorini’s (Cher) parents (Olympia Dukakis as Rose and Vincent Gardenia as Cosmo). Loretta, engaged to Danny Aiello’s Johnny Cammareri, falls for his much younger, one-handed brother Ronny (Cage). Meanwhile, Rose gets wise to Cosmo’s philandering and indulges an innocent flirtation with John Mahoney’s college professor Perry, a serial-dater of his much-too-young students, who inevitably dump him (invariably by throwing a drink over him).

When Cage isn’t on screen, the proceedings are quite low-key, revelling in screenwriter John Patrick Shanley’s observations of the New York Italian community/family. Indeed, while there are stories of the stresses director Norman Jewison underwent getting the final breakfast scene right, one mostly comes away with a sense of the proceedings being too affable and relaxed, with insufficient zip to leave more than a mildly pleasant aftertaste. There is, of course, room for that, and it’s probably exactly that inoffensively amenable quality that found such a receptive audience (let’s not forget, the biggest movie of the year was the offensively inoffensive Three Men and a Baby).

Cher is pitch-perfect in the lead role; this was her peak year, acting-wise (a trio of roles), topped off by an Oscar, and I think it’s fair to say, aside from a pre-nose job supporting turn in Silkwood, it’s her best performance. Certainly her most winning one, one in which she shows an easy, unflappable comic timing as she’s confronted by the foolish, vain men in her life. Dukakis is very nearly as impressive (why, she even won Best Supporting Actress over the awesome Anne Ramsey in Throw Momma from the Train). Rose is wryly no-nonsense about her husband’s pursuits and allowed free range in an unguarded dinner conversation with Mahoney (a late transition to acting, he was in his mid-forties before he started attracting attention on the big screen).

There is, it has to be said, a cumulative knock-on to enlightened man Shanley writing these wise, world-weary female characters, despairing of the overgrown men-children in their lives (“You’re a little boy and you like to be bad” Rose tells Perry at one point). Premiere’s big beef with Moonstruck was precisely this: “what makes this movie less than the intoxicating meditation on romance that many have dubbed it is the men in their lives – childish, selfish, ridiculously neurotic”. I wouldn’t go nearly as far as labelling Moonstruck a miss, but it is diminished somewhat by this essential imbalance.

It helps, however, that Cage, Aiello, Gardenia and Mahoney service their neurotics with considerable verve. Aiello, like Mahoney a late comer to movies and only becoming a fixture in the wake of this and Radio Days (Do the Right Thing, Jacob’s Ladder, and of course Hudson Hawk would follow), is the less-than-romantic mother’s boy who has to be told by Loretta to get on one knee to propose (“It’s a new suit” he complains).

He’s also blamed by brother Ronny for the latter losing his hand in a bakery accident, after which Ronny’s fiancé left him; Ronny’s a seething mass of misbegotten clichés, not remotely a character, so it needs someone as wired as Cage to knead him into larger-than-life form. His speech about the loss of his hand is the most famous thing about Moonstruck, and it’s all Cage, the actor parading body language inspired by Rudolf Klein-Rogge in Metropolis. Later, he takes Loretta to the opera, purely because it’s recognised shorthand for possessing a profound soul and bottomless emotional depths (and, inevitably, Loretta weeps).

Ronny’s quickly tamed by Loretta, though, following a dose of cod-psychology in which she tells him he bit off his own hand (“You can’t see what you are and I see you, guy. You are a wolf”). And in response, he carries her to bed. The seventeen-year age gap between Cher – who insisted on the actor – and Cage doesn’t seem like a thing because Ronny bears no resemblance to your average 23-year-old. And because Cher, even playing greying, could be ten years younger than she is (Loretta’s only four younger).

Cage’s physicality here is curious too, more closely resembling a young Stallone in his sloppy earnestness than the likes of the cool, hyper-styled drawl of Wild at Heart or the Looney Tunes whackiness of HI in Raising Arizona. In those early scenes, he brings a crazy energy to Ronny, and accordingly can’t help but infect anything in the vicinity (look at Peggy Sue Got Married for further evidence of this knack); he’s like Crispin Glover but with box-office cachet. By the time of the final breakfast scene, though, Ronny has been thoroughly normalised, the wolf tamed, rather diluting what made the film such an intriguing prospect.

Uber critic Pauline Kael applauded the picture, with the caveat that it was “at times… a little too proud of its quaintness”; I’d suggest it’s too slight and innocuous, and self-consciously cute with the Italianate embroidery, to deserve the artful “rose-tinted black comedy” tag she awards it. Jewison and Shanley (who took home the Best Original Screenplay Oscar) don’t do enough to make you want Loretta and Ronny to get together (other than making it clear Johnny isn’t right for her, so Ronny’s the one, by deflection rather than worthiness).

Which means, ultimately, it’s a romcom by theme and association, rather than one engaging with the fates of its main characters in a manner with which the audience can sufficiently empathise (Johnny is, essentially, a cypher, his thoughts only engaged with via Loretta). Moonstruck’s a nice movie, but an inessential movie, such that it’s a prime example of one where you have to be prodded to recall it actually was a Best Picture contender. 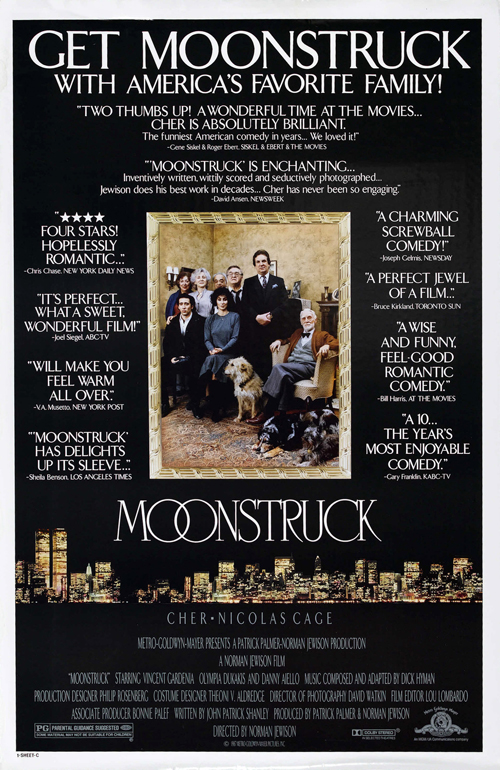 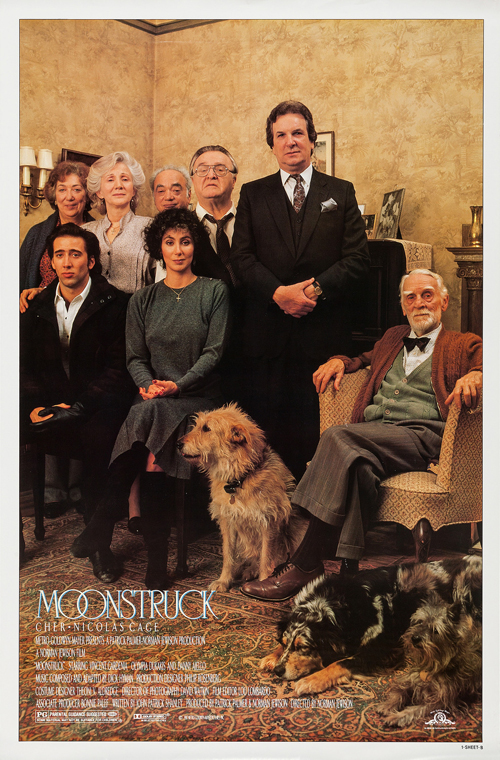