Don’t care much for Berlin, sir. You’re liable to get your head shot off.

A serviceable follow-up to The Ipcress File, but conclusive evidence that it wasn’t Michael Caine’s insolent performance as Harry Palmer alone – “You really work on the insubordinate bit, don’t you?” – that made it special. With Sydney J Furie conspicuously absent (Harry Salzman very much did not ask him to return), the directorial reins were passed to reliable go-to-Guy Hamilton (Goldfinger). While Otto Heller returns as cinematographer, painting a suitably drab, austere Berlin, Bond editor Peter Hunt is absent, and so is the indelible score (Konrad Efers replaces John Barry). Gone too are the pep and verve. This could be any old Cold War spy movie, but with a pair of spectacles and an occasional quip.

Stok: As usual, there is no milk today.
Palmer: And so Russian tea was invented.

Which makes for a movie with a great title but a studious sense of “That’ll do”, right down to a screenplay (Evan Jones, later of the very good Wake in Fright, adapting Len Deighton) that can’t quite marry its two plotlines satisfyingly. Which is because they’re entirely separate. Ostensibly, Palmer is sent to Berlin to organise the defection of Soviet intelligence officer Colonel Stok (an ebullient Oscar Homolka, who would reappear in Billion Dollar Brain), with the assistance of local intelligence asset Johnny Vulkan (Paul Hubschmid). Palmer isn’t having any of it, doesn’t for a moment believe Stok really plans to defect, but is obliged to go along with the chicanery. It’s a plot thread resolved with half an hour to spare, the fake funeral of the title revealing Stok’s actual objective (Gunter Meisner’s Kreutzman, mastermind of numerous escapes over the Berlin Wall).

Hallam: Give my love to Berlin. I was there with Monty in ’45.
Palmer: So that’s why the Germans surrendered.

The only link between them is facilitator Vulkan, whom the Israelis don’t know they’re after and who wants his ID documents – those of Paul Louis Broum, his original identity – in order to lay his lands on Nazi loot secreted in a Swiss account. The connection’s too tenuous to prevent the picture from feeling awkward in switching focus. Stok is an entertaining character, but is ultimately something of a digression, one who has no consequences for the third act.

And if that third act finds Palmer being a “shrewd little cockney”, the climax at the Wall – complete with rather desperate switched-coat routine – is less interesting than his confrontation with Vulkan, deciding to release him, or the pathetic attempt by Hallam (Hugh Burden) to divest him of the Broum documents.

Palmer: I’m not killing anybody in cold blood.
Ross: Then provoke him, if that’s going to satisfy your scruples.

Pauline Kael suggested Palmer is “supposed to gain new humanity when he sees the Israeli agents really believe in principles”, with the consequence of the loss of his indifference to the larger stakes; “improve his character and you take away the only character he had”. I’m not sure I’m on board with this reading, as it would mean Harry was planning to deliver them Vulcan when he clearly was not; that the Israelis leave with a body merely turns out to be providential for Palmer, since he has no desire to get his hands bloody for anyone else’s principles. And his respect for the Israelis is based on the degree to which he fancies their alluring agent (asked if he is anti-Semitic when he hears about her Israel-based other half, he replies “only anti-husband”). As he says to Vulkan, “I’m not a judge at a war crimes trial. I don’t want to know about it and I don’t want to kill you”.

If anything, his “new humanity” is evidenced by turning Ross down when he finally offers him that loan for a new car (“No thank you, sir. I’ll walk”), but that seems consistent with a character who wishes to retain his relative independence (taking the loan at this point would qualify as tacit gratitude towards Ross and agreement with Vulcan/Broum’s fate).

Palmer: Don’t care much for Berlin, sir. You’re liable to get your head shot off.
Ross: That’s what you’re paid for, isn’t it, Palmer?
Palmer: Yes, sir.

It’s telling that the most vibrant scenes are, once again, those between Palmer and Guy Doleman’s Colonel Ross (“I’ve read your T-105, Palmer. Entertaining, but slightly pornographic”), keen to remind his indifferent artisan that his job is to be expendable. Hamilton (or more probably Heller) throws in the occasional Dutch angle to remind us of the picture’s stylish predecessor, but it’s mainly left to Caine to carry a picture that would otherwise be content to descend into a fairly ambivalent stodge.

Of the daring escape by a musician across the wall in the opening scene, he is a scathing critic (“Escape? They probably paid him to leave”). He protests at his fake identity (“I’m sorry, I just don’t feel like an Edmund Dorf”) and produces a nice turn of phrase when summarising Stok’s behaviour (“I’ll tell them you talk well, and lie badly”). There’s also a streak of unobtrusive backstory, whereby Vulkan was involved in Palmer’s black-marketeering, while police contact Reinhardt (Thomas Holtzmann) despairs of Harry continually coming to him, asking if old crony safe crackers and forgers are still in business (“So crooked, they had to put you in intelligence”).

Funeral in Berlin isn’t a bad movie, but aside from its star, by far its best feature is its title. Where Bond gradually built towards his finest hour (or near to it) with Goldfinger, Harry hit the ground running and so the only way was down. The picture isn’t so much lethargic as ambivalent, failing to find sufficient reason for you to invest in the proceedings and reliant on you rating his last escapade sufficiently to go with the flow. 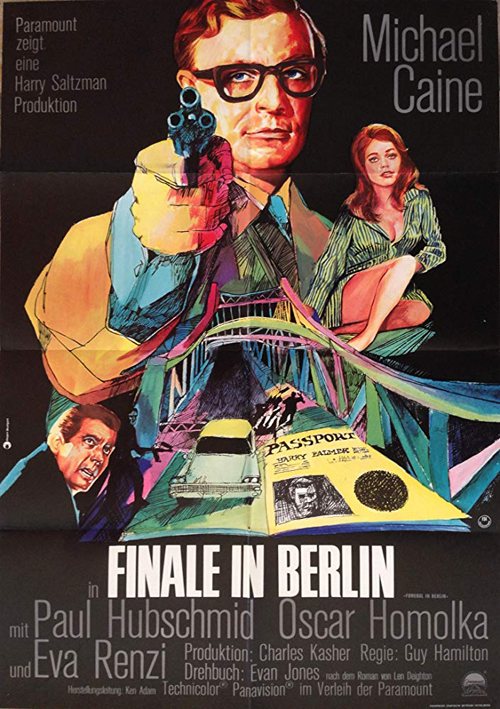