You draw with a good hand.

The Dark Tower was released only five weeks before It’s stratospheric success had every studio scrabbling around for any Stephen King property they could get their hands on, in the hope of landing a similar goldmine. But even during the ’80s, the heyday of King adaptations, box office was very variable, as was quality, and as the recent Pet Sematary remake has shown, there’s every reason to believe It (and it’s second chapter) will remain an exception rather than a new rule. The Dark Tower’s prospects certainly wouldn’t have been helped had it been released in its wake; a misbegotten disaster that had been through so many variations and versions before it finally limped to the screen, it stood no chance of retaining whatever essentials were needed as an introduction to the author’s epic series.

Ron Howard and Akiva “kiss of death” Goldsman had been persevering with a planned movie trilogy and alternating seasons of a TV series since the beginning of the decade (JJ Abrams had the rights prior to that, back when everyone including King still loved Lost). Little Ronnie planned to direct the (first) movie at one point. While that was talked up a lot, it’s entirely understandable that Universal ultimately baulked at such an untested proposition (despite the oft-cited qualitative blurring of the mediums of late, it’s highly doubtful that you can rely on interconnected audience support in the manner envisioned). They debated going in with another studio for cost reasons before giving the go-ahead to a lower-budget version; that floundered, Universal exited, Warner Bros circled it, and then Sony took it on, also with a manageable budget but with Howard now only producing and no commitment to subsequent instalments.

Some fans got bees in their bonnets about Idris Elba’s casting as Roland Deschain (previously pegged as very white, even in the face of King’s too-late renta-quote attempts to salvage the subject for those convinced the project was botched). It served to provide a distraction, for a spell at least, from whether the movie would be getting the world-building essentials right; alas, it was clear from the first trailer, with its CGI-assisted gunfighting, as if this was a movie made in the wake of The Matrix rather than almost two decades on, that it wouldn’t.

I can’t speak as a King enthusiast, but it strikes me that, in general terms, if you’re creating a self-consciously mythological canvas of easily identifiable distillations of good vs evil, a key ingredient is going to be a tangible atmosphere and flavour, capturing and captivating the viewer with a distinctive environment or realm. Audiences aren’t going to need any cajoling to understand the broad strokes (they’re pretty evident from the posters), so the key is how this particular iteration stands out from the crowd, from any other ineffectual YA offering – which this essentially is, with a kid as the protagonist – that never led to a series (The Mortal Instruments, The Giver, The Dark is Rising, The Vampire’s Assistant, etc). And with its colour-washed, forgettably apocalyptic Mid-World, The Dark Tower entirely fails in this task. There’s nothing tantalising about this world; its pieces should be mysterious and elusive the way Lost’s were, but it’s nothing.

As noted, it doesn’t help that our way into all this is via a junior lead. Combined with the crossing-between-worlds element, memories of Last Action Hero soon beckon (which, I hasten to add, is a far superior movie overall, despite its abundant flaws). At least The Dark Tower has a less irritating young lead in Tom Taylor, but the flip side is that he’s utterly vanilla.

In theory, his pursuit by agents of Matthew McConaughey’s Man in Black ought to spin a paranoid, fearful real world, but director Nikolaj Arcel’s depictions of NYC and Mid-World are so undifferentiated and Rasmus Videbæk’s cinematography so monochrome that very little is noteworthy. The visuals aren’t bad, but they aren’t remotely evocative either, and there’s no time for the material to breathe, for the picture to ground itself, pace itself or build.

There are suggestions of HP Lovecraft in the uncomforting universe beyond, the one the Dark Tower provides protection from (“outside is endless darkness, full of demons trying to get to us”), and connotations of MKUltra in the abduction of psychic children (complete with reference to their, and Taylor’s ability to “shine”), but these more pathological elements take a back seat to the decidedly anodyne confrontation between opposing elemental forces.

I’ve seen criticism that McConaughey is off the scale here, but I rather wish he’d been more so, since the picture is otherwise desperately lacking personality. Elba is predictably grim-faced and dour; like so many of his Hollywood outings, he seems to be searching for a reason to be there. That doesn’t seem to have been modified any in the forthcoming Hobbs and Shaw.

Occasionally, there’s a glimpse of nimble nastiness (“Now kill each other” the Man in Black instructs the social services minions who have failed him; later, he orders Taylor’s step father to stop breathing). Mostly, though, was reminded of similarly lethargic franchise properties struggling to the screen without any great enthusiasm; the “we need to capitalise on it approach” to the recent Tomb Raider, for example, and the lack of creative spark that sunk Chris Weiss’ The Golden Compass, another yielding no follow-ups.

Because Amazon has already snapped up the rights to a Dark Tower TV adaptation, recasting the main roles (Sam Strike and Jasper Pääkkönen as Roland and The Man in Black respectively) and intending to set it alongside their Lord of the Rings series as a reason, other than the free postage, to subscribe to Prime. That’s a rare fast turnaround, and an indication that, in the current free-for-all environment, ill-advised adaptations or reboots don’t subsequently have to lie dormant for a decade before getting another look (the rights holders of Hellboy will doubtless be overjoyed). 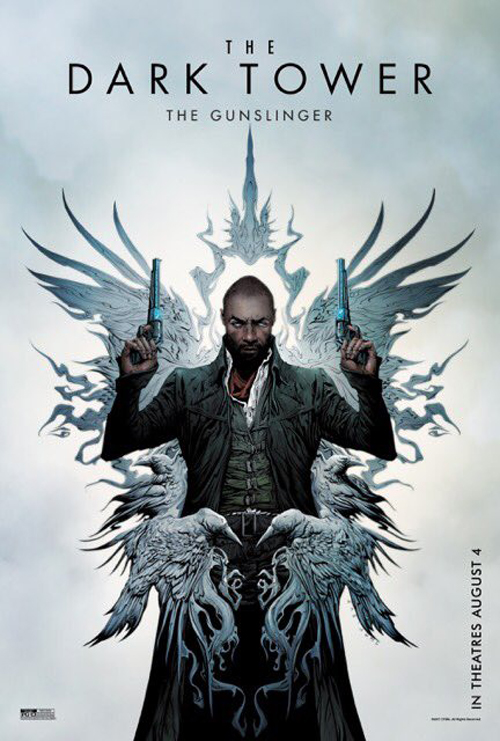