Early on in Rocketman, there’s a scene where publisher Dick James (Stephen Graham) listens to a selection of his prospective talent’s songs and proceeds to label them utter shite (but signs him up anyway). It’s a view with which I have a degree of sympathy. I like maybe a handful of Elton John’s tunes, so in theory, I should be something of a lost cause with regard to this musical biopic. But Rocketman isn’t reliant on the audience sitting back and gorging on naturalistic performances of the hits in the way Bohemian Rhapsody is; Dexter Fletcher fully embraces the musical theatre aspect of the form, delivering a so-so familiar story with choreographic gusto and entirely appropriate flamboyance, in a manner that largely compensates. Largely.

Astute casting also more than pays dividends, as Taron Egerton graduates from his previous biopic collaboration with Fletcher – the cheerfully undemanding Eddie the Eagle – with endlessly brimming confidence, both in physical and vocal performance (unlike Rami Malek, these pipes are all Egerton’s). Sure, he’s significantly more photogenic and likeable than actual Elton (and at no point appears to have piled on enough pounds to be convincing when he labels himself fat), but captures the egotistical, indulgent, temperamental artist with both the necessary flair and despair.

Jamie Bell, who may actually be the better singer of the two, despite playing a character who professes to be tone deaf, plays the contrastingly angelic Bernie Taupin, always professing brotherly affection and showing it by being there for him in rehab, having suffering through the tantrums and occasionally expressing doubt about the tastefulness of the tiaras.

Richard Madden is at the other end of the scale, coming on like a gay Sean Connery as the manipulative, coldly calculating John Reid (I can definitely see the reason for all the Bond talk now, having previously skimped on The Bodyguard and been unconvinced by his Game of Thrones turn). Similarly strong are Bryce Dallas Howard (just when did she become eligible for the mum parts?) and Stephen Mackintosh as his respectively capitalising and distant parents (Gemma Jones is his unstintingly encouraging gran).

So while there’s nothing to complain about on that front… Although, perhaps appropriately, or not given the director, the young Eltons display a sub-Bugsy Malone flair during early song-and-dance routines. The screenplay, however, comes from Lee Hall, previously of Billy Elliot – you can see the genetic makeup in the early life – and adaptations including Pride and Prejudice, War Horse and the upcoming Cats, and it is less unimpeachable.

It may simply be that Elton’s life, unlike his frocks, isn’t sufficiently cinematic, not so much in terms of eventfulness, perhaps, but with regard to that all-important dramatic arc. Certainly, the lack of delineation after a certain point – subsequent to his rise to the top, when he can’t go any higher – leads to an unfiltered melange of excess and injury, with Elton haunted by familial rejections and injustices to the point of weary repetition (how many times does he need to see his younger self, or have his parents remind him that he isn’t wanted – cue wounded look).

It might also have helped to pin down the periods a little more; I know this a loose fantasy-musical version, and I’m sure the heady days all car-crashed into one for enervated Elton, but what appears to be a thirteen-year period following hitting it big at the Troubadour in 1970 has little to separate and define itself.

There are some great visuals put to songs, most notably Elton and the audience collectively rising off the ground at the inaugural aforementioned Troubadour gig (’72’s Crocodile Rock being his first performance) and a genius piece where Reg Dwight has a heart attack and is gurneyed into a suit via a silhouetted production-line, culminating in his launching into Pinball Wizard for a rapt audience. Then there’s Elton’s triumphant rebirth with I’m Still Standing, deliriously recreating (or inserting Egerton onto the original footage?) the cheese-encrusted ’80s promo.

Along the way, we witness management fallouts – Dick James comes off looking hard done by; from the evidence here, it seems incredible that Reid continued as Elton’s manager until 1998 – and attempts to reconcile and be disappointed by his parents, a very brief marriage, and Kiki Dee. We also learn that the Queen Mom was a big fan. Which, I guess, would make sense if her daughter had indeed “chipped” Elton (ask Donald Marshall).

As a whole, Fletcher plotted the surest course in summoning the spirit of Ken Russell-era musical biopics, but whereas I found Bohemian Rhapsody struggled somewhat to find its feet before clicking in the second half, tantamount to the reverse is true here. Rocketman is in danger of succumbing to the same kind of self-indulgence Elton did during the period depicted (which again, you could argue is entirely the point, but it’s debatable whether that makes for the greatest version of his life story). 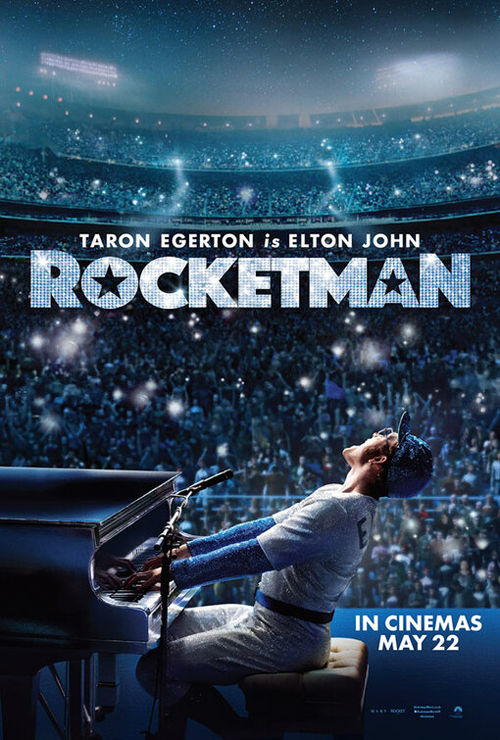 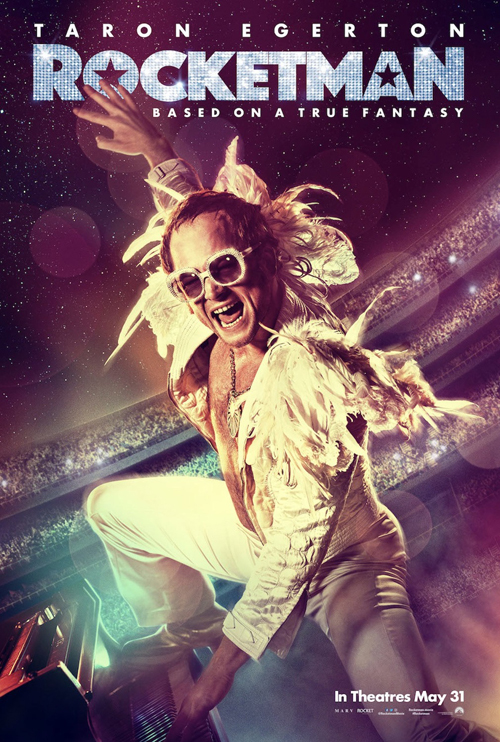