No time to dilly-dally, Mr Wick.

At one point during John Wick: Chapter 3 – Parabellum, our eponymous hero announces he needs “Guns, lots of guns” in a knowing nod to Keanu Reeves’ other non-Bill & Ted franchise. It’s a cute moment, but it also points to the manner in which the picture, enormous fun as it undoubtedly is, is a slight step down for a franchise previously determined to outdo itself, giving way instead to something more self-conscious, less urgent and slightly fractured.

It isn’t necessarily a bad thing that Parabellum doesn’t barrel along at break-neck speed throughout – it’s generally essential for a movie of this sort to pause for breath periodically, in order to maintain pacing – but Chapter 2 appeared to be setting up a relentless onslaught on Wick once the bounty fell on his head in its closing minutes. You only have to check out the promotional poster at the bottom of the page to encapsulate the expectations for Chapter 3. But that side is over (or feels like it) almost as soon as it begins when John takes flight to Casablanca.

What is a bad thing is some of the plot expediencies that result from his high-tailing it. While the punishments meted by the Adjudicator (a show-stealing Asia Kate Dillon, so coolly self-confident, she could have actually stepped from The Matrix) add to the sense of escalation in the first instance, of the furies bringing order to the chaos that follows in John’s wake, there’s also an unwelcome side order of pulled punches as his helpers receive sentence. Not unlike the ones in some of the more frenetic fight scenes, as Keanu occasionally stumbles through his paces or a performer waits to be pummelled.

If you shy from dispensing ultimate justice on everyone (Ian McShane’s Winston, Laurence Fishburne’s Bowery King, Anjelica Huston’s Director) it inevitably makes the ruling hierarchy that is the High Table look like they aren’t up to much when it comes to running a ruthless ship. More damagingly, in terms of the dramatic integrity of the series, it also means the stakes can only rise so high.

This, ultimately, is Chapter 3’s biggest stumble. Having backed John into a marvellously oppressive corner at the end of Chapter 2, Derek Kolstad and his four co-writers find their only recourse is to backtrack, and they do so with an almost risible lack of finesse. John’s escape from New York, calling in a favour from his one-time protector, is fine, but his subsequent meeting with the Elder (Saïd Taghmaoui) is tenuous in the extreme; there’s no sense of why this guy should be so impressive and preeminent. Indeed, he straightaway looks a bit of a chump with appalling judgement by so readily offering John a get-out.

Added to that, John’s desire to live, so that he may remember his wife, is… well, pretty unconvincing for a self-announced repentant hitman. It’s thus laughable that, having promised his service, subtracted a digit and returned to dispense with Winston, he reneges in the space of a minute of conversation. That we never expected otherwise only makes the scenario weaker still.

There’s also a slight energetic stumble during the Casablanca interlude that comes with Halle Berry’s undernourished and overwrought badass turn. To make an impact in this kind of movie, you need to be able to do a lot with a little, never Berry’s forte (as Storm hitherto evidenced). The result is that, instead of the sequence showcasing her (and her hounds) outcooling Keanu, it quickly establishes itself as the hyper-violent equivalent of treading water (it’s here that some critics’ complaints concerning action fatigue came to mind).

Going back to my initial comments regarding the need to take the pedal off the metal in action movie occasionally, so as to then step on it again once more, there’s also perhaps an issue that arises here, that Chapter 3 maybe takes too much pressure off, such that it can’t quite regain the requisite intensity. John gets to meet a ridiculously French Jerome Flynn and tramp across a desert. He then has too much leeway in returning to NY, where, having previously teamed with Halle, he now teams with Winston and Charon (Lance Reddick). Against whom, besides Mark Dascascos’ lead assassin Zero and his band (his services secured by the Adjudicator), there’s a conspicuous absence of oncoming hoards after that bounty on John.

That said, if you can get through the slightly rocky desert patch, the rest of Chapter 3 is a blast. Dacascos is having enormous fun as a killer who (in the height of hubris) believes himself an equal to John. Of whom he is also an unabashedly huge fan. I don’t think I’ve seen the actor in anything since Brotherhood of the Wolf nearly twenty years ago, and while he’s had some notable TV work since, he’s evidently gleefully seizing the chance to make his mark in a high-profile blockbuster.

Stahelski and his team stage the action with suitable rigour and humour – the absurd quotient of head shots, either by bullet or blade, fast becomes giddy – and set pieces include horses and motorbikes, a battle with giant assassin Ernest (Boban Marjanovic) in a library, and the climactic assault on The Continental, in which an added problem for those defending it is the nigh-invulnerable body armour of the attacking force. There are nice little moments throughout, such as both John and his opponent running out of ammunition and struggling to reload at the same time, and the doctor (Randall Duk Kim) who tends John requesting to be shot (twice) so it looks as if he was forced to aid him.

But Chapter 3’s conclusion of  lacks sophistication, banking on a Chapter 4 in much the same way Chapter 2 did on Parabellum, rather than signifying any sort of plateau or pause for breath. That the Adjudicator even needed to look in the alley suggests she’s not fit for her position (of course Winston wasn’t going to fatally shoot John), and one has to wonder what exactly John’s expressed beef is? After all, he’s repeatedly broken binding agreements and been given second chances; he can’t exactly argue he’s hard-done by, but that seems to be exactly his position. Not that I’m not on his side, naturally, but he doesn’t have a leg to stand on in terms of any assassin’s code.

So John and the Bowery King, doubtless aided by The Continental, will being gunning for the High Table next time, which will be throwing its considerable might at our hero (and there’s a stock of potential returnees besides, including Berry and Common).

Last time, I couldn’t wait, but I’m feeling a little cooler on this occasion. Aside from the Adjudicator, I don’t think the embellishments to Wick’s world in John Wick: Chapter 3 – Parabellum have been as crazy-cool as the leap from the first to second movies, and some of the plot devices have been downright desperate. As ever, though, Keanu’s hangdog dedication to the part and the balletic abandon of the violence carry us through. Chapter 4 somehow needs to go an extra yard, not so much through upping the budget, but maximising the sense of a man alone against the odds. Alas, I fear that, with so many allies on call, it will be closer to Lethal Weapon 4 in tone than Chapter 2. 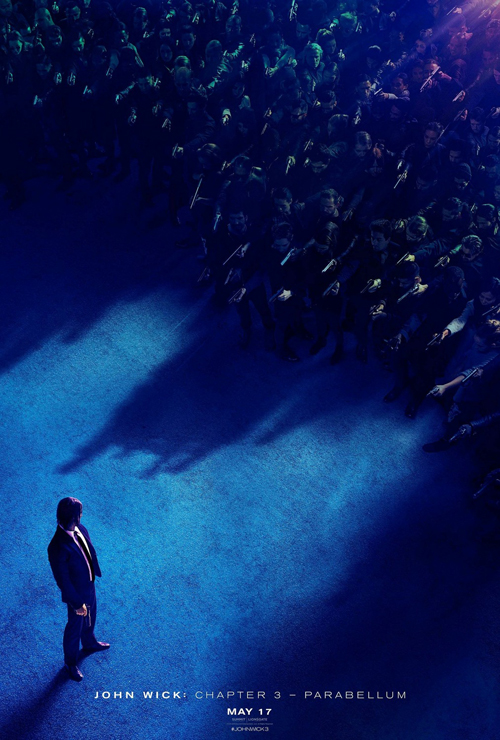