Always keep you bowler on in times of stress. And watch out for diabolical masterminds.

I’d best clear up one thing right away. I like Tara King. Maybe it was my age when I first saw her (eleven or twelve) or being simultaneously made aware of how unbeatable Mrs Peel was, and thus hers was a period I could “have” for myself in some way, but I didn’t perceive the assumed drop in quality. Plus, I liked her slightly dappy, make-do quality. Of course, I can see “objectively” that the relationship with Steed isn’t a patch on that of Emma or Cathy, but its biggest failing is not that it isn’t a match of equals. Rather, it’s the attempt to impress a romantic twist upon it.

Tara: You didn’t say it.
Steed: Say what?
Tara: Rara-rara-boom di-ay.
Steed: I very seldom do.

Macnee admitted he wasn’t initially keen on Thorson’s casting, and purely on the basis of a few sums, he has a point. Blackman was a mere three years younger than Macnee, Rigg a more noticeable sixteen years his junior (that chemistry went along way to plug the gap). Thorson, however, was lagging a tender quarter of a century behind, with the result that anything beyond her idolising him to his bemusement comes across like a creepy uncle, or Sir Rog in For Your Eyes Only.

It speaks volumes that she’s a year younger than Joanna Lumley, who played Purdey more age appropriately in The New Avengers, recognising Steed as very much her senior and so making her flirtatiousness a form of wistful doting. While Macnee quickly got on very well with Thorson, he remained unconvinced of the thrust of their relationship: “[Thorson]’s character loved Steed, but I always thought that was a bad idea. The show was so much better with Steed and his leading lady as sparring equals, without the woman being subservient. But with Linda, it leaned that way”.

The other factor that counts against Tara from the off is her theme. It’s a nice piece in and of itself, but it’s just too much in context, suggesting Tara is exploding with unbridled, sultry passion for Steed (and so the implication that it must be vice versa).

The Forget-Me-Knot generally seems to be regarded as a disappointment, making a scrappy show of sending off Emma and introducing Tara (and Mother). That’s fair, if you go in with unrealistic expectations; it’s certainly wafer thin in terms of plotting. But as lightweight as it is, even by Avengers standards, there’s something very amiable about it, even – or perhaps especially – the dependence on lame amnesia gags and the complete lack of any coherence with regard to the hows and whys of the experiencer’s loss of memory.

Emma: Certainly strange, that we both seem to be suffering from amnesia.
Mortimer: What’s amnesia?
Emma: Loss of memory.
Mortimer: Oh. Who’s lost their memory?
Emma: You have.
Mortimer: Oh, sorry. I’d forgotten.

There were rumours this was a cobbled-together piece of extant Season Five material, something Brian Clemens has denied, attesting he wrote it up when he came in to replace John Bryce, and it was decided a proper handover was needed. The result was Rigg’s material being filmed in a speedy four days. And, for the most part, sharing her scenes with Sean Mortimer (the very game Patrick Kavanagh, later Father Seamus Fitzpatrick in Father Ted). Mortimer, having discovered a traitor in the Organisation (that’s the one Steed works for), has been shot with a memory-removing dart of unspecific effect and duration, hence his being shot repeatedly throughout the episode, and kidnapped.

Emma: I remember the name Steed.
Mortimer: So do I. That must be you then.
Emma: Well it must be me.

There’s nothing very highbrow about the exchanges and riffs between Mrs Peel and Mortimer, but Rigg and Kavanagh have decent comic chemistry, ensuring their extended stay in a cellar is quite breezy. The highlight might be a very silly sequence in which Sean stands on one leg, pulling a silly face to distract a henchman, with Emma proceeding to attack the latter and managing, in the process, to shoot Sean again.

Dr Soames: One drink too many. That’s what’s wrong with him. Give him a sedative.

Rather like the earlier 3.24: The Charmers and its remake 5.9: The Correct Way to Kill, this is a story where agents team up. Although, this time, they’re all on the same side. Tara is instantly in awe of Steed after attacking him while training and can’t believe he’s guilty. Consequently, she goes to his aid when he too is rendered amnesiac and put on the suspect list of being a defector (a very dispassionate doctor – John Lee, 5.3: The Bird Who Knew Too Much – has no interest in what may really be ailing Steed).

Steed: I knew it. The way I opened that lock. I’m a burglar.

Various elements of this don’t really work – why Tara feels she has to give Steed her address, other than it being Chekov’s Address, paying off in a later scene when he needs to find help but can’t remember anything; when Tara is inevitably shot, she turns into an automaton (“Sorry but it’s the rules”) in response to Steed’s pleas, which doesn’t make much sense – but I didn’t have a problem with her mix of resourcefulness and inexperience. And the brick in her handbag is a masterful touch.

Filson: Even the biggest idols can have feet of clay.

Less successful, depending on how you look at it, are the villains. Simon Filson (Jeremy Burnham, 4.1: The Town of No Return, 5.1: The Fear Merchants) is so obviously set up as the defector in Mother’s midst, until you find he isn’t, that he’s never a remotely satisfying red herring. You’re left asking the question, why is he such a bastard? As for George Burton (Jeremy Young, 4.22: A Touch of Brimstone, 5.10: Never, Never Say Die), there isn’t any backstory at all.

This is, of course, the first appearance by Patrick Newell (4.1: The Town of No Return, 5.14: Something Nasty in the Nursery) as Mother. So indelible a presence is he, I’d have likely sworn, before I revisited the show in the ’90s, that he’d also appeared in the last Rigg series. Mother’s a bit more active here than he’ll later be, use ceiling grips to move around his room and fixing drinks himself (he’ll soon have an assistant to do that kind of lowly business for him). He’s instantly such a – welcome – pillar of the proceedings that you wonder how the show ever got by without him.

Emma: And talking of forgetting, just remind me, are you the man who…
Steed: I’m afraid so.

And the fond farewell. While I’m considerably better disposed towards this episode than Avengers Forever, I do agree that the final Steed-Emma scene is in another league. Witty, silly, short and sweet. There’s whatever she whispers to him (above), offering one last piece of obligatory innuendo, and the reaction to the news that Peter Peel’s alive – “Air ace found in Amazonian Jungle” – but that’s merely a prelude to the wistful and wonderful final exchange:

Emma: Always keep you bowler on in times of stress. And watch out for diabolical masterminds.
Steed: I’ll remember. Emma. Thanks.

Steed dropping the formality for that one occasion, and then the punchline reveal: Peter Peel is the spit of John Steed!

It’s easy to understand why Emma’s replacement, based on Steed inviting Mother to choose (“You know my taste. I’ll trust your judgement”), caused disgruntlement with both fans and the presiding cast member, since Rigg was probably an impossible act to follow, no matter who was settled on. As if in acknowledgment of this, the season’s (first set of) end titles aren’t nearly as notable as the previous season’s; they’re trying a little too hard. That is, perhaps, the key. Rigg and Macnee made it look effortless. As appealing as the Tara King era can be, it’s never quite that. 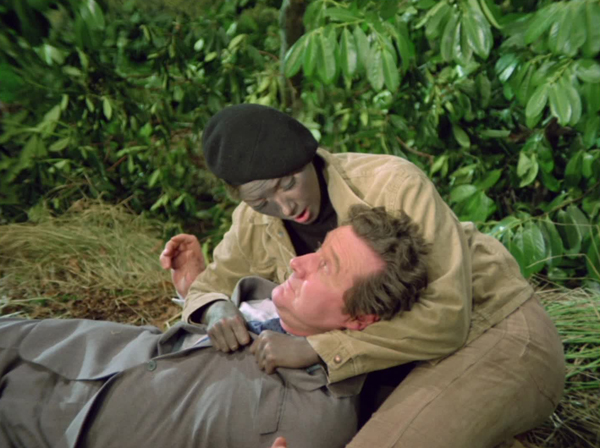 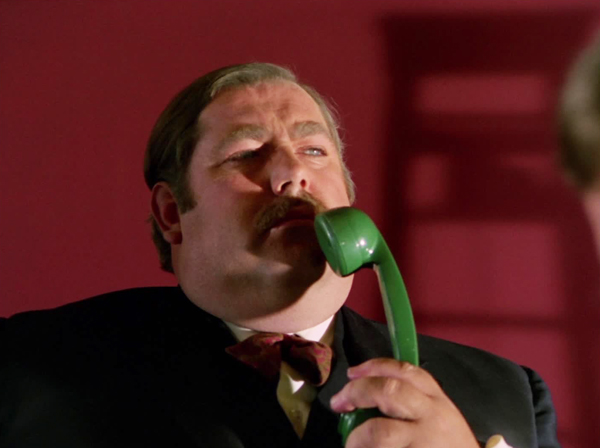 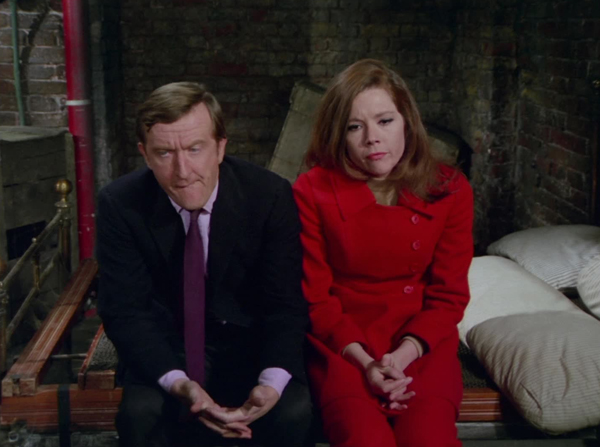 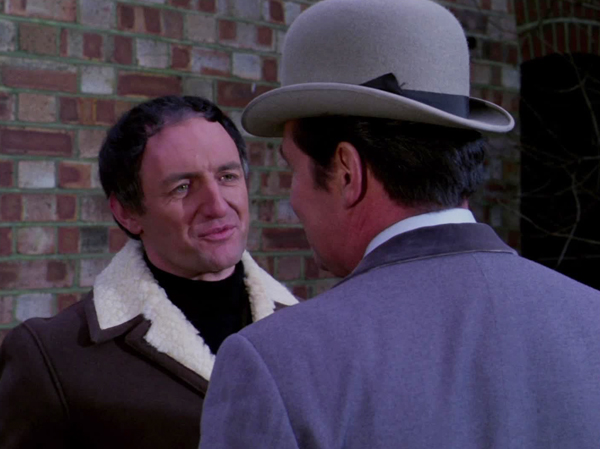 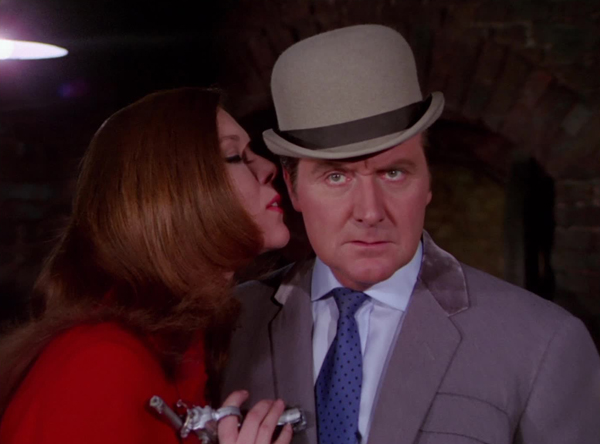 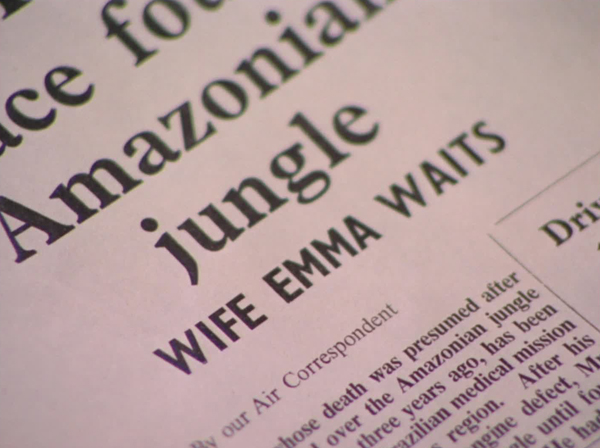 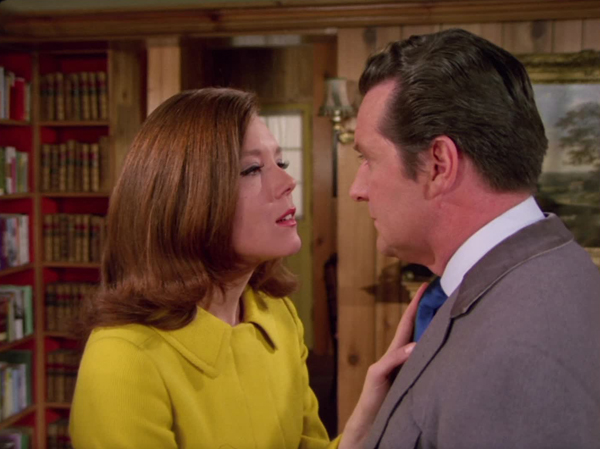 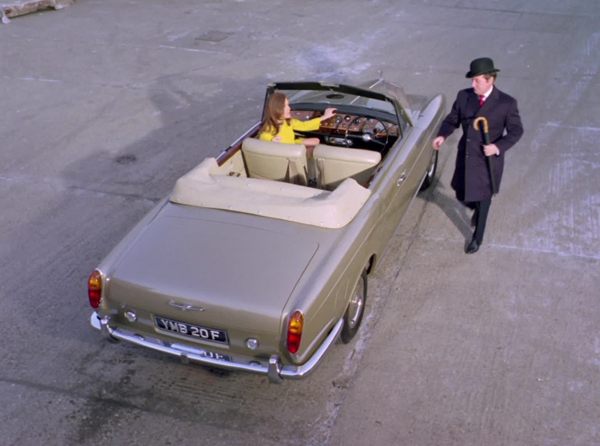 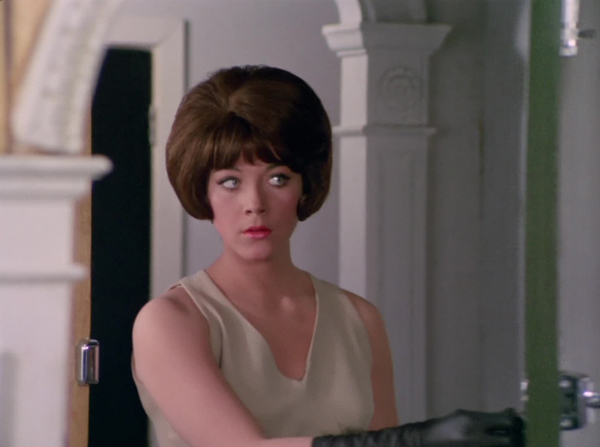 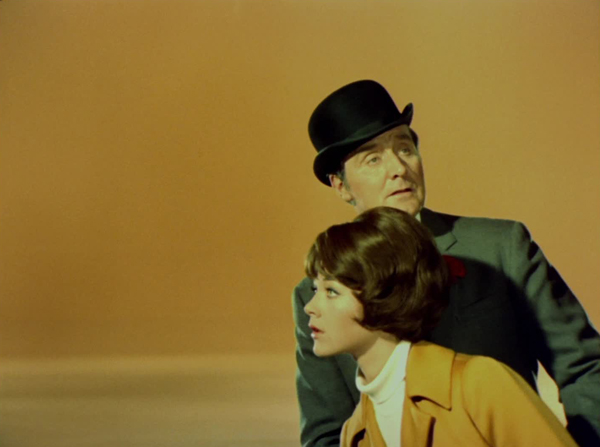