You’re very frank, Clarice. I think it would be quite something to know you in private life.

I was pleased for The Silence of the Lambs’ Oscar glory, a rare genre entry to be bestowed such garlands, even though I didn’t think it was the most deserving of that year’s nominees (that would be JFK, Oliver Stone’s crowning achievement, after which he would never quite be the same again). Indeed, while it’s generally regarded, with hindsight, as one the Academy definitely got right, I don’t think it’s even the best Thomas Harris adaptation.

Maybe it’s simply that I read the novel first, and so I was spoiled for its content, but even though I saw Lambs three times on the big screen, I was never on the edge of my seat, never felt I was reexperiencing the page-turning tension Harris elicited. The film version is a curiously unterrifying affair, failing even to disturb on a psychological level, despite director Jonathan Demme evoking a compellingly brooding, overcast atmosphere, ably assisted by Howard Shore’s foreboding score.

Demme’s The Silence of the Lambs is very much horror as gothic drama, as evidenced by its acting category wins; it’s a case where characters tending to the theatrically larger than life or cartoonish works to its benefit, the over-written rather than naturalistic dialogue delivered with lip-smacking relish by Anthony Hopkins, in particular.

Many of Demme’s creative choices are also in Lambs’ overall favour – it’s nothing if not a crowd pleaser – while peppered with his usual entourage, dating to his Corman days (including Corman himself). These suggest nothing so much as an indulgent John Landis movie and that he had no premonition of the recognition and acclaim it would ultimately receive (compare it to the impersonality of his prestige pictures that followed, accepted into the ranks of Hollywood director royalty at the cost of the idiosyncrasy that made his prior movies so appealing).

Now Manhunter, even given its rather dated (but still rather splendid) soundtrack, is a movie that gets under the skin, one that treats the procedural – rather than horror as gothic drama, it’s horror as police procedural – as central. That is, rather than becoming captivated by its guest-star serial killer. And, despite its neon sheen, it is suffused with singularly unnerving moments and palpable dread. Despite being a visual showman, Mann underplays Harris’ taste for excess to the benefit of the whole; the picture might have been a box office failure, but it has as strong, if not stronger, a personality as Lambs. It’s just that, crucially, it’s a less giving one.

Demme is also restrained in many respects – he certainly avoids the Grand Guignol that Ridley Scott would subsequently bring to Hannibal – yet he simultaneously doubles down in other areas: the seedy, crumbling subterranean prison environment and medieval restraints; the very nature of Hopkins’ showboat performance (most impressive might actually be how Tak Fujimoto shoots the actor, certainly as striking as the Oscar-winning ham himself); the affected preening of Buffalo Bill.

Which, of course, received a fair amount of criticism at the time. In retrospect, while kicking a hot potato doesn’t help, I think it’s less that Harris and co were wading into sensitive territory with the transgender-as-killer theme – Clarice rather clumsily attempts to diffuse this with a few lines – than that Ted Levine’s performance is such an exaggerated display of lisping campness, complete with poodle called Precious.

Hopkins is highly entertaining, of course, amped up to eleven (“Thrill me with your acumen”), but he’s possibly been given too much rope; Lector’s a menace, but he isn’t chilling in the way Brian Cox is. He’s too warm, too debonair, too chummy. Ted Tally services him with nothing but choice lines – “I myself cannot” in response to Multiple Miggs’ crude suggestion to Clarice that “I can smell your cunt”; “Love the suit” to the senator – and a winning irreverence. It’s the clearest evidence that Demme’s roots lie in exploitation cinema.

In contrast, Starling’s unadulterated, overwrought earnestness is almost too much of a different order, thus encouraging our siding with Lecter’s infectious cynicism and wit. She’s much better as an identification figure during the tail end’s protagonist-in-peril than showing off her guilelessness in the Lector meet cutes.

The plotting, at times, is retrospectively forehead-slapping – what a tiny, tiny universe of interconnected killers Harris has created, whereby Lector just happens to know the psycho about whom he’s being consulted – while Lector proffers the kind of clues and verbal plays that suggest he knows he’s in a work of fiction.

The dark memory of the Lambs’ titular centrepiece confession meanwhile, is rather trite cod psychology, not something one can imagine the disgraced therapist would genuinely get a kick from. And as for the wrong house being SWAT teamed, that was, to my recollection, a familiar twist even then. But there’s some good interplay between Foster and Glenn (“Do you think he wants to fuck you?” primes us for just one wrongly positioned intonation from the latter), and Anthony Heald is simply marvellous as legend-in-his-own-mind Dr Chiltern.

The Silence of the Lambs, of course, spawned both the ’90s serial-killer genre boom and that of the FBI hero protagonist (okay, Dale Cooper came first, but then there was Fox Mulder), so it has a lot to answer for. Even more in the clamour for a sequel, which ended up seeing Harris, if not killing his children, then perversely besmirching them. If he’d been sensible, rather than desperate to divest himself of the responsibility and so give the public something they didn’t want, he would have dispensed with Clarice for the third Lector instalment the way he unceremoniously did Graham following Red Dragon.

Generally, I’d say The Silence of the Lambs holds up. It hasn’t dated so much as the tropes it spawned now make it seem so much more familiar than it was at the time, but it was never quite the work of unsung genius its reputation suggested. 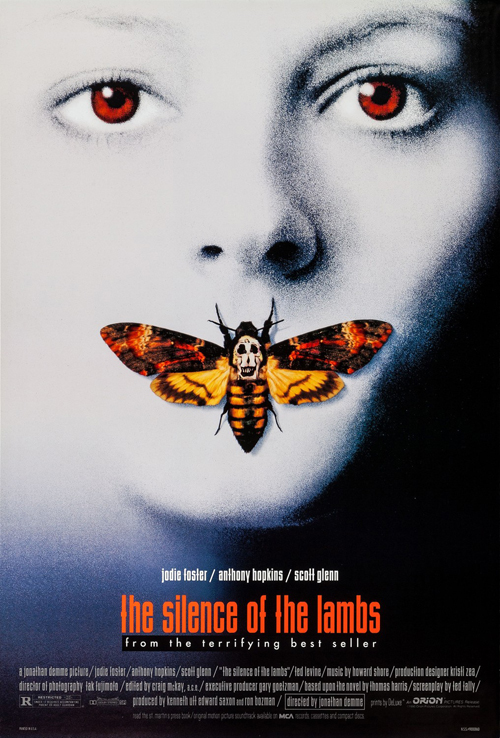