Why would I turn into a filing cabinet?

All superhero movies are formulaic, to a greater or lesser degree. Mostly greater. The key to an actually great one – or just a pretty good one – is making that a virtue, rather than something you’re conscious is limiting the whole exercise. The irony of the last two stand-alone MCU pictures is that, while attempting to bring somewhat down-the-line progressive cachet to the series, they’ve delivered rather pedestrian results.

Of course, that didn’t dim Black Panther’s cultural cachet (and what do I know, swathes of people also profess to loving it), while Captain Marvel has hit half a billion in its first few days – it seems that, unless you’re poor unloved Ant-Man, an easy $1bn is the new $700m for the MCU – but neither’s protagonist really made that all-important iconic impact.

There have been various theories on why this is, perhaps the most common being that the fractured nature of her tale – an amnesiac gradually piecing her memory and supreme potential back together – rather impaired her chances of hitting the ground running as a fully conceived character. I’m not sure I really buy this, in that the movie’s structure had the potential for a relatively fresh take on an origins story, if only there’d been more attention to making the mystery compelling and pushing the plot along (Memento comes to mind, where that lack of self-knowledge drives the story).

Carol rather listlessly comes across who she is/was, with convenient flashes of information here and there: nothing that really makes you sit up and take notice. Indeed, for Marvel’s most super-powered superhero – I mean, she pretty much is, isn’t she? – there’s something curiously indifferent about the project. Brie is fine, but like Chadwick Boseman’s T’Challa, there’s little for her to chew on, and what there is is of the corniest “control your emotions/unleash them to realise your potential” variety (that “get back up again” montage is processed cheese incarnate).

Which is why her arc doesn’t land. It’s both over-familiar and artificially foisted upon her; with any other superhero who has really taken off on the big screen, you can be sure their sense of conflict/arc has actively translated. Carol Danvers has been rather too schematically planned out, and as a result, she isn’t terribly interesting.

In terms of plot, the strongest element only peripherally relates to Captain Marvel, by virtue of her being duped: the Kree, who have trained her as a warrior, aren’t guardians of peace and justice at all, but aggressors bent on exterminating the reptilian, shapeshifting Skrulls (good lizards? What the…?)

Accordingly, both Jude Law, as initially hard-but-fair mentor Yon-Rogg, later revealed as bastardly, and particularly Ben Mendelsohn as initially dodgy interrogator Talos, later revealed as a sympathetic family lizard man, are more engaging presences than the lead (which is not to say the Skrulls-Kree conflict stuff is any better fleshed out, as a whole, than say the world of Green Lantern).

I was a little disappointed that the paranoia potential of the Skrulls wasn’t developed more, but that makes sense in retrospect as (a) the Skrulls are good guys here and (b) it sets up a flip for the inevitable Secret Invasion movie. It’s a nice touch to have both Law and Mendelsohn use their natural, non-RP accents, but most of all, it was nice to see Mendelsohn, typecast as a go-to Hollywood villain (well, it’s his fault really, for accepting the parts), getting to play a good guy and be really funny.

Indeed, if there’s one thing that saves this movie from descending into the forgettable, it’s mining that patented Marvel seam of humour. Which is to say, it’s very formulaic humour, like the movie itself, but it provides a lift that the competently staged (by the second unit, no doubt) but disappointingly sluggish action can’t; there’s one strong pursuit scene in an underground facility, but that aside, you’d be hard pressed to single out anything great. Certainly not Captain Marvel’s “becoming”.

This is easily the best time Samuel L Jackson’s had in a Marvel movie, playing a version of himself a good decade younger than he actually was in the ’90s, by the look of the actually pretty good de-aging. Agent Coulson doesn’t fare so well, but mercifully the character’s barely in it. Fury’s very much the sidekick to Danvers, and while he works well (“If toast is cut diagonally, I can’t eat it”), there’s a vague annoyance when an emerging character is so engulfed by continuity that they don’t get the chance to take those all-important baby steps on their own. The presence of SHIELD here most hearkens back to their intrusive presence in Phase One, and if it weren’t for Fury being an enjoyable element – as opposed to an extraneous one, back then – it would grate just as much.

Also in his favour is his making best friends with cat-shaped alien/Flerken Goose (“It’s a cat, not Hannibal Lecter”), possibly the highlight of Captain Marvel (though, the tentacled maw thing is a bit over-used design-wise at this point). Still, it’s odd that Boden, Fleck and Geneva Robertson-Dworet – credited with inert Tomb Raider reboot, but also prospectively penning Gotham City Sirens, Sherlock Holmes 3 and a new Dungeons and Dragons, so maybe she was very unlucky first time out – should choose to undercut Fury by having Goose be responsible for his loss of sight in one eye. I mean, it’s funny, but it’s still a surprising choice.

How do Boden and Fleck fare? Well, okay… I mean, there’s absolutely no evidence of style or personality anywhere in the movie (honestly, I’m surprised they even have a screenplay credit, since there’s nothing remotely as distinctive as their work on Half Nelson). Captain Marvel seems entirely made to order, nothing more so than the half-hearted attempts at ’90s nostalgia, which principally consists of a Blockbuster drop-in and some sadly unimaginative and intrusive needle drops on the soundtrack (Come as You Are and Just a Girl being the most egregious).

There seems to be a wide range of takes on the MCU directors, with little consensus on who’s handled their house-style requirements most heroically – I’d pick Shane Black, Jon Watts, James Gunn and Scott Derrickson, while I’m contrastingly not overly impressed by star journeymen the Russo brothers – but few can disagree at this point that, whatever the DCU’s deficiencies, and let’s face it they’re writ large in basic storytelling, they aren’t afraid to let filmmakers lead the way, rather than the producer.

Captain Marvel doesn’t turn up the feminism dial to eleven particularly, which might be to its credit – Maria’s flying the gender-warfare flag more pronouncedly than Carol – or perhaps to Marvel’s sheepishness, since it’s taken them so long to get there. There’ll be those who read topical commentary into the thing in dribs and drabs, but that kind of tack only invites a spotlight on its essential shallowness. Indeed, anyone looking for a progressive message here needs only observe how refugees and minorities congregate in awe around another white saviour figure. Don’t tell Brie that, though, or she’ll get right mardy with you. Captain Marvel will do, and has the box office to prove it, but that shouldn’t really cut it. 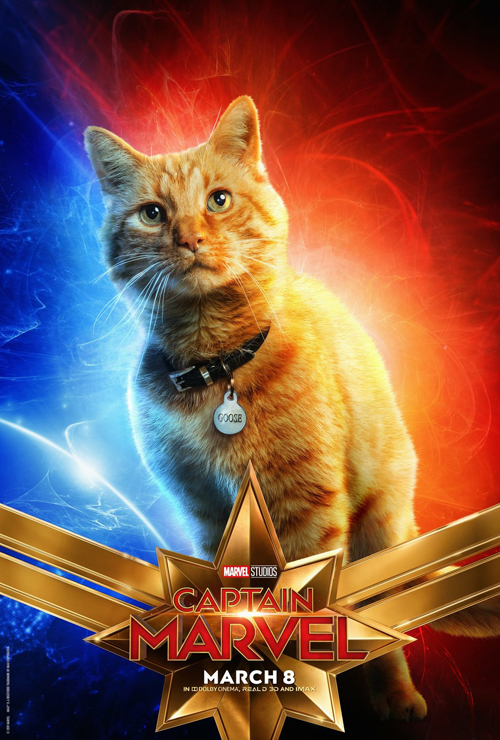