Trouble’s part of the circus. They said Barnum was in trouble when he lost Tom Thumb.

Anyone of a mind that the Oscars cynically crowning underserving recipients is a recent development should take a good look at this Best Picture winner from the 25th Academy Awards. In this case, it’s generally reckoned the Academy felt it was time to honour Hollywood behemoth Cecil B DeMille before it was too late, since he was, by that point, into his seventies and unlikely to be jostling for garlands much longer. Of course, he then only went and made a bona-fide Best Picture contender, The Ten Commandments. And only then pegged it. Because no, The Greatest Show on Earth really isn’t very good.

Indeed, it often enjoys a comfortable residency in lists of the ten worst Best Picture winners. Empire published one such in 2005 that placed Greatest Show third (behind the well-deserved Braveheart and A Beautiful Mind; other more contentious appearances included Ordinary People, Terms of Endearment, Rocky and How Green Was My Valley). Premiere’s 2006 ranking cited Chicago and Oliver! but also, mystifyingly, My Fair Lady. Both featured Around the World in 80 Days, another where it’s difficult to argue the Academy wasn’t rewarding size over content.

Which is to say Greatest Show’s probably not really very much worse than many a consciously constructed epic styling of the classical Hollywood period, and it seems it delivered the goods in terms of box office, always a positive in boosting a ceremony (reputedly, it was the most successful film of the year in the US).

Imagine a slow-moving stodge with a smattering of big names and laborious efforts at incident to enliven matters; the four credited writers were doubtless doing their best to meet Cecil’s demands, but shorn of the period trappings and pomp of his better-known efforts, Greatest Show is left looking rather bashful and bereft. DeMille comes armed with the big idea: a circus movie! But that’s where inspiration promptly exits.

Perhaps part of the problem is the inherent difficulty of translating the audience-pleasing antics of one medium to another. With the theatre, you’re either adapting plays or you’re focussing on the conflict that comes with staging them: the people. Greatest Show is compelled to do likewise, so it’s inevitably found wanting when DeMille stops for extended interludes showing the acts and the audiences’ reactions thereto (even the pressures of making ends meet and the attentions of a competing circus owner seem somewhat incidental, rather than a seriously meaty plot thread).

While it’s about a Barnum circus, this isn’t about Barnum himself, so Greatest Show markedly diverges from the recent, similarly titled but not very Oscar-troubling The Greatest Showman. There’s no magnificent compere boosting proceedings, which may have been a fatal mistake. Instead, we get Chuck Heston as brooding, steadfast manager Brad Braden, caught in a love triangle with flyer Holly (Betty Hutton) and smooth-talking star trapezist The Great Sebastian (Cornel Wilde doing his best Pepe le Pewe; Wilde would go on to direct The Naked Prey – which he also starred in – as well as dystopian John Christopher adaptation No Blade of Grass). There’s also Gloria Grahame as elephant girl Angel (not in the John Merrick sense), with her eye on anyone who isn’t obsessive elephant trainer Klaus (Lyle Bettger).

Cue various emotional entanglements and fraught declarations of dedication, which might have worked better had Hutton any presence beyond a gosh-darn American-as-apple-pie Doris Day persona (and yet, Holly still comes across as fecklessly fickle in her attachments, switching professions of love at a bewildering rate). Grahame’s much better as the bad girl who naturally ends up with bad boy Sebastian (and his gammy hand) when the dust has settled; the best line relates to her, as Chuck announces, impressed, “You know, I never knew a woman who could fill a pipe”.

Also popping up, rather thanklessly, is Dorothy Lamour (her penultimate Road movie was released the same year, the last being the unwanted and unfunny Road to Hong Kong a decade later). But no, I didn’t spot Hope and Crosby in the crowds. Oh, and Jimmy Stewart’s there too, as Buttons the Clown (“Clowns are funny people, Holly. They only love once”), operating on the hilariously daft, only-in-the-movies conceit of a performer who never takes off his makeup… on account of being a former doctor on the run, after having euthanised his dying wife (the Fed tracking him down is working off a hunch that Stewart had always wanted to join the circus as a boy!)

At one point, poor proud Sebastian, show off that he is, decides to perform net-free and comes a cropper. He’s duly left with a twisted, immobile hand (“Flyers have fallen before. They will again. He won’t die”); it’s Buttons, no doubt keeping up with his subscription to current medical journals, who discerns the limb’s no write-off and a full recovery is possible (the incident also inspires possibly the picture’s most hopeless line, as Holly announces “It wasn’t your arm I fell in love with. Or your head. I fell in love with you”).

None of this is remotely sufficient to grant DeMille’s cinematic event a head of steam, so he deduces he needs additional spectacle, not of an extraordinary feat in the ring but a train crash, for the final act (really, this thing runs with all the well-wrung logic of a desperate soap opera). One caused by the spurned Klaus and dodgy concessionaire Harry (John Kellogg). Curiously, this misses out on any Chuck heroics; instead, he’s laid low with a spurting artery, and Buttons has to operate (and in so doing reveal his true identity). And still the show must go on!

I may have maligned the love triangle (or quadrilateral), but at least there’s a kindling of tension between Heston and Wilde, something the picture desperately needed more of. One gets the sense that DeMille was able to keep churning out epics on the basis that, if audiences who didn’t often go to the cinema were going to see a movie, one movie, that year, it was going to be a big one. Consequently, he rarely failed to reap rewards.

The Greatest Show on Earth is too pedestrian to be labelled actively bad; it just hangs there limply – to quote Brad Braden, I think DeMille had “stardust mixed up with sawdust” – and it’s telling that, while DeMille earned an Oscar as producer, he was pipped as Best Director by John Ford for The Quiet Man (no one was a slouch in the category that year, with John Huston, Fred Zinneman and Joseph L Mankiewicz all getting nods).

High Noon was the favourite to win outright – certainly, it and The Quiet Man are in another league to Greatest Show – but had to settle for song, editing and Gary Cooper. Notably, Grahame also took home an Oscar, but for The Bad and the Beautiful rather than this. One of the worst winners, then? It likely won’t actively irk you the way, say, A Beautiful Mind should, but it might just send you to sleep. 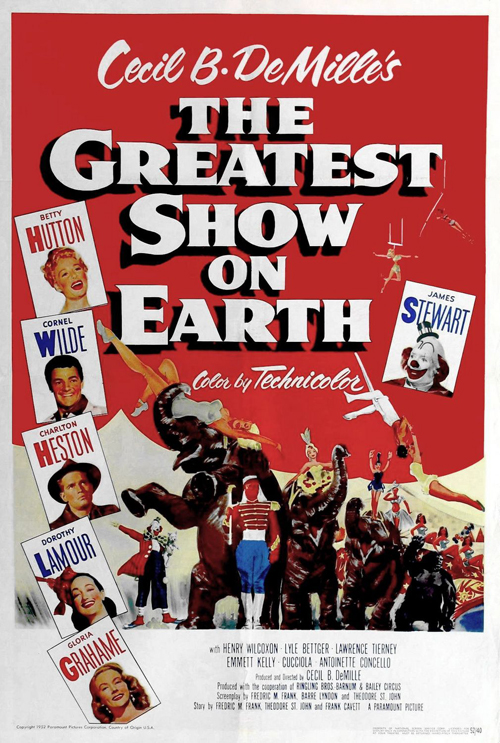