Sorry I’m late. I was taking a crap.

In any given list of the best things – not just movies – ever, Mark Kermode would include The Exorcist, so it wasn’t a surprise when William Friedkin’s film made an appearance in his Nine films that should have won Best Picture at the Oscars list last month. Of the nominees that year, I suspect he’s correct in his assessment (I don’t think I’ve seen A Touch of Class, so it would be unfair of me to dismiss it outright. If we’re simply talking best film of that year, though, The Exorcist isn’t even 1973’s best horror; that would be Don’t Look Now). However, he’s certainly not wrong that The Exorcist “remains a superior work” to The Sting; the latter’s one of those films, like The Return of the King and The Departed, where the Academy rewarded the cast and crew too late. Butch Cassidy and the Sundance Kid is the masterpiece from George Roy Hill, Paul Newman and Robert Redford, not this flaccid trifle.

I’m usually quite partial to con and caper movies, but The Sting is, for the most part, flat and indulgent, coasting on the knowledge of an audience ready and willing to see the unbeatable Newman-Redford double act again. It’s a long film, but it feels longer, marked by a crippling absence of internal tension – aside from the few occasions where Redford’s Johnny Hooker is being pursued by cops or gangsters – and a lack of real flair with the twists and hoodwinks.

Redford, like Daniel Craig in Casino Royale, is on the backfoot from the off; he’s supposed to be playing a capable novice but was a ripe 37 at the time. Thus, the highlight is probably Newman’s Henry Gondorff, putting on a drunk act during a high-stakes poker game and so thrashing Robert Shaw’s crime boss Doyle Lonnegan. But that’s just a prelude, a means to encourage Shaw’s fish to take the bait, and what follows is too effortless.

You need to believe the villain of the piece is formidable, but aside from being played by Robert Shaw – which admittedly does a lot of heavy lifting – Lonnegan’s a pushover (Charles Durning is good value as the plod after Johnny, but it’s the kind of thing he did in his sleep). Soderbergh’s Ocean’s 11 didn’t present a huge number of obstacles either, but the director knew to keep that one moving, to juggle the stars and scenarios to breezy effect. Here, the title sets up a certain degree of expectation, daring us to be impressed by its con artists’ virtuosity; The Sting desperately needed plot intricacy, of the kind David Mamet could deliver, where you’re in awe of someone able to pull the rug from under you so conclusively (House of Games).

Why didn’t they go to William Goldman (who would, two decades later, dabble in the con genre with Maverick) and thus make the Butch and Sundance reunion complete? Presumably, because The Sting’s was a found screenplay, courtesy of David S Ward (later responsible for… nothing especially good, although like Goldman, he would attempt to cash in on his big hit with a sequel). It appears Rob Cohen was a reader for Mike Medavoy at the time and extolled the script’s virtues to his boss. Given Cohen’s subsequent track record as a director, there’s inverse reason to see his pick as indicative of quality.

Butch and Sundance exuded a sense of time and place and character, and one can put that as much down to Hill as Goldman, but here, such keenness appeared to desert him. The world of The Sting doesn’t feel remotely lived in; its stars play dress-up in their ’30s duds, only ever looking costumed, and parade around sets that feel like sets (probably because they were; it was (mostly) filmed on the Universal backlot.

Some of that might have been pertinent, were there a line between the fakery of the scam being pulled on Lonnegan and the grit of Chicago, but Redford (who somehow garnered a Best Actor nomination) and Newman have all the authenticity of stars who have just exited the makeup chair.

Pauline Kael: I don’t respond to their arch love games… I would much rather see a picture about two homosexual men in love than see two romantic actors going through a routine whose point is that they’re so adorably smiley butch that they can pretend to be in love and it’s all innocent.

Pauline Kael got a little side-tracked by the leads’ iconography in her review, to the extent that she didn’t really pick up on their not really putting in very much effort (she didn’t like Butch and Sundance, so there wasn’t an iota of a chance she’d have liked this). Redford and Newman don’t even share the screen for large portions of The Sting, and lack the easy camaraderie of their previous pairing. Sure, you don’t want them just stirring and repeating… Or maybe you do? Either way, as the kid and the old pro, there’s nothing more than a vague shape for them to impress themselves upon, so they’re more memorable for their duds than anything they do; the sting itself is over in a flash, and you end up shrugging at the obvious ruses and asking “Was that it?”

Apparently, Ward’s screenplay was darker than the “playful homage” Hill pursued. In terms of box office, you can’t fault the director’s instincts, just the effectiveness of the results (it has a similar slovenly smugness to the later Dick Tracy). Clearly, the Academy loved it as much as general audiences. But then, it was a much sweeter pill than a Bergman or sensibilities-disturbing, New Hollywood horror flick. Far be it from me to nod respectfully to the Golden Globes, but in both cases where they have failed even to nominate a Best Picture Oscar winner (the other being Crash), they’ve been on the money (The Exorcist won the Globe that year for drama, while American Graffiti took comedy or musical). 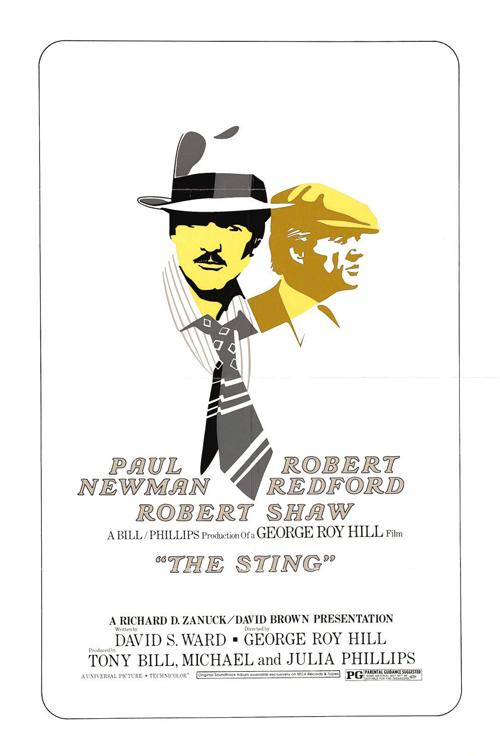 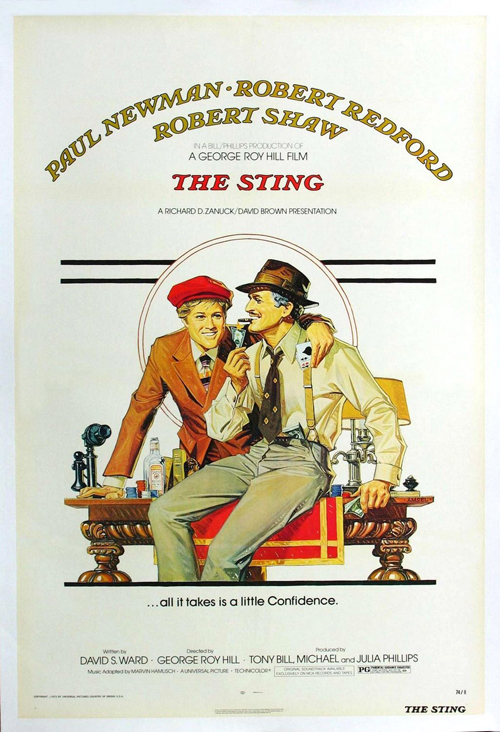