John Hughes’ greatest, most lasting contribution to western civilisation. Time Out’s Ferris Bueller’s Day Off review opined that it was unfortunate no one got to ring the little bastard’s neck, and a number of critics have taken issue with the movie’s apparent unchecked materialism: a teenager running amok, unfettered, in the avaricious ’80s and getting away with it. Which is fair comment; one might regard Ferris, his aspirations and achievements, as the inevitable end product of such self-involved, me-centric “progress”. Which is also why the movie is both hugely satisfying and simultaneously entirely empty.

What isn’t often recognised about Bueller is how masterful Hughes’ screenplay is. It’s so perfectly structured and judged, scene-by-scene, one might almost imagine it as the outcome, were the Coen brothers ever to make an upbeat, frivolous teen movie (and you can see a not-completely-dissimilar cartoonish energy in their Raising Arizona the following year).

One might charitably view Ferris’ statement as valuing individuality over mass conformity and hive-mentality, except that his expression of self-belief is lying, cheating and stealing to win out. Without a conscience. If he treats his parents that way, and manages to bring on board even those who don’t believe in him – his sister, most of all, who recognises the insidious nature of his influence – then there’s no stopping him; he is Damien Thorne. Ferris Bueller embodies the free passes and charmed lives lived by the privileged elite, and we cheer him on. There are sops here, of course – the privileged kid is both drink and drug free on his day of abandon, and if not chaste, then non-carnal – but that’s in the nature of the bubble-gum frivolity of Hughes’ confection.

Ferris: You think I don’t care?
Cameron: I know you don’t care.

Cameron, meanwhile, is characterised by existential dread at the meaninglessness of Ferris’ – and thus civilisation’s – empty-minded contentment (it has been suggested that Ferris, Fight Club-style, is a figment of Cameron’s id, which is a nice idea… until you begin to analyse it). Ferris knows just how to get ahead, to beat the system, to thrive on it and its corrupted avenues. Cameron blanches at that – there’s “Nothing good” there, or anywhere, as he observes – but ultimately lets his friend and user off the hook; his choice is thus the hinge upon which Hughes’ film lives or dies. Cameron professes that what his friend has done is okay.

I don’t remotely buy into the idea that Ferris is helping Cameron out of a suicidal depression. Everything Ferris does and says in that regard is his excuse for having a good time. If he really cared about his pal, he’d never have borrowed his dad’s car in the first place. That is, unless he knew he was in a movie and everything would work out in the end because John Hughes was scripting it… Which I suppose he does, since he addresses the camera throughout. But in that case, attempting to scrutinise the movie in terms of the lead character’s moral underpinnings is pointless either way. He’s simply an avatar for whatever is required for self-reflexive fun at any point.

Rooney: I did not achieve this position in life by having some snot-nosed punk leave my cheese out in the wind.

Of course, Principal Rooney is also aware of his own limitations, much as Cameron is, but the system has already collapsed in upon him; he is thus fuelled by resentment, rather than despair. That’s why, while Ferris is guilty of contempt through failing to consider others, Rooney is actively worse through wishing ruin on his nemesis’ very life.

It’s a shame one can’t help but be conscious of Jeffrey Jones’ extra-curricular activities when seeing his performances now; his comic timing is flawless, and it’s very easy to get on board with Rooney’s doomed, Wylie Coyote attempts to catch his Road Runner, to increasing physical dereliction as the day progresses. He’s gifted some great lines along the way, too (“You just produce a corpse and I’ll release Sloane” and “Tell ya what, dipshit. If you don’t like my policies, you can come on down here and smooch my big ol’ white butt”, both preludes to crushing deflation).

Jeanie: Why don’t you put your thumb up your butt?

Indeed, while Ferris may be morally dubious in his take-take manner, he’s quite generous when it comes to apportioning the funniest moments in his movie. He’s the straight man, in a sense, and around him is a whirl of a larger-than-life characters, Sloane (Mia Sara) aside. Although, even she gets an amusing moment involving his dad “licking the glass and making obscene gestures with his hands”.

Jeanie’s rage-driven crescendo sees Jennifer Grey on comic form not seen since (and definitely not recognisably, what with her career-flummoxing rhinoplasty); she’s utterly delightful when letting out a giddy laugh, on taking her leave of Charlie Sheen’s wastoid (as with Cameron, Hughes foists forgiveness of Ferris on her. Albeit understandably, as she is high on Charlie’s tiger blood).

Ferris: We ate, we ate pancreas.

Ruck, who’d co-starred with Broderick in Biloxi Blues on Broadway (they didn’t get to do the film together, though), is a completely convincing thirty-going-on-seventeen, and his delivery of “Pardon my French, but you’re an asshole!” is all the funnier for the expression on his face when he says it. Edie McClurg is similarly note-perfect as Grace, her signature moment being the “They all love Ferris” speech.

And Hughes as a director is at his most freewheeling and inventive (Broderick suggested “a lot of that movie was really polished up in post”). Much of what we see here would feed into the broader slapstick of Uncle Buck and Chris Columbus’ Hughes-written and produced Home Alones, but there’s a more encompassing, energised flow to the visuals here, from the also-entirely-self-serving jaunt taken by the wage-slave garage guys – whom Ferris treats dismissively, and Cameron suspiciously, such that they prove reactive in both respects – to the accompaniment of the Star Wars theme, to the performance of Twist and Shout, to the chase home (Sergio Leone-spoofing close-ups of eyes, two years before Joe Dante outright homaged him in The ‘Burbs). And the gorgeous art gallery interlude, with Dream Academy’s version of The Smiths’ Please Please Let Me Get What I Want showing what can be done with their tunes when you don’t have to listen to Morrissey as part of the package.

Sloane: Ferris can do anything.

So yes, Ferris Bueller’s Day Off is an uplifting work of genius despite all this – you really believe he is going to marry Sloane – despite its lead character being a spoilt, self-regarding little bastard. A sequel was mooted for a spell, but Broderick and Hughes decided it was “a singular time” that couldn’t be repeated; Ruck’s idea for a follow up was a sort of Last of the Summer Buellers, with Cameron in a nursing home and both friends now in their seventies. Which is pretty neat, but with the sadly early expiration date of Hughes, it’s doubtful any will want to go near his legacy (aside from inevitably remaking it).

This is easily his best movie, rising above its teen stablemates by virtue of an inclusive knowingness and lack of (overt) sentimentality, and also bettering his later more adult (and also child-centric) spins. Is Ferris Bueller a righteous dude? No, but we’ll keep pretending he is. That’s part of his charm. 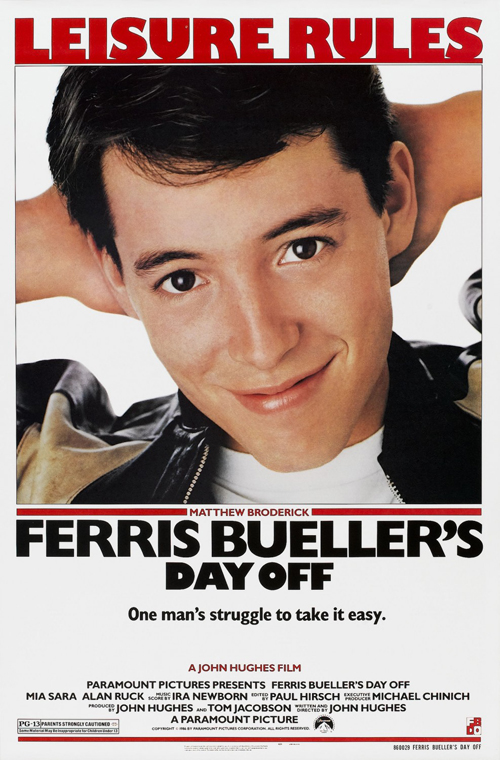